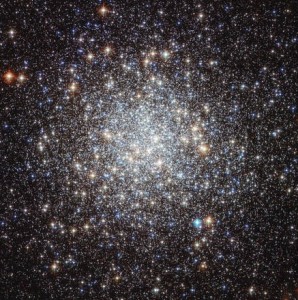 The photograph above was taken by the Hubble Space Telescope and shows hundreds of thousands of glittering stars shining in a globular cluster at the center of our galaxy.  The cluster is called Messier 9, and contains hordes of stars swarming in a spherical cloud about 25,000 light-years from Earth. The object is too faint to be seen with the naked eye, and when it was discovered by French astronomer Charles Messier in 1764, the scientist could only resolve it as a faint smudge that he classified as a nebula (“cloud” in Latin).

Now, though, the Hubble Space Telescope is powerful enough to make out more than 250,000 individual stars in Messier 9, in a new picture released on March 16. The bluer points indicate hotter stars, while the redder stars are cooler.

Below is a video from www.spacetelescope.org on Messier-9.