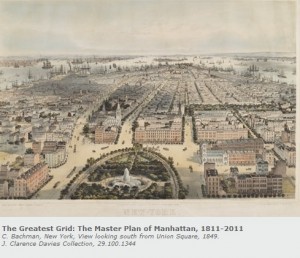 The New York Times has a review of The Greatest Grid: The Master Plan of Manhattn, 1811-2011, an exhibit at the Museum of the City of New York.  The exhibit celebrates the 200th anniversary of the Commissioners’ Plan of 1811, the foundational document that established Manhattan’s famous street grid. Featuring an original hand-drawn map of New York’s planned streets and avenues prepared by the Commission in 1811, as well as other rare historic maps, photographs and prints of the evolution of the city’s streets, and original manuscripts and publications that document the city’s physical growth, the exhibition examines the grid’s initial design, implementation, and evolution. The Greatest Grid traces the enduring influence of the 1811 plan as the grid has become a defining feature of the city, shaping its institutions and public life.

The review quotes Hilary Ballon, a professor of urban studies and architecture at New York University who organized the exhibition who

“adds that it even affects our daily behavior. ‘We cross at corners with the grid,’ is her example. That’s not quite the New York I know, but it’s true that when we jaywalk or take shortcuts across plazas or stroll down Broadway, we are aware of violating the grid. The grid is the ego to our id.

And for the same reason we’re conscious of the street wall, the regular line of building facades, so that when one building is set back and breaks that line, our equilibrium is disturbed. (See the erratic sidewalk of 57th Street.) Like the neighborhoods it circumscribes, the grid has its integrity.”

Those of us who have lived and worked in New York and who walk as much as possible to enjoy its streets and avenues understand well the beauty of “The Grid”.