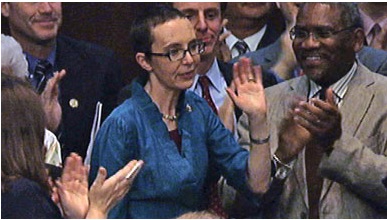 The House of Representatives voted yesterday in favor of the bill raising the debt Ceiling and all but assured that it will become law today and in time to ward off the dire fiscal consequences predicted for the American economy.  However, as the vote was being taken last night, the real human interest story  was the appearance of Representative Gabrielle Giffords in the House chamber for the first time since being shot in the head by an assassin seven months ago.  The Huffington Post described the scene when she cast her vote as:

“Giffords entered the chamber to sustained, standing applause, shaking hands with colleagues whom she had not seen since that January day. Her vote, a sideshow to the far more important and compelling personal drama, was in favor of the bill, which passed through the chamber by a margin of 269 to 161.”

It was quite an emotional scene watching her colleagues come to her seat, many of whom embraced and kissed her.