All the media outlets are headlining the news that the U.S. House of Representatives has reached an agreement to extend the payroll tax credit.  The New York Times for instance is reporting:

“Bowing under intense pressure from members of their own party, House Republican leaders agreed Thursday to accept a temporary extension of the payroll tax cut, beating a hasty retreat from a showdown that Republicans increasingly saw as a threat to their election opportunities next year.

John A. Boehner, the speaker of the House, announced on Thursday that Republicans had reached an agreement on the payroll tax cut. Under a deal reached between House and Senate leaders, the House will now approve as early as Friday the two-month extension of a payroll tax holiday and unemployment benefits approved by the Senate last Saturday, and the Senate will appoint members of a House-Senate conference committee to negotiate legislation to extend both benefits through 2012.

House Republicans — who rejected an almost identical deal on Tuesday — collapsed under the political rubble that has accumulated over the week, much of it from their own party, worried that the blockade would do serious damage to their appeal to voters.”

Would it not have been more statesmanlike  if they had approved this extension because it is beneficial to American families in these hard economic times and not simply to prevent damage to their party’s election opportunities.

David Brooks in his New York Times  column today continued reviewing the best magazine essays for 2011.   Among others, he highly recommends The Rise of the New Global Elite” by Chrystia Freeland that appeared in The Atlantic in January/February 2011.   To give a gist of the essay, here is an excerpt:

“This widening gap between the rich and non-rich has been evident for years. In a 2005 report to investors, for instance, three analysts at Citigroup advised that “the World is dividing into two blocs—the Plutonomy and the rest”:

In a plutonomy there is no such animal as “the U.S. consumer” or “the UK consumer”, or indeed the “Russian consumer”. There are rich consumers, few in number, but disproportionate in the gigantic slice of income and consumption they take. There are the rest, the “non-rich”, the multitudinous many, but only accounting for surprisingly small bites of the national pie…

But the financial crisis and its long, dismal aftermath have changed all that. A multibillion-dollar bailout and Wall Street’s swift, subsequent reinstatement of gargantuan bonuses have inspired a narrative of parasitic bankers and other elites rigging the game for their own benefit. And this, in turn, has led to wider—and not unreasonable—fears that we are living in not merely a plutonomy, but a plutocracy, in which the rich display outsize political influence, narrowly self-interested motives, and a casual indifference to anyone outside their own rarefied economic bubble…

What is more relevant to our times, though, is that the rich of today are also different from the rich of yesterday. Our light-speed, globally connected economy has led to the rise of a new super-elite that consists, to a notable degree, of first- and second-generation wealth. Its members are hardworking, highly educated, jet-setting meritocrats who feel they are the deserving winners of a tough, worldwide economic competition—and many of them, as a result, have an ambivalent attitude toward those of us who didn’t succeed so spectacularly. Perhaps most noteworthy, they are becoming a transglobal community of peers who have more in common with one another than with their countrymen back home. Whether they maintain primary residences in New York or Hong Kong, Moscow or Mumbai, today’s super-rich are increasingly a nation unto themselves.”

A nation unto themselves indeed!

The New York Times is reporting that the Pearson Foundation is being investigated by the New York State attorney general in connection with paid trips to NYS education department officials.  Specifically the article states:

“The office of the attorney general, Eric T. Schneiderman, issued subpoenas this week to the [Pearson] foundation and to Pearson Education seeking documents and information related to their activities with state education officials, including at least four education conferences — in London, Helsinki, Singapore and Rio de Janeiro — since 2008, according to people familiar with the investigation.

At issue is whether the activities of the tax-exempt Pearson Foundation, which is prohibited by state law from engaging in undisclosed lobbying, were used to benefit Pearson Education, a for-profit company… In New York, Pearson Education most recently won a five-year, $32 million contract to administer state tests, and it maintains a $1 million contract for testing services with the State Education Department, according to state records.”

This is the second time this year that the NYS Education Department has come under scrutiny for its large contracts.  A $27 million contract to Wireless Generation was voided because proper bidding procedures were not followed.

In the past couple of weeks, we have had some good news for New York City.  First, holiday gift buying is better than last year which has helped fuel a few blips up in the local economy.  Second, Cornell University will be developing a multi-billion dollar new school for science and engineering on Roosevelt Island.  Third, it was announced that New York City will reach  its longstanding goal of attracting 50 million tourists in a year.  Mayor Michael Bloomberg stated that the city is expected to surpass that total by the end of the year.  The 50 millionth tourist is expected sometime this week.

The city’s official tourism arm, NYC & Company, projects tourists will spend $32 billion in the city this year, helping to support about 320,000 jobs.

Congratulations to our Big Apple!!

Inside Education reported yesterday that M.I.T.  will begin offering certificates of achievement for its courses.   The article’s author  commented:

In the latest boon for the “open education” movement, the engineering mecca on Monday announced a new online learning initiative, called MITx, that will give anyone the opportunity to work through MIT course material and earn a certificate of achievement.

The university’s announcement (and accompanying FAQ) did not contain much in the way of specifics. It is not known what courses, or how many, will be available when MITx goes live in the spring. Still, for open-education advocates it was an optimistic coda to a year that also saw a promising experiment in “massive open online courses” at Stanford University and a cotillion for the smorgasbord of free tutorials and mastering software at Khan Academy.” 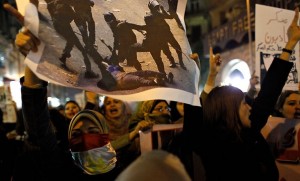 The New York Times is reporting that thousands of women marched in protest in Cairo last evening in an extraordinary expression of anger over images of soldiers beating, stripping and kicking female demonstrators in Tahrir Square.  They chanted “Freedom, Freedom” and “Drag me, strip me, my brothers’ blood will cover me!”

“Where is the field marshal?” they demanded of the top military officer, Field Marshal Mohamed Hussein Tantawi. “The girls of Egypt are here.”

The New York Times article state that “Historians called the event the biggest women’s demonstration in modern Egyptian history, the most significant since a 1919 march against British colonialism inaugurated women’s activism here, and a rarity in the Arab world. It also added a new and unexpected wave of protesters opposing the ruling military council’s efforts to retain power and its tactics for suppressing public discontent.”

Images of protesters being brutally attacked by military police in Cairo yesterday are all over the Internet.   One video (see below) of a young women being partially stripped, beaten by metal rods or sticks and stomped on is particularly brutal and cruel.   The protests and subsequent clashes are into their third day and  have left 10 people dead and hundreds injured. ­

David Brooks in reviewing the best magazine essays of 2011 refers to Malcolm Gladwell’s “devastating takedown of the U.S. News and World Report and other college and university rankings” that was published in The New Yorker in February.  Gladwell panned the U.S. News ranking system of colleges because it uses a uniform set of evaluation critieria to rank all colleges which is problematic given that the colleges are so different (i.e., mission, tuition, size, etc.)   To quote:

“The U.S. News rankings are run by Robert Morse, whose six-person team operates out of a small red brick office building in the Georgetown neighborhood of Washington, D.C. Morse is a middle-aged man with gray hair who looks like the prototypical Beltway wonk: rumpled, self-effacing, mildly preppy and sensibly shoed. His office is piled high with the statistical detritus of more than two decades of data collection. When he took on his current job, in the mid-nineteen-eighties, the college guide was little more than an item of service journalism tucked away inside U.S. News magazine. Now the weekly print magazine is defunct, but the rankings have taken on a life of their own. In the month that the 2011 rankings came out, the U.S. News Web site recorded more than ten million visitors. U.S. News has added rankings of graduate programs, law schools, business schools, medical schools, and hospitals—and Morse has become the dean of a burgeoning international rankings industry.”

How sad and a pity for the high school seniors [and their parents] who use the deeply flawed U.S. News’ rankings as they prepare for one of the more important decisions in their lives.

After Stanford University had withdrawn its bid, the Daily News is reporting that Cornell University has won the unprecedented competition to build a new science and engineering college in New York City.   The upstate Ivy League institution beat out six teams of universities to win the right to free land and $100 million in city subsidies to launch a top-flight applied sciences graduate school in the five boroughs.

Mayor Michael Bloomberg is supposed to make the announcement today at the Weill Cornell Medical College in Manhattan.  The article states that:

“Cornell, along with Stanford University, was considered an early front-runner. Both schools promised to build sweeping, state-of-the-art campuses on Roosevelt Island.

On Friday, Cornell appeared a near shoo-in after Stanford abruptly dropped out and Cornell revealed it received an anonymous $350 million gift toward the ambitious project.

Cornell, which is partnering with Israel’s prestigious Technion university, is expected to open a temporary program in 2012 at a site outside of Roosevelt Island, a source said.”

The New York Times is reporting that by age 23, almost a third of Americans have been arrested for a crime, according to a new study that researchers say is a measure of growing exposure to the criminal justice system in everyday life. The study, the first since the 1960s to look at the arrest histories of a national sample of adolescents and young adults over time, found that 30.2 percent of the 23-year-olds who participated reported having been arrested for an offense other than a minor traffic violation.

That figure is significantly higher than the 22 percent found in a 1965 study that examined the same issue using different methods. The increase may be a reflection of the justice system becoming more punitive and more aggressive in its reach during the last half-century, the researchers said. Arrests for drug-related offenses, for example, have become far more common, as have zero-tolerance policies in schools.

The study did not look at racial or regional differences, but other research has found higher arrest rates for black men and for youths living in poor urban areas.

“This estimate provides a real sense that the proportion of people who have criminal- history records is sizable and perhaps much larger than most people would expect,” said Shawn Bushway, a criminologist at the State University of New York at Albany and a co-author of the study, which appears in today’s issue of the journal Pediatrics.

This study begs the question:  What are we doing in this society to our youth?