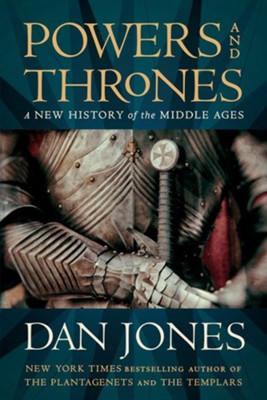 I just finished reading Powers and Thrones:  A New History of the Middle Ages by Dan Jones.  Jones is a bestselling author (Crusades, The Templars, The War of the Roses)  and a Fellow in the Royal Historical Society.  This book at 630 pages is a broad review of the thousand years between the fall of the western Roman Empire in the fifth century and the 1500s when the Protestant Reformation gave rise to deep changes in the cultural and social fabric of the Western World.  His last section (Part IV- Revolution (1347-1527) is riveting history.  In his closing paragraph, he likens 1500s Europe to our contemporary world  and “its changing  global climate, pandemic diseases, technological progress, a revolution in communication and publishing, mass migrations, and a reformation in cultural values.”

In sum, a  thoughtful read and I recommend it to anybody interested in this period.

Below is a review published in The New York Times.

POWERS AND THRONES
A New History of the Middle Ages

Those who write about medieval history often develop a keen awareness that the narrative is best told when it is made relatable to the modern reader. A skillful historian of the Middle Ages must find a way to compress the nebulous historical record into a concise and compelling story line that is both relevant and approachable. It’s a daunting endeavor. Fortunately, Dan Jones is up to the task.

In his latest book, “Powers and Thrones: A New History of the Middle Ages,” Jones recounts the key events and personalities that defined the millennium extending from the fall of the western Roman Empire to the dawn of the modern era. Jones is no stranger to this period. His previous books were popular histories that explored, among other subjects, Plantagenet England, the War of the Roses and the Crusades. But now his scope has expanded to include the entirety of the Middle Ages.

In “Powers and Thrones,” Jones presents a procession of kings, clerics, conquerors and artists, producing a lively history that often reads like a novel. But he enriches his narrative by carefully balancing the flow of personalities with historical anecdotes and era-defining events.

In order to anchor the diffuse story of the Middle Ages, Jones focuses on the medieval building blocks that have reached into our modern age like a museum curator shaping and forming an exhibit for a wide audience. He reduces his seemingly unending collection of stories, anecdotes, potential digressions and alluring tangents to their essentials, highlighting the common threads that run through history.

And so Rome is not merely an ancient and imposing military power; it is the source of Roman law, the modern Romance languages and the Christian faith that would come to dominate European society. The Germanic invasions of the crumbling empire are not merely the work of a barbarous horde; they are the process by which much of the political framework of western Europe is established. The Muslim conquest of the Arab world is not merely a counterweight to the spread of Christianity in Europe; it is the source of many of the religious fractures that plague both the East and West to this day. And the arrival of the Vikings does more than portend the plunder of monasteries and royal coffers; it provides the first European link to North America and shapes the future Anglo-French relationship through the creation of Normandy. Jones has a lot of ground to cover, but he has managed to touch every major topic. As each piece of the puzzle is placed into position, the modern world gradually comes into view.

Even his footnotes are designed to connect the story line to the contemporary world. Parallels are drawn between the role of regional identity in Charlemagne’s empire and the political divorce of Brexit. The extraterritorial reach and power of early monasteries are compared to the transnational scope of Amazon and Facebook. The story of the brilliant scholar Peter Abelard is presented as an early example of university “cancel culture.” These are notes meant to engage the reader and carry the major themes of the book forward.

While essentially chronological, “Powers and Thrones” is organized around a number of major themes that shaped and defined the era. Jones treats each as a distinct topic, examining its background and placing it within a larger context. As a result, the narrative sometimes skips around. For example, a discussion of knighthood spans nearly eight centuries, from the foundations of the institution to Henry VIII’s love of jousting. For those who prefer their history to adhere to a strict timeline, this topic-based approach can occasionally be frustrating. But it permits Jones to explore the issues that defined the Middle Ages and demonstrate how each development was a step in the evolution of Europe. It’s an approach that allows the reader to connect all the dots.

“Powers and Thrones” also reminds us why modern scholars cringe at any reference to the term “Dark Ages.” The idea that the early Middle Ages were an era of barbarism and ignorance is refuted by Jones’s vast array of evidence to the contrary. He illustrates the sophisticated culture of the Germanic tribes that produced the Carolingian Empire, the enduring legacy of the Roman Empire in Byzantium and the scholarly contributions of Muslim writers throughout the Mediterranean basin.

To be sure, “Powers and Thrones” is not without its limitations. The book retraces a lot of familiar ground covered by other scholars, and the reader should not expect a deep dive into the period’s military, linguistic, literary or legal history. But, in the end, “Powers and Thrones” does what a general history of the Middle Ages should do. It provides the reader with a framework for understanding a complicated subject, and it tells the story of an essential era of world history with skill and style.