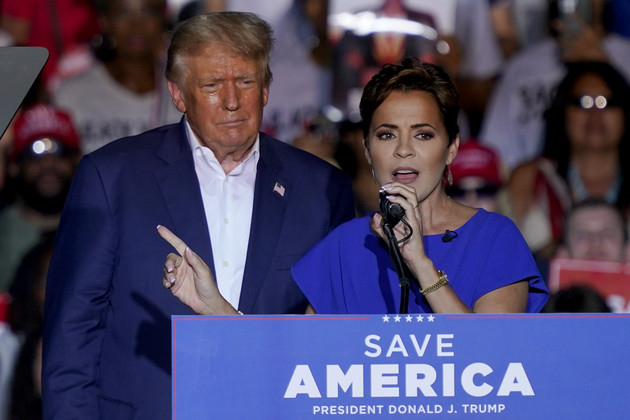 Republican Kari Lake lost her lawsuit when Judge Peter Thompson threw out  the challenge of her defeat in the Arizona governor’s race to Democrat Katie Hobbs, rejecting her claim that problems with ballot printers at some polling places on Election Day were the result of intentional misconduct.

In a decision issued Saturday, Maricopa County Superior Court Judge Thompson, who was appointed by then-Republican Gov. Jan Brewer, found that the court did not find clear and convincing evidence of the widespread misconduct that Lake had alleged had affected the result of the 2022 general election.  As reported by various news media.

Lake, who lost to Hobbs by just over 17,000 votes, was among the most vocal 2022 Republicans promoting former President Donald Trump’s election lies, which she made the centerpiece of her campaign. While most of the other election deniers around the country conceded after losing their races in November, Lake has not. Instead, she asked the judge to either declare her the winner or order a revote in Maricopa County.

Lawyers for Lake focused on problems with ballot printers at some polling places in Maricopa County, home to more than 60% of Arizona’s voters. The defective printers produced ballots that were too light to be read by the on-site tabulators at polling places. Lines backed up in some areas amid the confusion.

County officials say everyone had a chance to vote and all ballots were counted, since ballots affected by the printers were taken to more sophisticated counters at the elections department headquarters. They are in the process of investigating the root cause of the printer problems.

Lake’s attorneys also claimed the chain of custody for ballots was broken at an off-site facility, where a contractor scans mail ballots to prepare them for processing. They claim workers at the facility put their own mail ballots into the pile, rather than sending their ballots through normal channels, and also that paperwork documenting the transfer of ballots was missing. The county disputes the claim.

Lake faced extremely long odds in her challenge, needing to prove not only that misconduct occurred, but also that it was intended to deny her victory and did in fact result in the wrong woman being declared the winner.

Her attorneys pointed to a witness who examined ballots on behalf of her campaign and discovered 14 ballots that had 19-inch images of the ballot printed on 20-inch paper, meaning the ballots wouldn’t be read by a tabulator. The witness insisted someone changed those printer configurations, a claim disputed by elections officials.

County officials say the ballot images were slightly smaller as a result of a shrink-to-fit feature being selected on a printer by a tech employee who was looking for solutions to Election Day issues. They say about 1,200 ballots were affected by turning on the feature and that those ballots were duplicated so that they could be read by a tabulator. Ultimately, these ballots were counted, officials said.

A person who takes public-opinion polls testified on behalf of Lake, claiming technical problems at polling places had disenfranchised enough voters that it would have changed the outcome of the race in Lake’s favor. But an expert who was called to testify by election officials said there was no evidence to back up the pollster’s claim that 25,000 to 40,000 people who would normally have voted actually didn’t cast ballots as a result of Election Day problems.

Thompson had previously dismissed eight of the 10 claims Lake raised in her lawsuit. Among those were Lake’s allegation that Hobbs, in her capacity as secretary of state, and Maricopa County Recorder Stephen Richer engaged in censorship by flagging social media posts with election misinformation for possible removal by Twitter. He also dismissed her claims of discrimination against Republicans and that mail-in voting procedures are illegal.

Lake is another Trump loser!