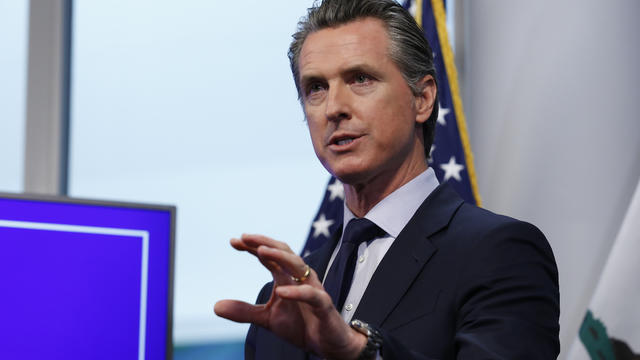 “They’re sowing the seeds, creating a culture and a climate like this,” Newsom told CBS News’ chief Washington correspondent, Major Garrett, referring to the conservative network. “I mean, look online. Look at the sewage that is online that they amplify on these networks and in social media to dehumanize people like Nancy Pelosi and other political leaders.”

The governor’s remarks come days after an intruder broke into the San Francisco house Pelosi shares with her husband, Paul, whom the intruder attacked with a hammer, causing a skull fracture and other injuries that required surgery.

“I’ve seen the dehumanization of Nancy Pelosi. I don’t think anyone’s been dehumanized like she has consistently,” Newsom said of his fellow California Democrat.

He specifically called out Fox News host Jesse Watters, who has done several segments about Paul Pelosi pleading guilty to a misdemeanor driving under the influence charge earlier this year.

“What he’s been saying about Paul Pelosi the last five, six months, mocking him consistently ― don’t tell me that’s not aiding and abetting all this. Of course it is,” Newsom said.

Watters downplayed the attack shortly after it happened, suggesting that the suspect, David Wayne DePape, should be released from custody.

“What I want is that I want this alleged perpetrator to be treated the exact same way if he had treated ― if he had attacked anybody else,” Watters said on his show. “Because a lot of people get hit with hammers. A lot of people get attacked. And a lot of the times they’re out on bail the next day and it’s a simple assault charge. So I don’t know why this guy is being treated differently.”

When law enforcement arrived at the Pelosis’ home during the attack, they found a roll of tape, rope, rubber and cloth gloves, two hammers and zip ties. DePape has been charged with one count of assault of an immediate family member of a U.S. official and one count of attempted kidnapping of a U.S. official. He faces a potential 50 years in prison.

DePape has “a long history of fringe conspiracy theory views,” California state Sen. Scott Wiener (D) said earlier this week, noting he became familiar with him and his pro-nudism activism while serving on the San Francisco Board of Supervisors. A blog that media investigations have uncovered shows several troubling posts written by someone named David DePape, including remarks questioning the results of the 2020 presidential election, supporting former President Donald Trump and propping up QAnon conspiracy theories.

Watters is a Tucker Carlson wannabe who will do or say anything for a ratings bump!