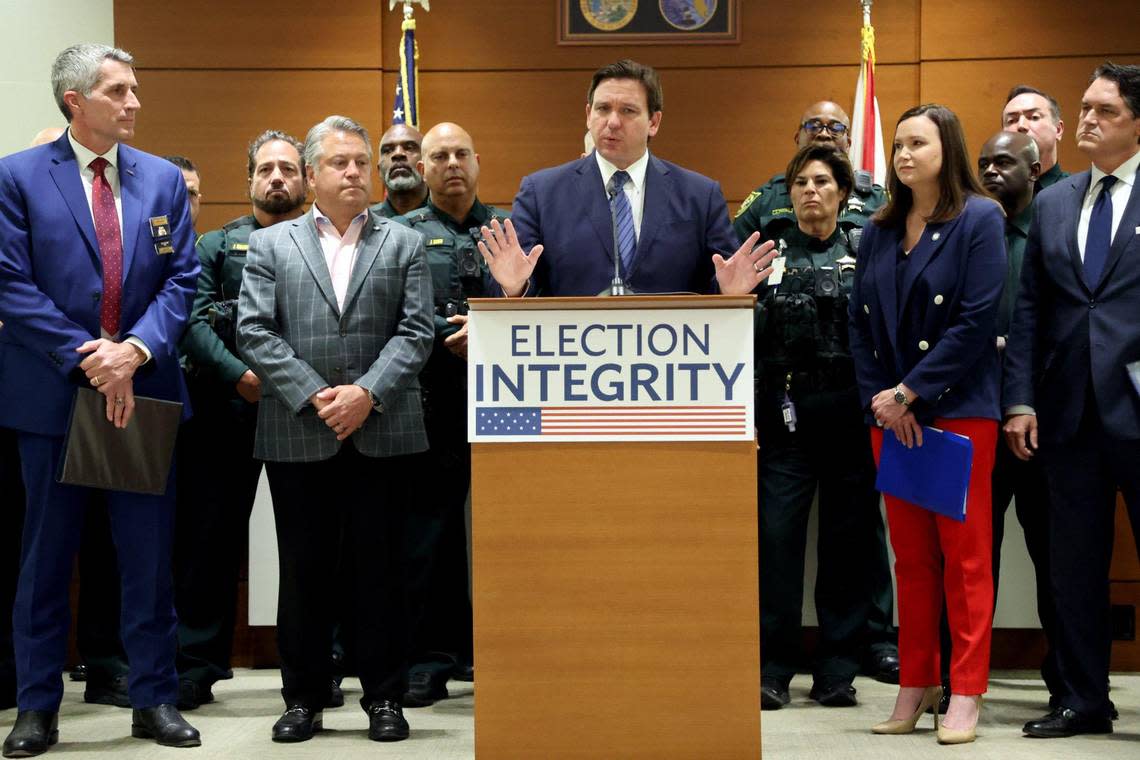 When police went to arrest Tony Patterson outside his Tampa home in August, he couldn’t believe the reason.

“What is wrong with this state, man?” Patterson protested as he was being escorted to a police car in handcuffs. “Voter fraud? Y’all said anybody with a felony could vote, man.”

Body-worn camera footage recorded by local police captured the confusion and outrage of Hillsborough County residents who found themselves in handcuffs for casting a ballot following investigations by Gov. Ron DeSantis’ new Office of Election Crimes and Security.

The Aug. 18 arrests — conducted hours before DeSantis called a news conference to tout his crackdown on alleged voter fraud — were carried out by state police officers accompanied by local law enforcement.

The never-before-seen footage, obtained by the Herald/Times through public records requests, offers a personal glimpse of the effects of DeSantis’ efforts to root out perceived voter fraud.

“They’re going to pay the price,” DeSantis said during the news conference announcing the arrests.

Of the 19 people arrested, 12 were registered as Democrats and at least 13 are Black, the Herald/Times found.

Romona Oliver, 55, was about to leave for work when police walked up her driveway at 6:52 a.m. and told her they had a warrant for her arrest.

An officer told her she was being arrested for fraud, a third-degree felony, for voting illegally in 2020.

Oliver and 19 others are facing up to five years in prison after being accused by DeSantis and state police of both registering, and voting, illegally.  As reported  by the Miami Herald.

They are accused of violating a state law that doesn’t allow people convicted of murder or felony sex offenses to automatically be able to vote after they complete their sentence. A 2018 state constitutional amendment that restored the right to vote to many felons excluded this group.

But, as the videos further support, the amendment and subsequent actions by state lawmakers caused mass confusion about who was eligible, and the state’s voter registration forms offer no clarity. They only require a potential voter to swear, under penalty of perjury, that they’re not a felon, or if they are, that their rights have been restored. The forms do not clarify that those with murder convictions don’t get automatic restoration of their rights.

Oliver, who served 18 years in prison on a second-degree murder charge, registered to vote at the Department of Highway Safety and Motor Vehicles on Feb. 14, 2020. Six months later, she updated her address and completed another registration form.

After brief eligibility checks by the Department of State — which reports to DeSantis and is responsible for cleaning the rolls of ineligible voters — she was given a voter ID card both times.

Oliver wasn’t removed from the rolls until March 30 this year, more than two years later.

A handcuffed Nathan Hart, 49, found a sympathetic ear when he explained how he ended up registering and voting illegally, according to the sheriff’s office recording.

As he stood handcuffed, he told officers that he signed up to vote at the encouragement of somebody at “the driver’s license place.” Records show it was in March 2020.

Hart’s probation had ended a month earlier, Hart recalled. The person told him to sign up anyway.

“Then there’s your defense,” one of the officers replied. “You know what I’m saying? That sounds like a loophole to me.”

The officer was correct in one way: State law says that a voter has to “willfully” commit the crime — a hurdle that has forced some prosecutors not to charge ineligible voters.

In Lake County this year, for example, prosecutors declined to bring charges against six convicted sex offenders who voted in 2020.

“In all of the instances where sex offenders voted, each appear to have been encouraged to vote by various mailings and misinformation,” prosecutor Jonathan Olson wrote. “Each were given voter registration cards which would lead one to believe they could legally vote in the election. The evidence fails to show willful actions on a part of these individuals.”

DeSantis’ voter fraud arrests are being carried out by the Office of Statewide Prosecution, which is restricted by law to prosecuting crimes, including voting, involving two or more judicial circuits. Those crimes are usually “complex, often large scale, organized criminal activity,” according to its website. The statewide prosecutor is Nicholas Cox, who was reappointed by Attorney General Ashley Moody in 2019.

Oliver’s lawyer, Tampa attorney Mark Rankin, said he thinks DeSantis’ election security force chose these 20 in particular because the public would not have sympathy for people who were convicted of murder or sexual offenses. During a news conference announcing the arrests, DeSantis noted their criminal records.

“That’s not an accident,” Rankin said. “That’s a political strategy.”

Patterson, a registered sex offender, wondered why he was being singled out when officers showed up at his home, the recording shows.

“This happened years ago,” he told officers. “Why now? Why me?”

Even the Tampa police officer driving Patterson to the jail seemed surprised by the charges against him. En route, the officer received a phone call and appeared to briefly discuss Patterson’s case.

“I’ve never seen these charges before in my entire life,” the officer said.

Handcuffed in the back seat, Patterson, 40, stewed. He said his brother encouraged him to register to vote.

“I always listen to everybody else. Vote for this. Vote for — come on, man,” Patterson grumbled. “I thought felons were able to vote. That’s why I signed a petition form, that’s what I remember.

“Why would you let me vote if I wasn’t able to vote?”

What a horrible way to treat people!