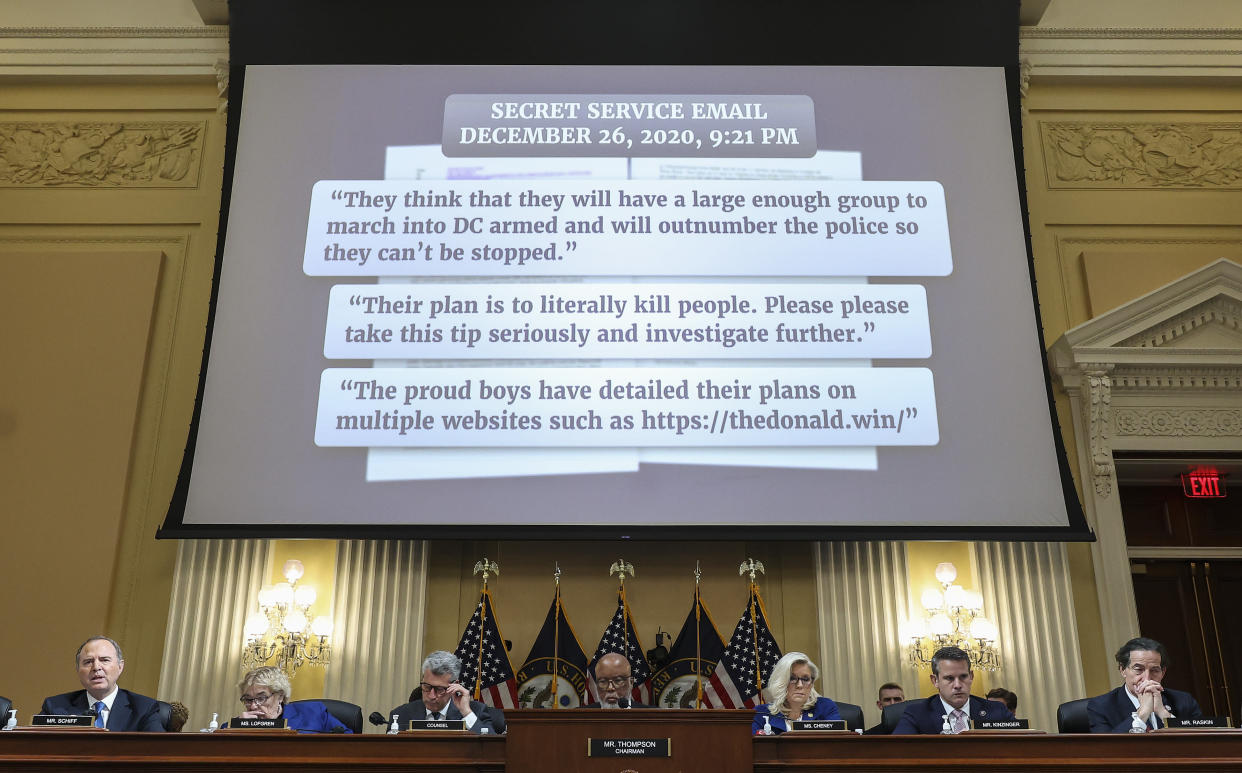 Excerpts of Secret Service emails are displayed during a hearing by the House’s Jan. 6 select committee on Oct. 13 in Washington. (Alex Wong)

The House select committee investigating Jan. 6 yesterday made its most explicit argument yet that former President Donald Trump was personally responsible for the violent insurrection that took place at the U.S. Capitol last year.

“The vast weight of evidence presented so far has shown us that the central cause of Jan. 6 was one man, Donald Trump, who many others followed,” the committee’s vice chair, Rep. Liz Cheney, R-Wyo., said during her opening remarks. “None of this would have happened without him. He was personally and substantially involved in all of it.”

Over the course of roughly two and a half hours, Cheney and the other eight members of the select committee each took turns presenting a combination of new and previously disclosed evidence that, they said, offered insight into Trump’s state of mind and motivations as he fought to overturn the results of the 2020 election and prevent the peaceful transfer of power.

Here are some of the key takeaways from yesterday’s hearing courtesy of several news media sources.

Among the new pieces of evidence presented on Thursday were a variety of revelations from the nearly 1 million pages of emails, recordings and other records the committee has obtained from the Secret Service in the months since its last public hearing.

Rep. Adam Schiff, D-Calif., said that while the committee is still reviewing those records, he presented a “sample of the new and relevant evidence,” including intelligence reports and other communications showing that the Secret Service and others within the White House were aware well in advance of Jan. 6, 2021, of the potential for violence specifically directed at the Capitol.

Examples of this evidence that were shown at the hearing included emailed intelligence alerts the Secret Service received as early as Dec. 24, 2020, about posts on pro-Trump internet forums like TheDonald.win and others, in which users discussed “targeting members of Congress” on Jan. 6.

In another particularly alarming report on Dec. 26, the Secret Service field office relayed a tip that had been received by the FBI, in which a source warned of a plan by the violent extremist group the Proud Boys to march armed into D.C. on Jan. 6. The source said the group, who’d detailed their plans on multiple websites including TheDonald.win, believed they would have enough people “to outnumber the police so they can’t be stopped.”

“Their plan is to literally kill people,” the source told the FBI, according to the report shown by the committee. “Please, please take this tip seriously and investigate further.”

Several members of the Proud Boys have since been charged in connection with the violent insurrection, including a number of the group’s leaders who now face charges of seditious conspiracy.

“By the morning of Jan. 6, it was clear that the Secret Service anticipated violence,” Schiff said.

Never-before-seen footage of congressional leaders springing into action on Jan. 6

The committee also showed never-before-seen video footage of both Republican and Democratic congressional leaders on Jan. 6, actively working to stop the riot and secure the Capitol complex so that they could resume the vote certification.

“We’ve got to … finish the proceedings or else they will have complete victory,” House Speaker Nancy Pelosi, a Democrat, is heard saying in one of the clips, as she and others are ushered to a secure location.

Spliced together with footage of rioters smashing through windows, storming the Capitol Rotunda and demanding to know where “she” is, Pelosi — along with Senate Majority Leader Chuck Schumer, House Majority Leader Steny Hoyer, as well as Republican leaders such as Senate Minority Leader Mitch McConnell and Minority Whip John Thune — is seen calmly making calls to request help from a variety of officials, including acting Secretary of Defense Chris Miller, then-Virginia Gov. Ralph Northam and Vice President Mike Pence.

The bipartisan cooperation shown in this new footage stood in stark contrast not only to the scenes of violence taking place in other parts of the Capitol, but also to the hours of apparent inaction inside the White House during this time while, according to many witnesses, the president was watching the violence play out on TV.

In previous hearings, the select committee has repeatedly sought to counter Trump’s claims that he believed he was the rightful winner of the 2020 election by presenting a variety of evidence showing that the former president was, in fact, aware that he’d lost to Joe Biden.

But on Thursday the panel also offered new evidence that Trump actually admitted privately that he’d been defeated and that Biden would soon become president, even as he was publicly claiming the exact opposite.

In videotaped testimony to the committee, a number of former Trump administration officials, including Gen. Mark Milley, who has served as chairman of the Joint Chiefs of Staff under Trump and Biden, former White House communications director Alyssa Farah Griffin, and Cassidy Hutchinson, an aide to then-White House chief of staff Mark Meadows, all described conversations in which they heard Trump acknowledge that he lost.

As further proof that Trump was privately preparing to depart the Oval Office while publicly fighting to cling to power, Rep. Adam Kinzinger, R-Ill., presented taped testimony from Milley and other officials including Douglas Macgregor, then the senior adviser to the acting secretary of defense, and former national security adviser Keith Kellogg, who said that in the wake of his 2020 election loss, Trump ordered the immediate withdrawal of U.S. troops from Somalia and Afghanistan.

Pentagon officials never followed through on the directive, which Kellogg said “would’ve been catastrophic” and a “tremendous disservice to the nation.”

The committee voted to subpoena Trump

At the conclusion of Thursday’s hearing, the select committee members voted unanimously to issue a subpoena requesting testimony and documents from Trump himself.

Acknowledging the move as a “serious and extraordinary action,” the committee’s chairman, Rep. Bennie Thompson, D-Miss., said, “This is a question about accountability to the American people. He must be accountable. He is required to answer for his actions. He’s required to answer to those police officers who put their lives and bodies on the line to defend our democracy.”

Cheney, who introduced the motion to subpoena Trump, said that more than a year after the panel began its investigation, one of its final remaining tasks was to “seek the testimony, under oath, from Jan. 6’s central player.”

According to NBC News, the panel is planning to issue its subpoena to the former president in the coming days, but the chances that Trump will cooperate are slim, and the subpoena will only remain in effect until the end of the current congressional term.

In the meantime, the committee has said it is continuing to review evidence and plans to produce a comprehensive report on its findings, along with legislative proposals to prevent a future insurrection attempt — though it has not said when, exactly, it expects that report to be released.

While leaving the door open for the possibility of such referrals, Cheney added that the committee’s members “recognize that our role is not to make decisions regarding prosecution.”

I watched the entire hearing and thought parts of it especially video of Nancy Pelosi and other members of Congress trying to quell the insurrection riveting.