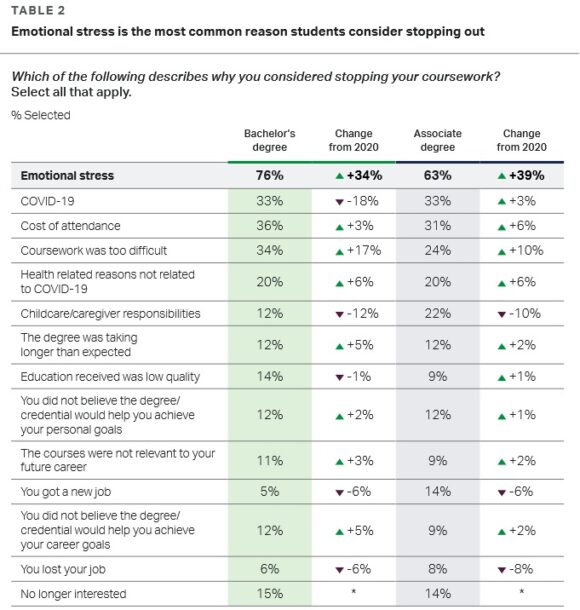 Mental health is emerging as one of the top reasons many college students are considering dropping out of college, according to a recently released report by Gallup and the Lumina Foundation..

Earlier this week, U.S. Surgeon General Vivek H. Murthy urged college administrators at a mental-health round-table, hosted by the American Council on Education, in Washington, D.C., to hire more counselors and establish programs where students can help each other cope with mental-health struggles. He also stressed the importance of collecting data to see which students on campus are using mental-health resources.

One of the goals of the round-table was to destigmatize talking openly about anxiety, depression, and other mental issues and to get political leaders to spend more money on colleges’ efforts to provide students with counseling services.  As reported by The Chronicle of Higher Education.

“We have this really powerful and unique window of opportunity right now to talk to the country about mental health, and to actually take action on mental health, in a way that we haven’t had in the last few decades,” Murthy said.

In addition to Murthy, the event’s speakers included Ted Mitchell, president of ACE; Hollie M. Chessman, director of research at the council; Jamie Merisotis, president and chief executive of Lumina; and Zainab Okolo, a strategy officer at Lumina.

Students struggled with mental health before the pandemic, but those problems escalated after they spent almost a year in isolation and away from the typical supports universities can provide. Now, many of those students are seriously considering dropping out of college because they can’t handle the stress and anxiety, mental-health advocates say. More than 1.3 million students have dropped out of college since the beginning of the pandemic.

More than three-quarters of bachelor’s degree students who have considered dropping out in the past six months cite emotional stress as the reason (see Table above), according to the Gallup-Lumina report released in April. That’s a 34-percent increase from its previous report in 2020.

We tend to fund things in crisis mode, as opposed to providing the sustained funding that we need.

At the beginning of 2021, three-fourths of students in bachelor’s programs and two-thirds of adults seeking associate degrees had considered taking a break from college due to emotional stress, according to the report.

College affordability was the other factor driving students to drop out, the Gallup-Lumina report said.

In May, the U.S. Department of Education strongly encouraged colleges to use their money from the Higher Education Emergency Relief Fund to support student, faculty, and staff mental health. The department also extended the length of time colleges have to spend the emergency-relief grants to June 30, 2023.

While colleges have been able to use some of that funding to bolster counseling services for students, Murthy said that a one-time infusion of funds is not sustainable.

“We tend to fund things in crisis mode, as opposed to providing the sustained funding that we need,” he said. “Periodic injections of support are important, but we’ve got to continue that investment long term.”

Murthy also discussed the lingering effects of trauma, from physical to emotional abuse, and how that can show up in the classroom.

“You might be sitting next to somebody in chemistry class who looks like they come from a similar background as you, but they may have gone through some serious experiences in the past,” he said. “That may affect how they interact with you.”

He also asked the faculty members and student-service advocates in attendance to make sure that they’re taking care of themselves while supporting students.

“My guess is that many people in this room have sacrificed so much for the communities you’re seeking to serve that it may have even come at a personal cost,” Murthy said.

Many college students don’t find out that they have a mental-health condition until they’re diagnosed in college and have access to counseling services for the first time.

Bipolar disorder, anxiety, and depression are the top three mental illnesses that students are diagnosed with in college, says Okolo, who has been a therapist for 12 years.

Identifying that they have a mental illness and finding help can be difficult, she said.

She stressed the significance of insuring that counseling centers are diverse, culturally sensitive, and bilingual.

“We must acknowledge that if we’re having students come on our campus to engage and stretch their minds, that anything to do with the mind, and anything that’s challenging them, must be something that we prioritize,” Okolo said.

Important advice was given at this roundtable.!