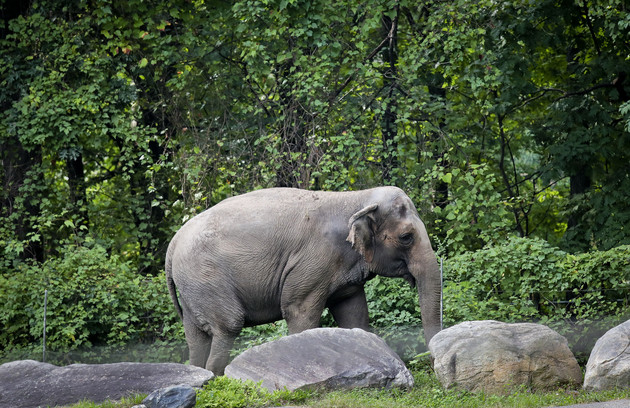 Happy the elephant will remain in the Bronx Zoo after New York’s highest court ruled in a divided decision on Tuesday that she isn’t entitled to legal personhood and a right to bodily liberty.

Happy is an “extraordinarily intelligent and autonomous being who possesses advanced analytic abilities akin to human beings,” the group told New York Court of Appeals, and she has been living on a “solitary and lonely Bronx Zoo acre for more than four decades.”

The writ of habeas corpus “is intended to protect the liberty right of human beings to be free of unlawful confinement,” the court said, so “it has no applicability to Happy, a nonhuman animal who is not a ‘person’ subjected to illegal detention.”

“Thus, while no one disputes that elephants are intelligent beings deserving of proper care and compassion, the courts below properly granted the motion to dismiss the petition for a writ of habeas corpus, and we therefore affirm,” Chief Judge Janet DiFiore wrote for the 5-2 majority.

“It is an affront to a civilized society, and every day she remains a captive — a spectacle for humans — we, too, are diminished,” Rivera wrote.

The trial court said precedent bound it to a finding that nonhuman animals are not persons because “they cannot bear duties, they are not human, and according rights to nonhuman animals is an issue better left to the legislature.”

But “personhood is not synonymous with being human,” the group argued, and it doesn’t “require the capacity to bear duties.”

The group received backing from a group of 27 law professors who told the court that “many legal persons lack legal duties.”

The Bronx Zoo and Wildlife Conservation Society told the court that Happy is well cared for, and that the Nonhuman Rights Project is using Happy to “impose its own world view that certain, or perhaps all animals should not be cared for in zoos.”

Whether habeas corpus applies to nonhuman animals is an issue “that merits careful consideration of all concerns by the elected officials of the state,” the zoo and society argued.

The Association of Zoos & Aquariums and individual zoos wrote in support that expanding habeas relief to animals “would have extraordinarily deleterious effects.” The writ could be used not only against zoos and aquariums in the state, but also against “any pet owner, beekeeper, dairy farmer, or myriad others,” according to the filing.

The writ “protects the right to liberty of humans because they are humans with certain fundamental liberty rights recognized by law,” according to the chief judge. She was joined by Judges Michael J. Garcia, Madeline Singas, Anthony Cannataro, and Shirley Troutman.

Wilson wrote that he does not “place nonhuman animals like Happy on equal footing with humans.” But if courts recognize that corporations can have constitutional rights, then the law can recognize “an autonomous animal’s right to judicial consideration of their claim to be released from an unjust captivity.”

The Nonhuman Rights Project said in a statement Tuesday that the majority “appears to be out of touch with the times and has demonstrated a deep misunderstanding of what Happy’s case is about.”

The group will continue its campaign for her release while it considers its legal options and next steps, it said. The dissents and the fact that the court considered the case gives “tremendous hope for a future where elephants no longer suffer as Happy has and where nonhuman rights are protected alongside human rights,” the group said.

Too bad for Happy.  At least she has an acre of land to walk about and is not confined to a small pen or cage.