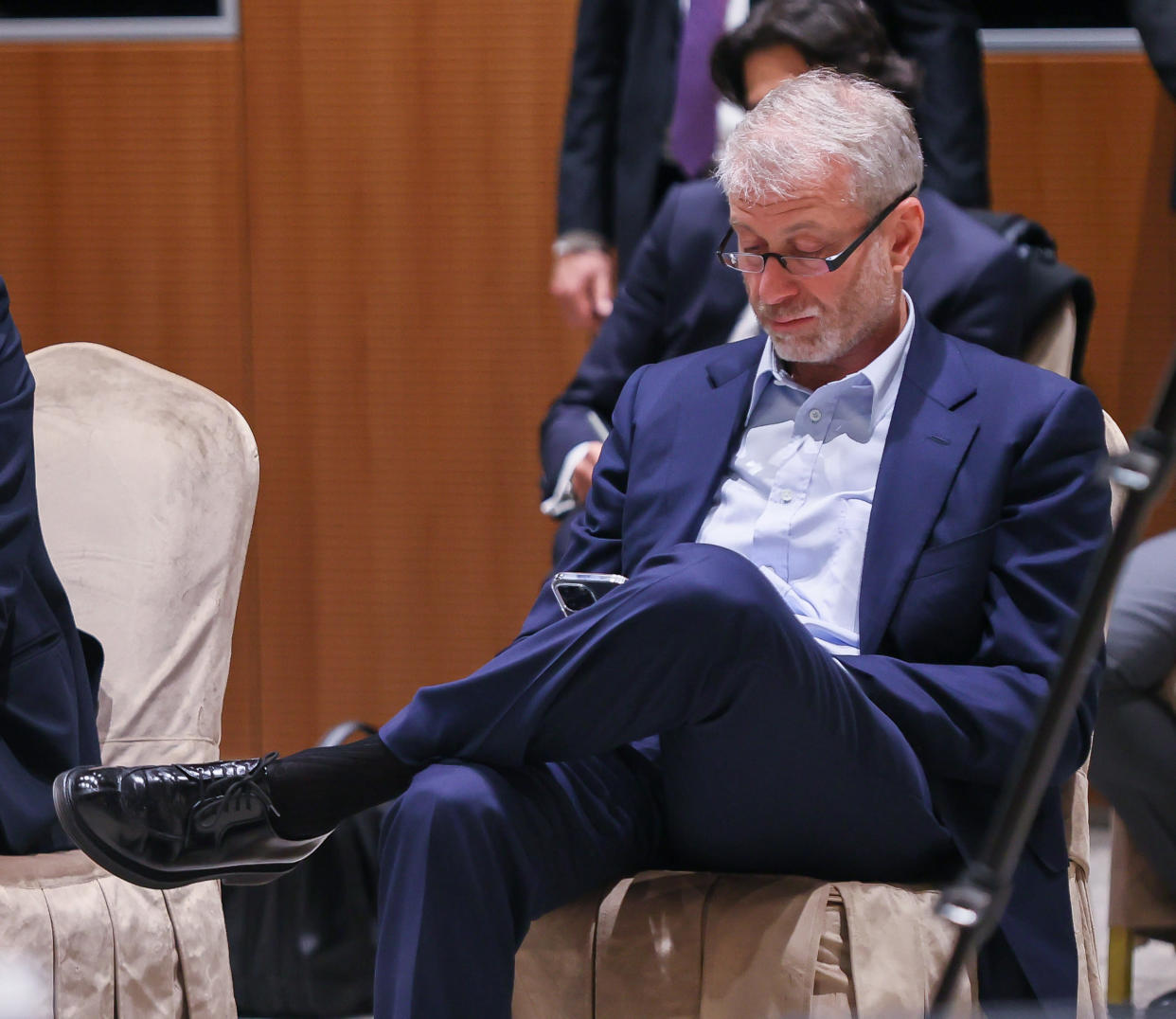 Roman Abramovich at the peace talks between delegations from Russia and Ukraine in Istanbul on Tuesday. (Cem Ozdel/Anadolu Agency via Getty Images)

Since the beginning of the Ukraine War, there has been a lot of reporting on Russian oligarchs especially those who have been the objects of sanctions on the part of the United States and the European Union. They are not often mentioned by name and it is difficult to know exactly who they are other than they  have served in various official and non-official advisory positions to Vladimir Putin.  Reuters and Yahoo News have put together an article describing one of these oligarchs, Roman Abramovich, who has been close to Putin and may be serving as an important link in peace negotiations. He has been thrust into the spotlight over the past few weeks following the British government’s March 10 announcement of sanctions against him over his close ties to the Kremlin. Abramovich’s British assets were frozen, which led the Premier League board to disqualify him as a director of the Chelsea Football Club.

Last Monday, the Wall Street Journal reported that Abramovich and others had suffered symptoms of suspected poisoning after attending peace talks between Ukraine and Russia in Kyiv on March 3. It is not clear who may have conducted the alleged attack. The Journal reported that “people familiar with the matter blamed the suspected attack on hard-liners in Moscow who they said wanted to sabotage talks to end the war.”

But who is this Abramovich and what is his story. Below is an excerpt from the Reuters/Yahoo News article. I found it very illuminating

Who is Roman Abramovich?

Abramovich, 55, is an entrepreneur and former politician who made billions of dollars in 2005 after selling his majority stake in a Russian oil firm to the government, from which he had bought it a decade earlier at a much lower price. After losing both parents by the age of 3, Abramovich was raised by relatives in the northern Russian region of Komi. He left school at 16 and served in the Red Army before selling toys in Russia’s capital, Moscow.

In his late 20s, Abramovich came into good fortune following the fall of the Soviet Union. According to the BBC, he seized the oil company Sibneft from the Russian government in a rigged auction in 1995. He won the bid for around $250 million and sold it back to the state-owned fossil fuel company Gazprom for $13 billion. Abramovich’s lawyers stated that there was no basis for alleging he amassed his wealth through criminality. But the BBC notes that “in 2012, he admitted in a UK court that he had made corrupt payments to help get the Sibneft deal going.”

Abramovich came to meet Putin through former Russian President Boris Yeltsin, who Abramovich became friendly with in the 1990s. Following Yeltsin’s resignation in 1999, Abramovich was reportedly among those who wanted Putin as the next president. His career in politics moved hand in hand with Putin, and in 2000 Abramovich was elected as governor of Chukotka, a remote region in Russia’s northeast. According to Forbes, Abramovich spent $2.5 billion of government money in the region, gaining popularity through improving social services. He stepped down from his position eight years later.

How rich is he?

Abramovich’s net worth peaked at $23.5 billion in 2018. According to Forbes, he now owns stakes in steel giant Evraz and Norilsk Nickel, and holds the vast majority of the Premier League Chelsea FC soccer team. Abramovich reportedly owns the world’s second-largest yacht, which he bought for $400 million in 2010. The Antiguan government confirmed on Friday to the Financial Times that two yachts moored in the Caribbean nation are owned by Abramovich.

What about the recent sanctions?

The Russian billionaire was sanctioned by the British government last month as part of the West’s response to Putin’s invasion of Ukraine on Feb. 24. Despite Abramovich’s attempts to distance himself legally from Putin, the British government still claimed that Abramovich obtained “a financial benefit or other material benefit from Putin and the government of Russia.” Sanctions stopped Abramovich’s football club from selling any more game tickets and merchandise. The club has also been banned from buying or selling players on the transfer market. A week into the war, Abramovich said he had made the “difficult decision” to sell the club; however, after his assets were frozen, the sale was stalled.

What are his international connections?

Abramovich is Jewish, and in 2018 he was granted Israeli citizenship. An Israeli government spokesperson told a local television station at the time: “Roman Abramovich arrived at the Israeli Embassy in Moscow like any other person. He filed a request to receive an immigration permit, his documents were checked according to the law of return, and he was indeed found eligible.” Before Washington imposed sanctions against Abramovich, several influential figures in Israel asked the U.S. ambassador not to sanction him. Their letter was sent to Tom Nides, the U.S. ambassador to Israel, on Feb. 6, weeks before Russia’s invasion of Ukraine.

Last year the tycoon became an EU citizen after securing Portuguese citizenship. His successful application used a Portuguese law that offered naturalization to descendants of Sephardic Jews who were expelled during the Inquisition in the 15th century. Through his philanthropy, Abramovich has given half a billion dollars to charities in Israel over the past two decades, the Jerusalem Post reported.

On Feb. 22 Yad Vashem, the World Holocaust Remembrance Center in Jerusalem, announced “a new long-term strategic partnership” with Abramovich, which included a donation of several million dollars from the Russian businessman. On March 10, Yad Vashem said it was “suspending the partnership.”

Abramovich at the Western Wall in Jerusalem in 2006. (Orel Cohn/AFP via Getty Images)

What role is he playing in peace negotiations?

Officials from both Ukraine and Russia have said that Abramovich is not an official member of their delegation, and he wasn’t seated at the main negotiating table during the peace talks. According to the Wall Street Journal, Ukrainian President Volodymyr Zelensky asked President Biden to hold off on sanctioning the oligarch as he could be used as a go-between in peace talks. Shortly after the war broke out, a spokesperson for Abramovich revealed that the billionaire had been contacted by Ukrainian officials “in support of achieving a peaceful resolution.” His spokesperson added that he has been “trying to help ever since.”

“As far as I am aware, he [Abramovich] was helping with the humanitarian issue: with the humanitarian convoy taking people out of Mariupol,” Zelensky told reporters on Sunday. Abramovich has been traveling between Ukraine, Israel, Belarus, Russia and Turkey to engage in negotiations. However, it remains unclear what his personal motives are.

According to the investigative journalism outlet Bellingcat and the Wall Street Journal, Abramovich and other members of the delegation who attended peace negotiations in Kyiv in early March suffered symptoms that were consistent with poisoning. The three men complained of red, teary eyes and peeling skin, a source told Sky News. However, a U.S. official told Reuters the intelligence “highly suggests” that the symptoms were caused by environmental factors. Kremlin spokesman Dmitry Peskov said the reports of the suspected poisoning of Abramovich are untrue and have “nothing to do with reality.