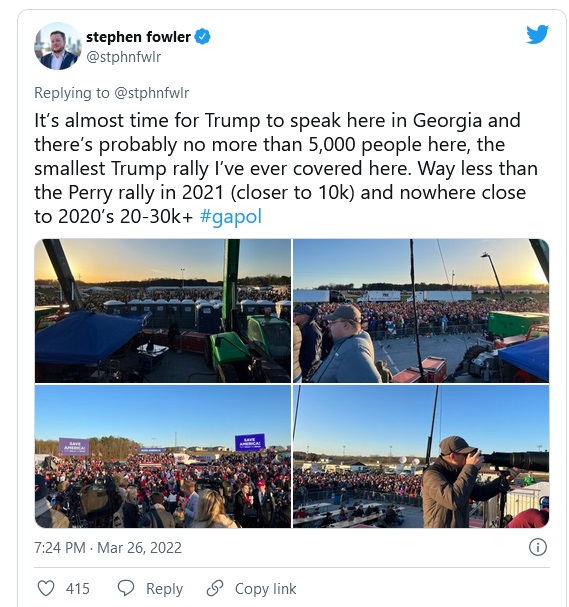 Reporters said the size of the crowd at the Trump rally on Saturday night in Commerce, Georgia, was underwhelming to say the least as the former president showed his support for several Republican primary candidates in the state.

“I’ve covered more than two dozen Trump rallies around the nation,” tweeted Greg Bluestein, a political reporter at the Atlanta Journal-Constitution. “This is the smallest crowd I’ve seen at a rally of his in Georgia since he won the 2016 election — significantly smaller than the crowd in Perry [Georgia last] September.”

Stephen Fowler, a political reporter for Georgia Public Broadcasting, made a similar observation.

“It’s almost time for Trump to speak here in Georgia and there’s probably no more than 5,000 people here, the smallest Trump rally I’ve ever covered here. Way less than the Perry rally in 2021 (closer to 10k),” Fowler noted Saturday in a tweet that included photos.

Fowler wrote a story about the rally under a headline saying Trump’s “revenge tour faltered.”

Trump spokesperson Liz Harrington told Newsweek that Fowler’s crowd estimate was “totally false,” and claimed “official estimates are between 25,000 and 35,000 people.” It wasn’t immediately clear what “official” crowd estimates she was referring to, as there didn’t appear to be any from the city of Commerce or its police department.

Bluestein said he didn’t believe Harrington’s numbers could be correct, and pointed to an earlier tweet showing how sparse the crowd was shortly after Trump claimed there were people “as far as the eye can see.”

Fowler noted the weather was cold and windy, and said that likely didn’t help attendance.

Fowler tweeted that the turnout “matches what I’ve seen at GOP events across the state.”

Trump has a long history of exaggeration and self-aggrandizement — and using crowd size as a measure of his popularity.

“For Donald Trump and his supporters, crowd size is more than just a bragging point. It’s proof that they are part of the American majority,” Elaine Godfrey wrote in The Atlantic in January.

It appears Trump gave a party and hardly anyone came!