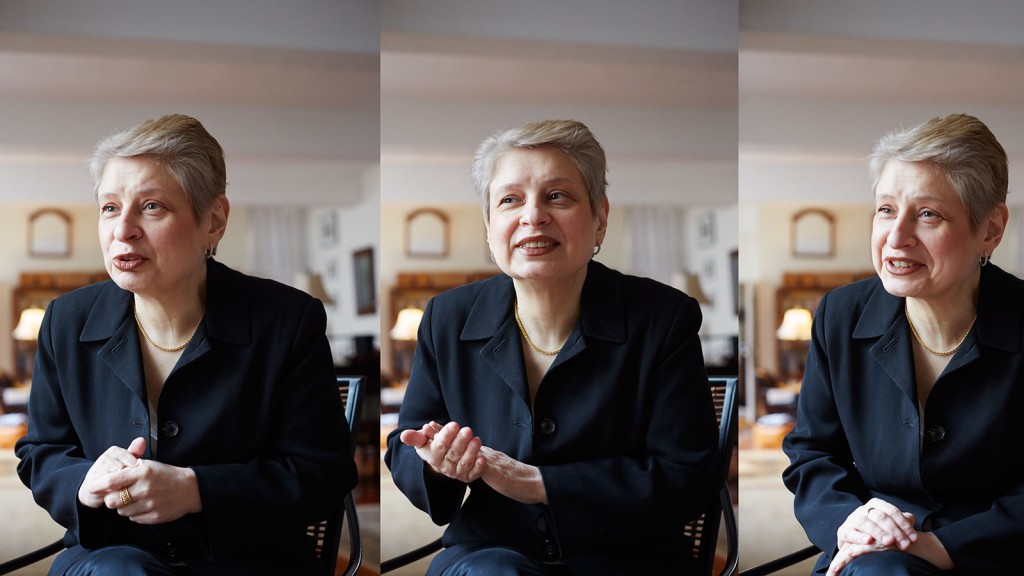 “Russia is done,”  Nina Khrushcheva said in an interview with Yahoo News, whose grandfather was Soviet leader Nikita Khrushchev, an ethnic Russian whose rise through the communist ranks mostly took place in Ukraine.  Khrushcheva is a Professor of International Affairs in the graduate program at The New School in New York City and  director of the Russia Project at the World Policy Institute.

It was Nikita Khrushchev, the First Secretary of the Communist Party of the Soviet Union from 1953 to 1964, who returned Crimea to Ukraine in 1954 as a Soviet administrative region, putting in motion the geopolitical shifts that would, much later, result in war.

Six decades later — in 2014 — Putin first invaded Ukraine to recover Crimea, as well as two eastern territories home to many ethnic Russians. When he launched a full-scale invasion last month, he blamed his Soviet predecessors for making mistakes he said it was now his duty to correct.

Few outside the Kremlin see it that way. “Russia is hated by the rest of the world,” Khrushcheva said, predicting a period of deepening international isolation. “Russia is the global enemy. That doesn’t end quickly,” she said, pessimistically envisioning “another 100 years of us being villains of the universe.” On Friday, President Biden announced that the United States, the European Union, Canada and Asia were all revoking Russia’s status as a favored trading partner, a move that comes on top of several rounds of sanctions and an exodus by Western corporations like McDonald’s.

Though it is not clear how long the sanctions will last, “it’s pretty clear that Russia will become poorer and more technologically backward. The choices for its citizens will be radically diminished and for many, many years to come,” Edward Alden of the Council on Foreign Relations told The Hill.

Moscow will certainly look to Beijing in response, and while China has avoided joining the chorus of condemnation directed at Russia, its own vast ambitions could leave Putin indebted to a dangerous degree.

What is already clear, however, is that three decades of hoping that Russia would emerge from the Cold War, like Germany, as a full-fledged modern democracy have been decisively dashed. The departure of McDonald’s, which opened on Red Square in 1990 to surging fascination, was a poignant symbol of disappointment in how little has changed since communism’s collapse.

The initial sanctions were not a surprise to the Kremlin, which almost welcomed them with a show of defiance. Nor, so far, have they served as a deterrent. In Putin’s own speeches and writings — including a remarkably frank English-language essay two years ago in the National Interest, an American publication — he discusses history in geopolitical terms, and he may be willing to countenance collective suffering to achieve his vision of a restored Russian empire that encompasses Ukraine and perhaps other ex-Soviet states. But achieving that vision has already caused widespread suffering for Russians and Ukrainians alike, leading to the kind of near-universal condemnation that is rare in a world of complex and competing national interests.

“Vladimir Putin is isolated and morally dead,” the lead editorial in a recent issue of the Economist thundered, with the magazine comparing him to Joseph Stalin, the brutal Soviet dictator whose image Putin has assiduously worked to rehabilitate.

Khrushcheva thinks such comparisons are unfair — to Stalin. “Even Stalin had an idea,” she said, adding that she has no sympathy for the ruthless Soviet despot who sent millions of his citizens to death and prison. The point of the comparison, rather, is to underscore Putin’s failure to articulate a reason for invading Ukraine, a nation that does share many cultural and historical ties with Russia but has been sovereign since 1991.

She deemed Putin’s vision of a “pan-Slavic state” encompassing Russia, Ukraine and Belarus as “beyond backward-looking,” not to mention out of touch with a Russian populace whose appetite for war he may have misjudged.

Still, war is being waged in the Russian name. And the longer it continues, the more dangerous Putin arguably becomes. Projecting strength is a key feature of his foreign policy — and has been for decades. “You must hit first, and hit so hard that your opponent will not rise to his feet,” he told Russian interviewers in 2000 about the second war he launched against Chechnya. The conflict reduced the breakaway republic to rubble, leaving little but grief and destruction in the wake of the Russian army.

Similar fears are mounting with Russian troops approaching Kyiv, though Putin may not be willing to outright destroy the historically significant city. Failing to seize the Ukrainian capital, however, would be tantamount to defeat. “I don’t think Russia has a ‘best outcome,'” Khrushcheva believes. “Russia doesn’t have a good solution — at all.”

An outcome short of clear victory could prove personally devastating for Putin, who has wielded his power virtually unchallenged for two decades. So far, attempts at a negotiated peace have failed while confusion over the path ahead — on both diplomatic and military fronts — appears to be deepening.

The political scientist Francis Fukuyama believes that a Ukrainian resistance bolstered by the West will ultimately prevail against a Russian military that has the advantage of size but suffers from poor leadership and low morale. The war will end in an “outright defeat” for Russia, Fukuyama argued in a recent blog post, and the subsequent collapse of Putin’s regime: “He gets support because he is perceived to be a strongman; what does he have to offer once he demonstrates incompetence and is stripped of his coercive power?”

Khrushcheva thinks that even if Putin is replaced as president, the kleptocratic power structure he created will remain, simply allowing a successor to take over without making reforms, the way Dmitry Medvedev did when he became president in 2008. (Putin could not serve a third term at that time because of term limits; he has since changed that law, assuring his own rule into near perpetuity.)

“The system is not going anywhere,” Khrushcheva told Yahoo News. And she finds discussion of a post-Putin Russia far too premature. “His popularity is rising,” she said. Though polling can be inaccurate in Russia, his approval rating last month was above 70 percent. “People will rally around the flag,” Khrushcheva predicted. And she did not have in mind the banners of Ukrainian yellow and blue that have become commonplace in many Western cities.

When he invaded Ukraine, Vladimir Putin almost certainly expected a quick, decisive conquest that would restore the Kremlin’s influence in Eastern Europe and burnish his own status as a Russian leader on par with Peter and Catherine the Great.

Weeks later, Russia is a hobbled pariah, while the dogged Ukrainian resistance — led by charismatic President Volodymyr Zelensky — has attained admiration in much of the world.

There is little doubt that the Russian army has the firepower to level its smaller neighbor if it chooses to. But the costs to Russian society could be enormous for years, even generations, to come.