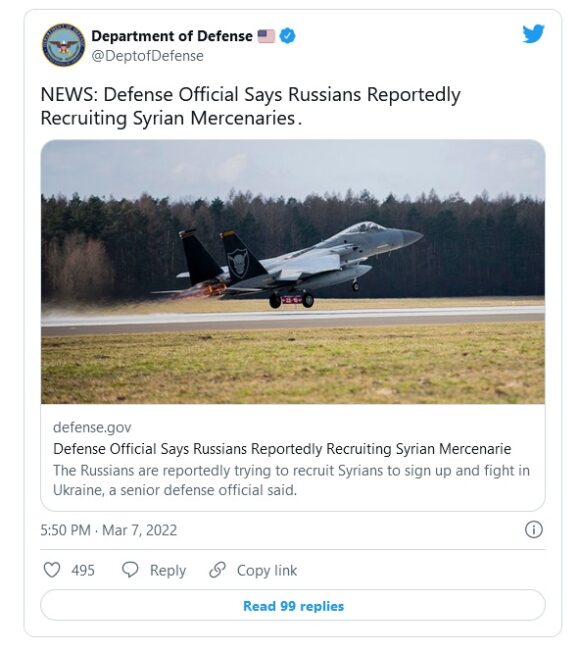 Russia is recruiting Syrians to fight on its behalf in the Kremlin’s invasion of Ukraine, a senior Pentagon official said yesterday.

“It is not clear to us whether they’ve set a quota for that and what that would be or how many they’ve gotten so far,” the unnamed official told reporters in a press briefing, according to Axios. “But we can corroborate reports that the Russians are trying to supplement their fighters with foreign fighters.”

The Wall Street Journal first reported the development on Sunday, saying Russia was recruiting Syrians with expertise in urban combat as the invasion reportedly stretched longer than Putin expected, stymied by a fierce resistance from Ukrainians seeking to defend their country.

The defense official told reporters that the Pentagon found it “noteworthy” that Putin “believes he needs to rely on foreign fighters to supplement what is a very significant commitment of combat power inside Ukraine as it is.”

The official said the Kremlin had already committed nearly 100% of the 150,000 troops amassed along the Ukrainian border since the invasion began last month.

“They continue to be frustrated by a stiff Ukrainian resistance, as well as their own internal challenges,” the defense official said.

Pentagon spokesperson John Kirby told The New York Times this week that U.S. analysts don’t have any details about the number of Syrians Russia has recruited or whether they may already be in Ukraine.

Britain’s Ministry of Defense said Sunday that Russian forces likely made “minimal ground advances” over the weekend and that it was highly unlikely the Kremlin had achieved its military objectives to date.

Ukrainian President Volodymyr Zelenskyy rallied his country in an address from his office in Kyiv on Monday night, saying the country would rebuild itself after it repelled the invading forces.

“There will be no trace of the enemy,” he said. “We will make our cities destroyed by the invader better than any city in Russia.”