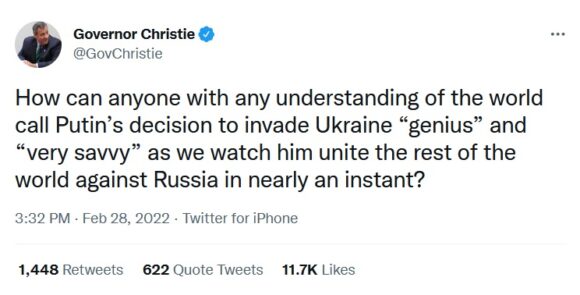 Former Republican New Jersey Governor Chris Christie blasted Donald Trump’s praise of the Russian invasion of Ukraine last week, saying history was watching despite the former president’s repeated comments about Vladimir Putin being a “genius” who had been “smart” about the ruthless assault.

“How can anyone with any understanding of the world call Putin’s decision to invade Ukraine ‘genius’ and ‘very savvy’ as we watch him unite the rest of the world against Russia in nearly an instant?” Christie asked yesterday on Twitter. He went on to say that Putin has two choices now: an “unwinnable occupation of Ukraine” or a “humiliating retreat.”

His comments, a direct attack on Trump, came after the former president dubbed Putin’s initial description of his invading Russian forces as peacekeepers a “genius” move. Meanwhile, most of rest of the world was condemning the Kremlin’s actions.

Trump defended those remarks at the Conservative Political Action Conference this past weekend, saying that, although the attack was “appalling,” Putin was “smart” and the “real problem is that our leaders are dumb.”

His statements about an invading world leader are remarkable even for Trump, who was known for his fondness of Putin during his four years in the White House, going so far as to ask Russia to hack his 2016 Democratic rival, Hillary Clinton, to gain access to her emails.

Christie has it right.  Trump has no understanding of the world.  He operates strictly on what might be beneficial for Donald!