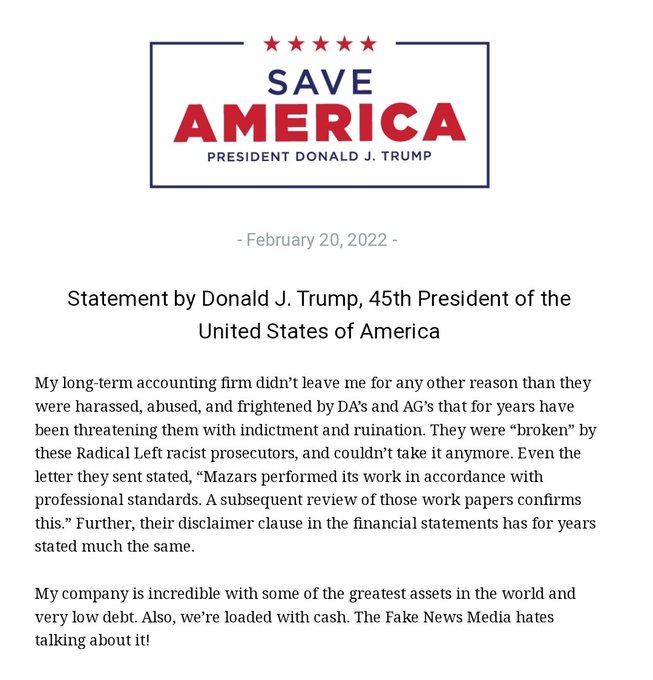 New York State is getting too close to Trump for comfort and lashed out in the media about  his long-time accounting firm’s decision last week to sever ties with the Trump Organization.

He insisted yesterday that the firm Mazars USA was “broken” by “Radical leftist racist prosecutors.”

As usual, Trump offers no evidence for his accusations that the prosecutors are racist. Manhattan District Attorney Alvin Bragg and state Attorney General Letitia James — who are both investigating Trump Organization business practices — are Black.

Trump quoted Mazars’ statement that it “performed its work in accordance with professional standards.” But Mazars didn’t say the same about the Trump Organization.

Mazars terminated its relationship, it explained in a letter that was part of a court document filed last week, because ten years of financial statements it had prepared with records provided by the Trump Organization could no longer be considered reliable.

It ducked out of its relationship with Trump as the attorney general investigates whether Trump inflated asset values to obtain bank loans and entice investors, and reduced values to lower tax bills

Trump also claimed in his first, lengthy, statement about Mazars’ defection last Tuesday that the company had been “threatened” and “intimidated” by James’ office to back away from his business. He went on at length to discuss his own company’s finances and financial practices.

The statement complicated legal issues for him. Just the day before, his attorneys had argued that Trump knows virtually nothing about the financial details of his own company, and therefore, could hardly be held accountable for practices being investigated by James.

James quickly fired off a letter to the judge presiding over her investigation about Trump’s first Mazars statement, noting that it flatly contradicted claims by his own attorneys.

Clearly, Trump knows “exactly what OAG is investigating,” she wrote, referencing the Office of the Attorney General.

According to some observers, such as conservative George Conway, the loss of his long-time accountants can be as bad, if not worse, for Trump than the consequences of his impeachment.