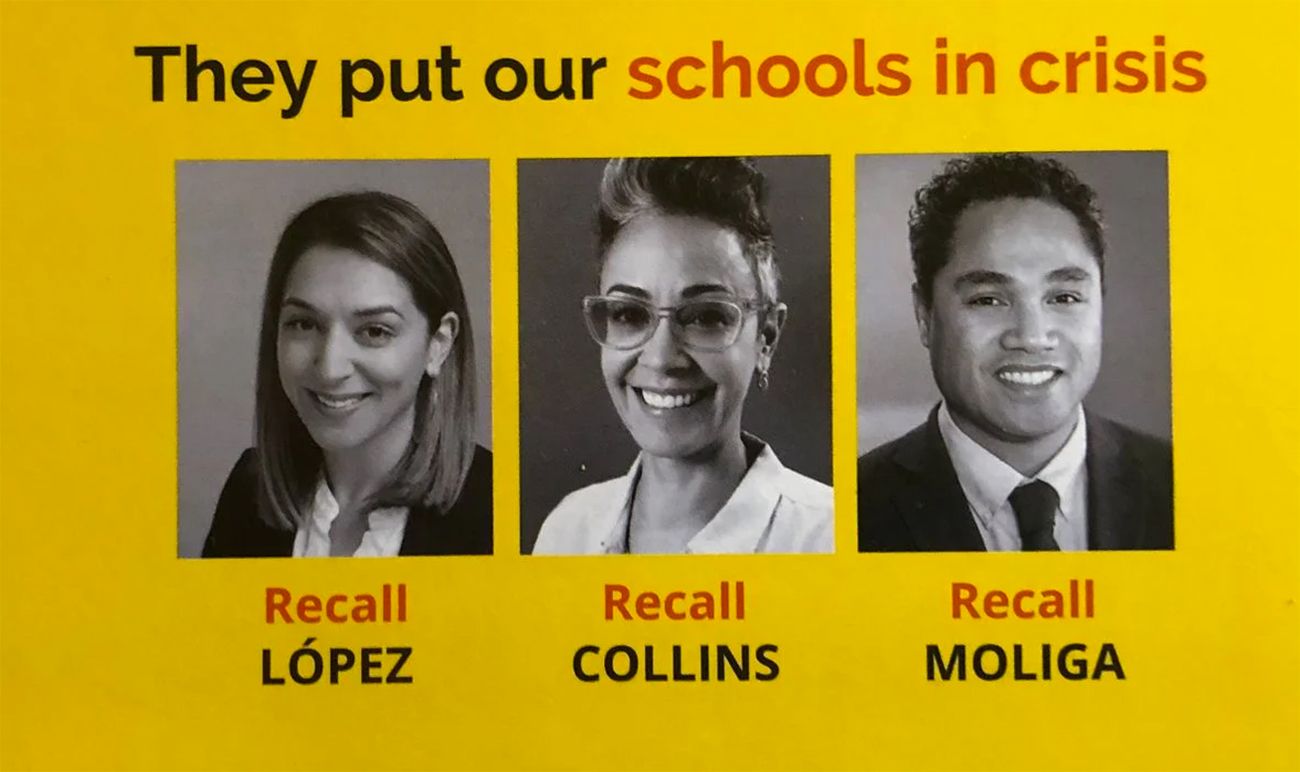 In a rare recall election fueled by pandemic anger, San Francisco voters ousted three members of the Board of Education on Tuesday, closing a bitter chapter in the city’s politics that was rife with infighting, accusations of racism and a flurry of lawsuits.

More than 70 percent of voters supported the recall of each member when initial results were released just before 9 p.m. Pacific time, and one of the board members conceded defeat. Those votes made up about one-quarter of registered voters in the city, and turnout was not expected to be considerably higher.

The vote stripped the members, Alison Collins, Gabriela López and Faauuga Moliga, of their positions on the seven-person board, which Ms. Lopez served as president. They will be replaced by members chosen by Mayor London Breed.  As reported by The New York Times and the San Francisco Chronicle.

“It’s the people rising up in revolt in San Francisco and saying it’s unacceptable to abandon your responsibility to educate our children,” said Siva Raj, a San Francisco parent of public school students who helped lead the signature campaign to put the recall election on the ballot.

The recall was a victory for parents who were angered that the district spent time deciding whether to rename a third of its schools last year instead of focusing on reopening them. It also appeared to be a demonstration of Asian American electoral power, a galvanizing moment for Chinese American voters in particular who turned out in unusually large numbers for the election.

In echoes of debates in other cities, many Chinese American voters were incensed when the school board introduced a lottery admission system for Lowell High School, the district’s most prestigious institution, abolishing requirements primarily based on grades and test scores. A judge last year ruled that the board had violated procedures in making the change.

“The voters of this city have delivered a clear message,” Ms. Breed, who supported the recall, said in a statement on Tuesday night.

The landslide result is already being analyzed for its implications for the city’s upcoming elections.

District Attorney Chesa Boudin, a progressive prosecutor, faces a recall election in June fueled by moderate San Franciscans worried about a spike in property crimes and hate crimes during the coronavirus pandemic. Ms. Breed is running for re-election next year.

On Tuesday, one of the ousted board members, Mr. Moliga, posted on social media that it had been an honor to serve the city. “It appears we were unsuccessful at defeating my recall,” he wrote. “We fought hard and ran a great campaign.”

“There are many more fights ahead of us,” he added.

In a city with more dogs than children, school board elections in San Francisco have for decades been obscure sideshows to the more high-profile political contests.

That changed with the pandemic — data released by the district suggests that remote learning increased racial achievement gaps — and the profusion of controversies that plagued the board.

The district captured national headlines last year for its botched and in some cases historically inaccurate effort to rename 44 public schools.

The targeted schools carry the names of a range of historical figures including Abraham Lincoln and the three other presidents chiseled into Mount Rushmore; Spanish conquerors such as Vasco Núñez de Balboa; John Muir, the naturalist and author; and Paul Revere, the Revolutionary War figure.

After a barrage of criticism, including from Ms. Breed, the board put the renaming process on hold. A judge ruled that the board had violated a California law on open meetings in its proceedings.

Criticism of the board grew stronger, while signature gathering for the recall effort was already underway, when controversial tweets written by Ms. Collins, the board’s vice president, were discovered. In them, she said Asian Americans were like slaves who benefited from working inside a slave owner’s house — a comparison that Asian American groups and many city leaders called racist.

The board voted to strip Ms. Collins of her vice presidency, which prompted her to sue members of the board and the district for $87 million. A judge dismissed the case.

David Lee, a political science lecturer at San Francisco State University, said the combination of the tweets and the changes to the admission policies at Lowell had empowered Asian American voters.

“It’s been an opportunity for the Chinese community to flex its muscles,” Mr. Lee said. “The community is reasserting itself.”

Asian American voters had punched below their weight in San Francisco in recent years, making up about 18 percent of active voters in recent elections — well below their 34 percent share in the city overall. But supporters of Tuesday’s recall election say Asian Americans played an outsize role.

Mr. Raj, the San Francisco parent, pointed to strong turnout in neighborhoods with large Asian American populations as well as a relatively high return rate among people who requested a Chinese-language ballot.

Ann Hsu, a San Francisco resident with two high school students in the public school system, helped register more than 500 Chinese American residents in the months before the election. Education, she said, was a powerful issue.

“That’s been ingrained in Chinese culture for thousands and thousands of years,” she said.

Ms. Hsu said she had observed some of the inner workings of the district in her role as a P.T.A. president of a high school as well as the chair of a Citizens’ Bond Oversight Committee, a body that oversees the district’s use of money raised through bonds. The oversight committee was formed last year after a whistle-blower notified the city attorney’s office that the school district had failed to create the board, which is required by law.

“The board is incompetent,” Ms. Hsu said.

Meredith W. Dodson, the executive director of the San Francisco Parent Coalition, a group formed during the pandemic to pressure the district to reopen schools, called the recall campaign a powerful demonstration of parental activism.

“We can never go back to the previous world where parents weren’t organized and weren’t lifting up their concerns together,” she said.