For most of the 2016 election and beyond, Donald Trump and his sycophants at Fox News moaned and groaned over Hillary Clinton’s private email server.  Clinton gave back yesterday and made light of allegations by former Trump administration staffers that they found ripped-up documents clogging a White House toilet and that they believe then-President Donald Trump had attempted to flush them.  These allegations appear in the forthcoming book by New York Times reporter Maggie Haberman titled “Confidence Man: The Making of Donald Trump and the Breaking of America.”

Trump, whose response to the Jan. 6, 2021, riot at the U.S. Capitol is being investigated by a House select committee, was discovered last week to have improperly removed boxes of documents from the White House in possible violation of the Presidential Records Act. Some of the documents contained in 15 boxes that have since been retrieved were marked “classified” and “top secret,” the Washington Post reported.

On Thursday, Trump issued a statement denying that he had ever flushed official documents down a White House toilet.

“Another fake story, that I flushed papers and documents down a White House toilet, is categorically untrue and simply made up by a reporter in order to get publicity for a mostly fictitious book,” Trump said in the statement.

Haberman’s reporting was corroborated, however, by Bloomberg reporter Jennifer Jacobs.

Clinton is offering a hat with the message, “BUT HER EMAILS,” that harks back to the FBI investigation and subsequent media coverage that stemmed from Clinton’s use of a private email server while she was secretary of state. Many people — including Clinton herself — believe that outsize attention to this, which pales in comparison to many scandals surrounding Trump, may have kept her from winning the 2016 presidential election. The FBI eventually cleared Clinton of allegations that she and her staff had deliberately mishandled classified information.

The hat that appears in Clinton’s tweet, meanwhile, can be purchased for $30 at OnwardTogether.org, which notes that “all proceeds go to supporting progressive groups working to build a fairer, more inclusive America.”

You can’t make this stuff up! 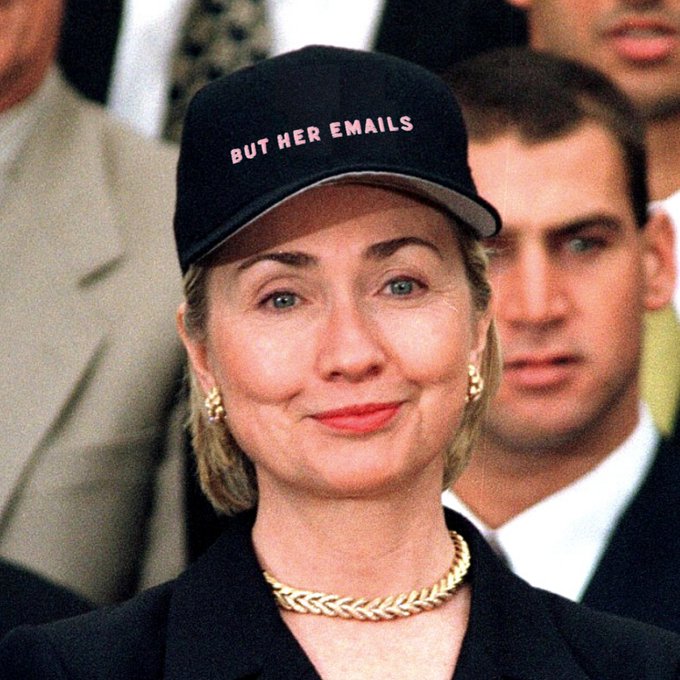