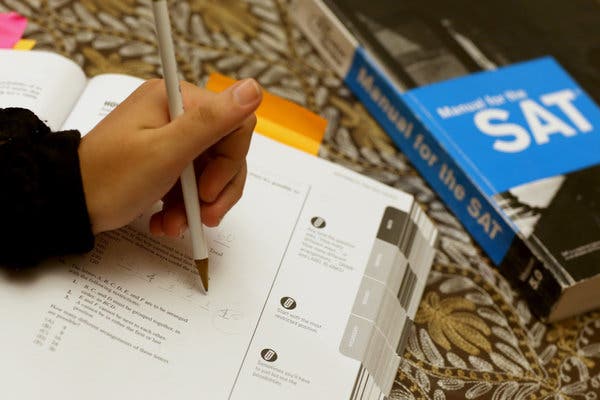 The College Board announced yesterday that the era in which high-schoolers had to make sure their No. 2 pencils were sharpened and their answer bubbles were completely filled in, has ended. Starting in 2024, the SAT exam will only be offered digitally on laptops or tablets at testing centers. It will also be shortened from three hours to two hours. As reported by The New York Times.

The College Board is trying to retool the exam that has stressed out millions of students in the face of questions about whether college admissions tests are fair, or even necessary.

A growing number of colleges have eliminated the requirement that applicants submit scores from the SAT or the competing ACT, and the trend of “test-optional” admissions accelerated greatly during the coronavirus pandemic. More than 1,800 schools did not require standardized test scores for 2022 admissions, according to the nonprofit organization FairTest.

The number of SAT test takers declined from 2.2 million high schoolers who graduated in 2020 to 1.5 million in the class of 2021, according to the College Board. About 1.7 million students in the class of 2022 have taken the test to date.

In addition to its transition to a digital test, the College Board will also allow calculators on the entire math section, shorten reading passages and reflect a wider range of topics.

In pilot runs that were conducted last year, 80 percent of students said they found the digital tests less stressful, according to the College Board, which said laptops or tablets would be provided for students who need them.

Priscilla Rodriguez, vice president of college readiness assessments for the College Board, said the changes would make the test more relevant.

“In a largely test-optional world, the SAT is a lower-stakes test in college admissions,” Ms. Rodriguez said in a statement. “Submitting a score is optional for every type of college, and we want the SAT to be the best possible option for students.”

Christal Wang, a junior at Thomas Jefferson High School for Science and Technology in Alexandria, Va., took both the digital test and the pencil test last year. She said the digital version had shorter reading passages with one or two questions, while the traditional test had longer passages that required several responses.

“I definitely preferred that format with the shorter passages, just because it was a lot easier to read and easier to stay focused,” Ms. Wang, 16, said. “I also felt less drained at the end.”

In recent years, the SAT has come under increasing criticism from those who say that standardized tests handicap poor and minority students, partly because they may not have access to expensive test preparation classes.

Bob Schaeffer, executive director of FairTest, which questions the use of standardized tests in college admissions, said in a statement that the shift to a digital SAT “does not magically transform it to a more accurate, fairer or valid tool for assessing college readiness.”

In response to criticism of its test, the College Board has said that SAT scores serve to strengthen the applications of many students who test better than their high school grade-point averages would indicate.

Some college administrators said the upcoming move to a digital platform was overdue. A year ago, the College Board announced it would do away with SAT subject tests and the essay question.

“It’s about time that they’ve moved away from paper and pencil,” said Kent R. Hopkins, vice president for academic enterprise enrollment at Arizona State University. Mr. Hopkins, who serves on a College Board advisory panel, said he was hopeful that the new format would enhance security and make the test less “clunky.”

The large public school has historically been test-optional, although most of its applicants submit standardized test scores, Mr. Hopkins said.

College admissions testing centers were forced to shut down early in the pandemic, and many colleges — including some of the nation’s leading institutions — waived the requirements, at least temporarily. Some have eliminated them altogether.

The University of California system announced last year that standardized test scores would no longer be a factor in admissions decisions at its 10 schools after it settled a lawsuit claiming that the test created inequities in assessing a student’s chances of success in college.

After the decision by California’s prestigious public system, Harvard, one of the country’s most elite private schools, announced in December that it would not require the SAT or ACT through the next four years, a move observers thought would expedite the movement to eliminate standardized test scores.

This is probably a good move by the College Board.  As for me, I keep a supply of No. 2 pencils in my desk as well as a case of large erasers that neatly fit on top of them.