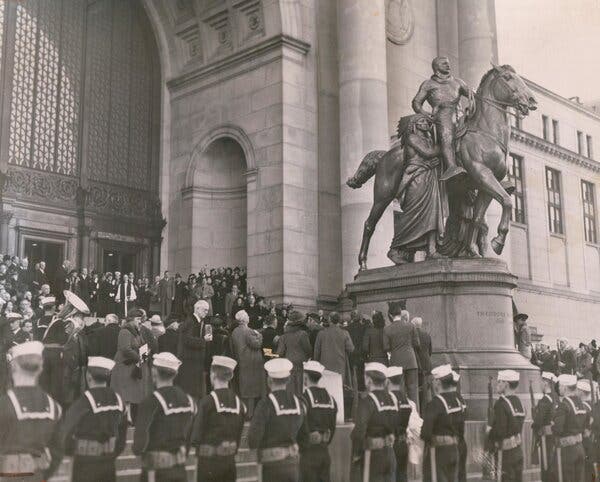 The unveiling of the statue, in 1940,  at the American Museum of Natural History. Credit…The New York Times

A crane descended last night on the bronze statue of Theodore Roosevelt, lifting his upper body from the pedestal where it has presided at the American Museum of Natural History since 1940. The remainder of the sculpture, now surrounded by scaffolding, is scheduled to leave in pieces through the coming week. Flanked by representations of a Native American man and an African man on foot, the statue has stood for more than 80 years..

A spokeswoman for the institution said that the approximately $2 million removal process was conducted with historic preservation specialists and several dozen workers. It was approved by multiple New York City agencies.  As reported by The New York Times.

The New York City Public Design Commission voted last June to remove the statue; in November, its destination — the new Theodore Roosevelt Presidential Library in Medora, N.D. — was announced. The statue is moving to storage and will be shipped to the presidential library within a few weeks.

The removal caps a decades-long saga of protests by critics who argued that the equestrian statue symbolized the painful legacy of museums upholding images of colonialism and racism in their exhibitions. Activists have targeted the monument since the 1970s; in recent years, they have tried shrouding the sculpture with a parachute and defacing it with red paint. Holland Cotter, co-chief art critic for The New York Times, characterized the statue as one of the most contested images, and monuments, in New York City.

“The time has come to move it,” the museum’s president, Ellen V. Futter, said in an interview with The New York Times when she announced the sculpture’s impending removal in 2020.

The statue, designed by the American sculptor James Earle Fraser in 1939, was one of four memorials that a city commission had reconsidered in 2017, ultimately deciding in a split decision to leave it in place and add context. Its 2019 exhibition, “Addressing the Statue,” discussed the figures walking beside Roosevelt and Roosevelt’s complex legacy, which included overt racism in his later years.

But efforts to contextualize the statue mattered little to those who view it as a barometer of the heated national debate over who gets honored in bronze and marble. Protesters across the political spectrum have used the Roosevelt monument as a backdrop for their opinions on the topic. And national efforts to dismantle statues for Confederate generals like Robert E. Lee have widened to include figures like Christopher Columbus and Winston Churchill.

The most recent example of a monument removed in New York was that of another former president: In November, the City Council relocated a statue of Thomas Jefferson from its chambers to the New-York Historical Society after legislators objected to the president’s legacy as an enslaver. 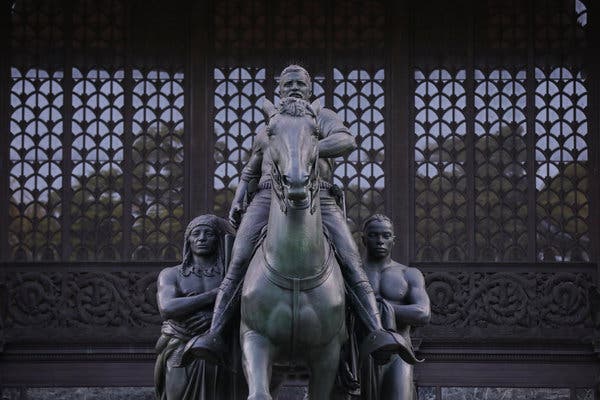