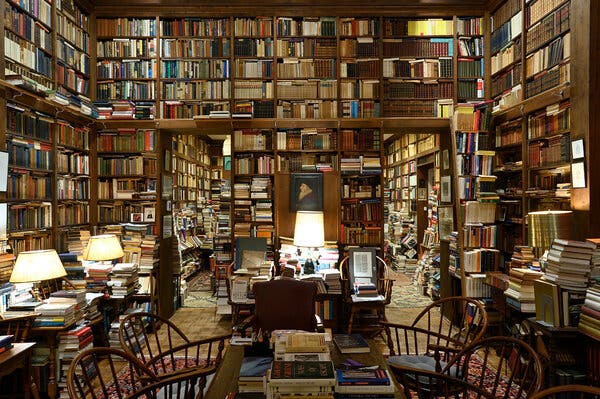 The New York Times has an article  this morning for those of us who love our home libraries.  It focuses on a photograph (above) of  the home library of Johns Hopkins professor Dr. Richard Macksey in Baltimore, who passed away in 2019. Dr. Macksey’s book collection clocked in at 51,000 titles.  The image goes viral on Twitter annually. Here is an excerpt from the article.

“The author and political activist Don Winslow tweeted a photograph of an avid reader’s dream library. Bathed in the buttery glow of three table lamps, almost every surface of the room is covered with books. There are books on the tables, books stacked on mahogany ladders, and books atop still more books lining the shelves of the room. “I hope you see the beauty in this that I do,” Mr. Winslow wrote in the tweet, which has been acknowledged with 32,800 hearts.

If you spend enough time in the literary corners of Twitter, this image may look familiar. It rises again just about annually, and the library has been attributed over the years to authors including Umberto Eco and buildings in Italy and Prague. As with other images featuring beautiful bookshelves, people go absolutely bananas for it. Mr. Winslow’s post received 1,700 comments, including one from a professor at Pace University who has been using the photo as his Zoom background.

“It’s clearly the home of a person who loves and collects books,” Mr. Winslow said in an email through his agent, Shane Salerno. “For me, I think that photo is as stunning as a sunset. I could spend days and days locked in that library examining each book.” He noted that there’s something comforting about the image, since “it’s a room you could happily get lost in.”

I would have loved to have spent time in Macksey’s library but I will settle for one (see below) of the two that are in my home. 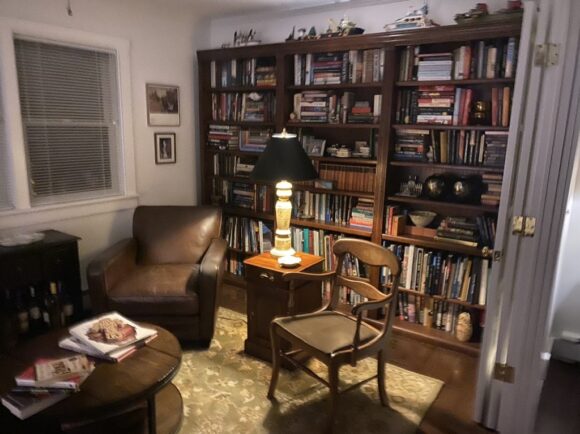