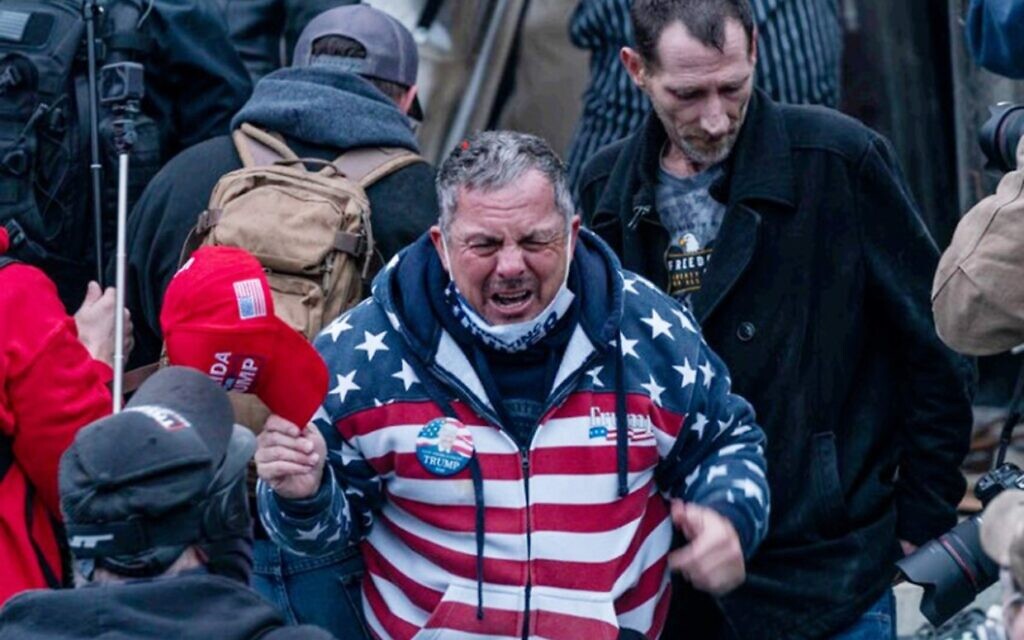 In the past two weeks,  the prison sentences for several of the insurrectionists at the Capitol on January 6th have gotten stiffer.

Robert Palmer, a Capitol rioter who attacked police officers working to hold back the angry pro-Trump mob was sentenced last Friday to 63 months behind bars, the most so far for anyone sentenced in the insurrection.

Palmer, 54, of Largo, Florida, wept as he told U.S. District Judge Tanya Chutkan that he recently watched a video of his actions that day and could not believe what he was seeing.

“Your honor. I’m really really ashamed of what I did,” he said through tears.

Palmer was one of several rioters sentenced on Friday in District of Columbia court for their actions that day. Following a rally near the White House led by then-President Donald Trump, an angry mob descended on the Capitol, disrupting the certification of Joe Biden’s Electoral College victory.

At the Capitol, scores of police were beaten and bloodied, five people died and there was about $1.5 million in damage done to the U.S. Capitol. Palmer is the 65th defendant to be sentenced overall. More than 700 people have been charged.

But Palmer made his way to the front line during the chaos and started to attack, throwing a wooden plank, spraying a fire extinguisher, then hurling it when it was done. He rooted around for other objects, prosecutors said. He was briefly pepper-sprayed by police before he attacked officers again with a pole. He pleaded guilty to attacking officers.

Palmer said in a handwritten letter to the judge that he felt betrayed by Trump and his allies who fed them conspiracy theories.

“Trump supporters were lied to by those at the time who had great power,” he wrote. “They kept spitting out the false narrative about a stolen election and how it was ‘our duty’ to stand up to tyranny.”

Palmer, who has been held at the D.C. jail among fetid conditions that prompted a review by authorities, said it wasn’t fair that he be punished so severely when the ringleaders aren’t even behind bars.

The judge agreed — to a point. “It is true that the people who extorted you and encouraged you and rallied you to go and take action have not been charged,” she said. “That is not the court’s decision. I have my opinions but they are not relevant.”

Before Palmer’s sentencing of 63 months, the longest prison term handed down for a Capitol rioter was 41 months. That was the sentence received by both Jacob Chansley, the Arizona man who wore a horned fur hat and face paint inside the Capitol; and New Jersey gym owner Scott Fairlamb, the first person to be sentenced for assaulting a law enforcement officer during the riot.

Another insurrectionist, Devlyn Thompson, was sentenced yesterday to nearly four years in prison.

Thompson, 28, wrote an apology letter to the officer whom he assaulted during a melee in a tunnel where police battled with dozens of rioters for more than two hours. He also expressed remorse for his actions in a letter to U.S. District Judge Royce Lamberth, who sentenced him to three years and 10 months in prison followed by three years of supervised release.

Justice Department prosecutors recommended a four-year prison sentence for Thompson, a longtime resident of Washington state who moved to Georgia approximately six months before the riot.

Defense attorney Elizabeth Kelley requested a one-year prison sentence for Thompson. He has autism spectrum disorder and “functions in many ways as a young child,” Kelley wrote in a court filing. She said Thompson’s condition influenced his behavior on Jan. 6 and distorted his understanding of what happened that day.

“Autism is not and should not be an excuse for bad behavior, but rather, it should be considered when a person’s individual culpability and degree of social understanding is called into question,” she wrote.

The judge also said autism isn’t an excuse for assaulting a police officer. He noted that Thompson had a job that paid him $90,000 a year before the riot.

Thompson has been jailed since he pleaded guilty in August to assaulting a police officer with a dangerous weapon, a metal baton. The charge carries a maximum of 20 years imprisonment, but sentencing guidelines for Thompson’s case recommended a prison sentence ranging from 46 to 57 months.

Prosecutors say one of the most violent confrontations on Jan. 6 was in the tunnel, where a mob and police fought for control of a Capitol entrance in an area known as the Lower West Terrace. Surveillance video captured Thompson with more than 190 other rioters in the tunnel. He struck a police officer’s hand with a baton that he found in the tunnel. Others assaulted police with poles, sticks and other makeshift weapons.

Metropolitan Police Officer Michael Fanone told a congressional committee in July that the fight in the tunnel was “nothing short of brutal.” He was pulled into the mob, beaten and repeatedly shocked with a stun gun.

I do not find the sentences for Palmer and Thompson too harsh.  What they did was an attack on our government where people died.