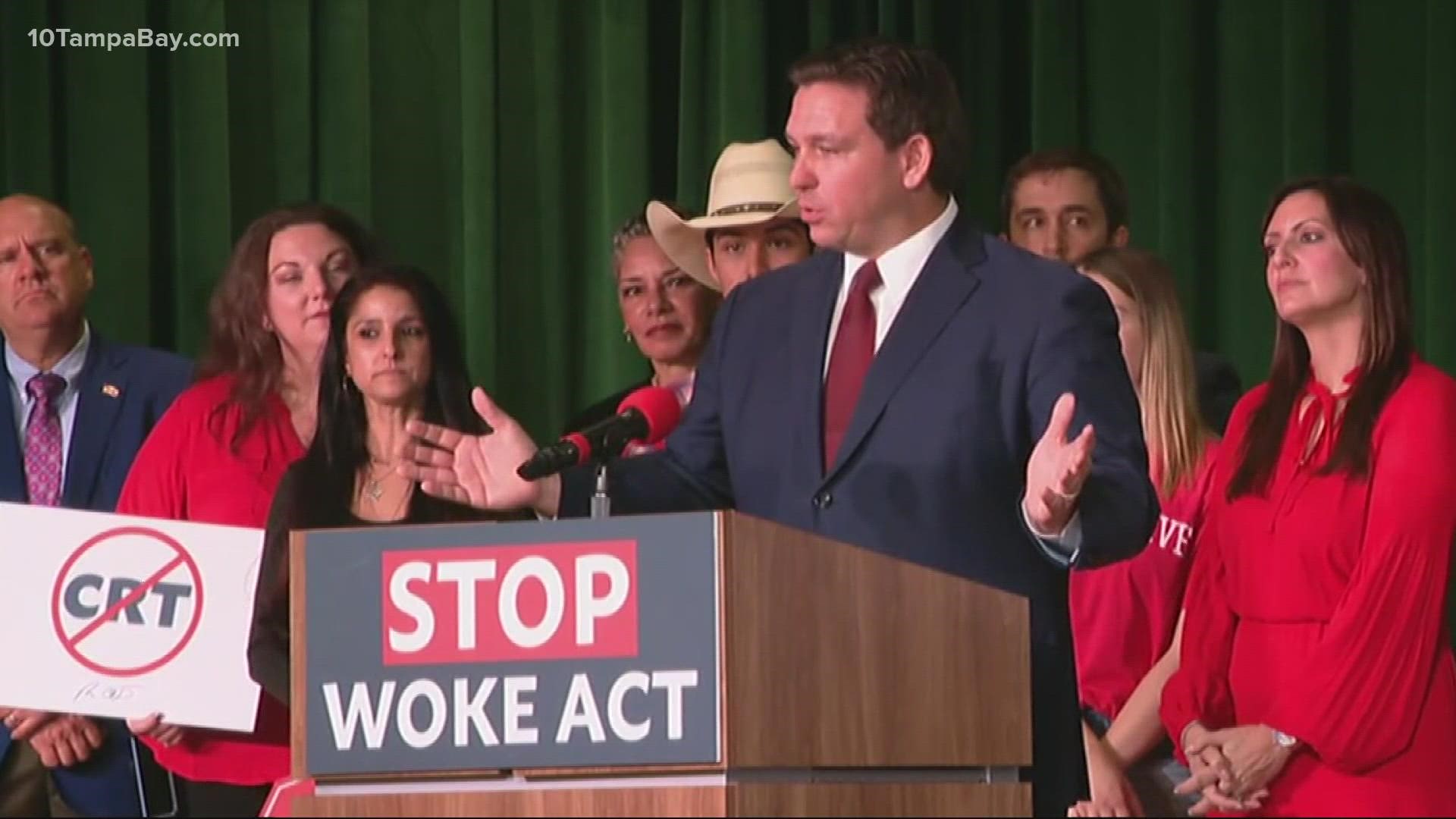 Florida Governor Ron DeSantis has proposed codifying into law the state Board of Education’s ban on critical race theory, with provisions that would defund schools that hire CRT “consultants,” and would allow parents to sue districts over CRT and recover attorney fees.

In workplaces, to the extent that existing Florida civil rights law doesn’t protect employees from being subjected to “racism” in corporate diversity training, DeSantis’ Stop WOKE Act would seek to address that, he said yesterday.  As reported by The Huffington Post and other media

“We believe this corporate CRT is basically corporate-sanctioned racism and they’re trying to shove it down employees’ throats,” he said, describing CRT consultants as a “cottage industry” that charge a “king’s ransom” for their services.

If DeSantis’ measure (the full name is the Stop the Wrongs to Our Kids and Employees Act) passes the GOP-controlled state legislature, Florida would become the 10th state where legislators have approved anti-CRT laws. DeSantis’ office called it the “strongest legislation of its kind in the nation.”

There’s no universally accepted definition of “critical race theory” outside its grounding in academia. The GOP contends that CRT is any teaching that probes racism or casts the nation’s history in a negative light, while schools generally counter that CRT, as the concept is understood in higher ed, isn’t actually being taught to young students.

Lately, Republicans have even argued that social and emotional learning and equity training are a bait-and-switch for what they call critical race theory.

“Just understand that when you hear ‘equity’ used, that is just an ability for people to smuggle in their ideology,” DeSantis said.

Florida’s governor has made a major political issue out of CRT in the state’s public schools. In June, he directed the Florida Board of Education to ban CRT, and has vowed to get the state’s GOP apparatus involved in local school board races.

He argued that his newest legislative proposal, particularly the avenue for legal recourse, is a way to give parents more control over their children’s education.

The governor’s office said the legislation would give parents a “private right of action” to sue a school district on the basis of unlawful discrimination if they learn it’s teaching CRT, and then recover any legal fees if they’re successful.

DeSantis said districts that violate anti-CRT rules are more likely to fear a lawsuit than a fine because the legal proceedings may uncover evidence of CRT being taught in schools.

“When they say they’re not doing CRT and then you have all this information showing that they are doing it, it really is an uncomfortable position for them,” DeSantis said. “So I think that gives parents the ability to go in and ensure that our state standards are being followed.”

The Stop WOKE Act would codify into law that “no taxpayer dollars should be used to teach our kids to hate our country or to hate each other,” he said.

DeSantis, who’s considered a potential 2024 presidential candidate on the GOP side, rolled out his legislation in Wildwood, Florida, surrounded by activists with anti-CRT and anti-woke signs. He took the opportunity to denounce Marxism and “woke ideology.”

The president of the Florida Education Association, the state’s largest union with more than 150,000 members, said in a statement that educators should be able to teach history accurately to their students.

“Teachers should have the freedom to teach honest, complete facts about historical events like slavery and civil rights without being censored by politicians,” FEA President Andrew Spar said. “The governor’s announcement today goes against this fundamental American value. All Florida’s children should receive a fact-based education that doesn’t change depending on their ZIP code.”

The union previously came out against the state Board of Education’s CRT ban, which specifically bars the use of The New York Times’ 1619 Project and similar teachings in curricula.

De Santis is wrong in his assessment of CRT.  However, as an issue, it will continue to be in the news for years to come.