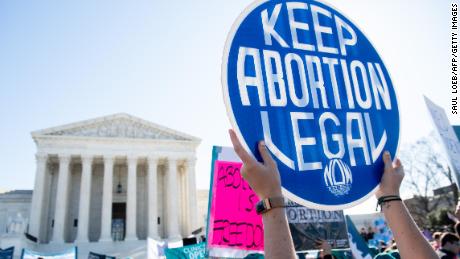 The U.S. Supreme Court said yesterday it would not block an extreme new Texas law that criminalizes abortion after six weeks, a striking defeat for abortion rights advocates who say the ban is a direct assault on Roe v. Wade.  About 85% to 90% of abortions in Texas occur after the sixth week of pregnancy.

The ruling was 5-4, with Chief Justice John Roberts siding with the court’s three liberal members.

The majority issued a brief decision saying that, although women’s health groups had raised “serious questions about the constitutionality” of the law, the application failed to “carry the burden” necessary for an injunction while any legal challenges work their way through the courts.

The decision came just under a day after the court effectively allowed the Texas abortion ban to go into effect by not taking any action after a coalition of abortion rights groups filed an emergency appeal to halt it.

The new law, Senate Bill 8, effectively bans abortions at six weeks, when many women don’t yet realize they’re pregnant. It also deputizes private citizens who can receive bounties of up to $10,000 for suing anyone accused of “aiding and abetting” patients who seek an abortion in Texas.

Justice Sonia Sotomayor excoriated her conservative colleagues, saying the court had “silently acquiesced in a state’s enactment of a law that flouts nearly 50 years of federal precedents.”

“The court’s order is stunning,” she wrote in her dissent, joined by Justices Stephen Breyer and Elena Kagan. “Presented with an application to enjoin a flagrantly unconstitutional law engineered to prohibit women from exercising their constitutional rights and evade judicial scrutiny, a majority of Justices have opted to bury their heads in the sand.”

Roberts, in a separate dissent, said he would have blocked the law while it was before the court, calling it “not only unusual, but unprecedented.”

“Although the Court does not address the constitutionality of this law, it can of course promptly do so when that question is properly presented,” he wrote. “At such time the question could be decided after full briefing and oral argument, with consideration of whether interim relief is appropriate should enforcement of the law be allowed below.”

The Texas law, however, is notable in that it was drafted specifically to be difficult to challenge in court. The bill bars state officials from enforcing the new law but, by deputizing private citizens, it makes it much harder to craft a legal argument against it.

Abortion rights advocates have said the new law will effectively force tens of thousands of people to travel outside the state in order to get an abortion, placing a huge financial and emotional burden on them. Women’s rights advocates have also argued the bill could easily become a blueprint for other states hoping to also deny a woman’s right to choose abortion.

A sad day for women’s rights!