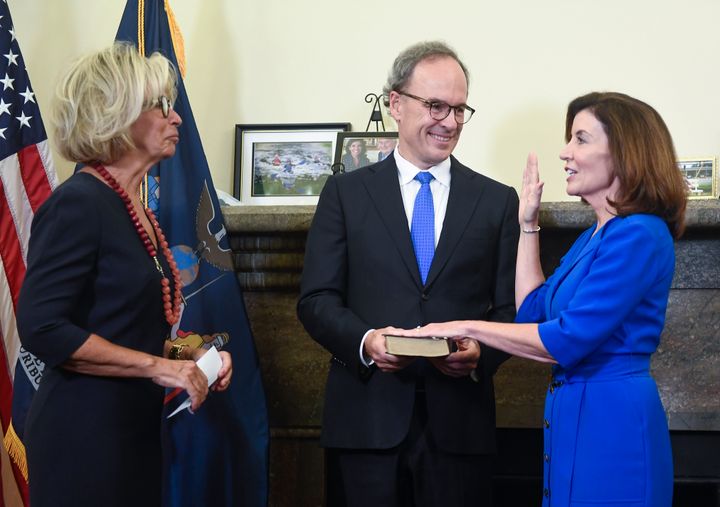 Kathy Hochual Sworn In as Governor of New York

Kathy Hochul became the first female governor of New York at the stroke of midnight, taking control of a state government eager to get back to business after months of distractions over sexual harassment allegations against Andrew Cuomo.

The Democrat from western New York was sworn in as governor in a brief, private ceremony in the New York State Capitol overseen by the state’s chief judge, Janet DiFiore.

Afterward, she told WGRZ, a Buffalo television station, she felt “the weight of responsibility” on her shoulders.

“I’ll tell New Yorkers I’m up to the task. And I’m really proud to be able to serve as their governor and I won’t let them down,” she said.

Cuomo left office at 12:00 a.m, two weeks after he announced he would resign rather than face a likely impeachment battle. He submitted his resignation letter late Monday to the leaders of the state Assembly and Senate.

On his final day in office, Cuomo released a pre-recorded farewell address in which he defended his record over a decade as New York’s governor and portrayed himself as the victim of a “media frenzy.”

Hochul was scheduled to have a ceremonial swearing-in event Tuesday morning at the Capitol, with more pomp than the brief, legally required event during the night.

She planned to meet with legislative leaders later in the morning and make a public address at 3 p.m.

For the first time, a majority of the most powerful figures in New York state government will be women, including state Senate Majority Leader Andrea Stewart-Cousins, Attorney General Letitia James and the chief judge, DiFiore. The state Assembly is led by a man, Speaker Carl Heastie.

Hochul will inherit immense challenges as she takes over an administration facing criticism for inaction in Cuomo’s final months.

COVID-19 has made a comeback, with new cases up nearly 1,370% since late June. Hospitalizations are climbing even as schools prepare to go back into session.

Big decisions lay ahead on whether to mandate masks or vaccines for certain groups, or whether to reinstate social distancing restrictions if the state’s latest wave of infections worsens. Hochul has said she favors making masks mandatory for schoolchildren, a contrast with Cuomo, who said he lacked that authority.

The economy remains unsettled. Jobs lost during the pandemic have been coming back, but unemployment remains double what it was two years ago.

New York has also struggled to get federal relief money into the hands of tenants behind on their rent because of the pandemic, releasing just 6% of the budgeted $2 billion so far. Thousands of households face the possibility of losing their homes if the state allows eviction protections to expire.

Hochul also faces questions about whether she’ll change the culture of governance in New York, following a Cuomo administration that favored force over charm.

Hochul, who once represented a conservative Western New York district in Congress for a year and has a reputation as a moderate, is expected to pick a left-leaning state lawmaker from New York City as her lieutenant governor.

“She’s very experienced and I think she’ll be a refreshing and exciting new governor,” he said.

We wish her well!