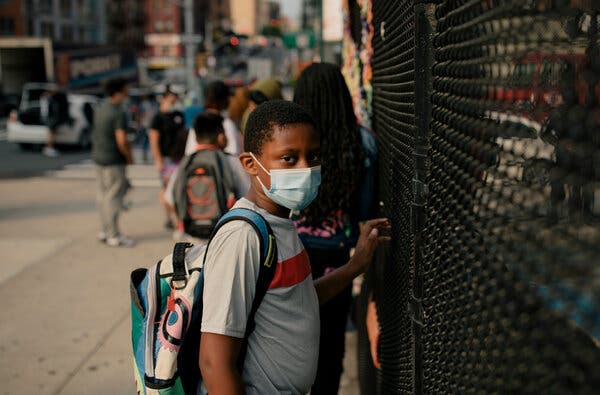 Credit…Jose A. Alvarado Jr. for The New York Times

The New York Times editorial this morning entitled, “The School Kids Are Not Alright,” highlights the increasingly desperate situation our schools and our children find themselves as they continue to battle the coronavirus pandemic.  As the editorial states, it has been distressing “seeing how governors and state education officials abdicate responsibility for managing the worst disruption of public schooling in modern history and leaving the heavy lifting to the localities.”  We are putting a generation of children at risk by a slapdash system of policies that vary from locality to locality and from state to state.  In addition to their educations, many of these policies have taken and will continue take a toll on children’s health and lives.

Below is the entire editorial.

“The School Kids Are Not Alright”

One of the most distressing aspects of the Covid pandemic has been seeing governors and state education officials abdicate responsibility for managing the worst disruption of public schooling in modern history and leaving the heavy lifting to the localities. Virtually every school in the nation closed in March 2020, replacing face-to-face schooling with thrown-together online education or programs that used a disruptive scheduling process to combine the two. Only a small portion of the student body returned to fully opened schools the following fall. The resulting learning setbacks range from grave for all groups of students to catastrophic for poor children.

From the start, elected officials seemed more concerned about reopening bars and restaurants than safely reopening schools that hold the futures of more than 50 million children in their hands. Failed leadership continues to be painfully evident as the states enter yet another pandemic school year without enforcing common-sense public health policies that would make a much-needed return to in-person schooling as safe as possible. These policy failures are compounding at a time when the highly infectious Delta variant is surging and the coronavirus seems likely to become a permanent feature of life.

Consider a new state-by-state analysis of reopening policies by the nonprofit Center on Reinventing Public Education. The analysis shows that many states have urged localities to return to in-person schooling while promoting policies that conflict with the goal of educating young people in safety. For example, as of this month, nearly one-fourth of the states had banned Covid-19 vaccination requirements, hamstringing localities that want to prioritize student safety. As of early August, only 29 states had recommended that students wear masks — down from the 44 states that did so last fall — and nine states had banned masking requirements. President Biden took the right approach on Wednesday when he announced that his Education Department would use its broad authority to deter the states from barring universal masking in classrooms.

State leaders would be wise to further protect children by requiring teachers to be vaccinated — without exception. Meanwhile, parents who wish to know what proportion of the teaching staff has been vaccinated are being thwarted by the fact that only a few states are publicly reporting this information.

Governors and other elected officials are trying to whistle past the devastating learning setbacks that schoolchildren incurred during the shutdown. That story is coming to light in studies and reports that lay out the alarming extent to which all groups of students are behind where they should be in a normal academic year and how the most vulnerable students are experiencing the steepest drop-offs in learning.

An analysis by N.W.E.A., a nonprofit that provides academic assessments, for example, found that Latino third graders scored 17 percentile points lower in math in the spring of 2021, compared to the typical achievements of Latino third graders in the spring of 2019. The decline was 15 percentile points for Black students and 14 percentile points for Native American students, compared with similar students in the past. As Sarah Mervosh of The New York Times describes the situation, the pandemic amplified disadvantages rooted in racial and socioeconomic inequality, transforming an educational gap into a gulf.

A sobering report by the consulting firm McKinsey sounds a similar alarm. Among other things, it notes that the pandemic has widened existing opportunity and achievement gaps and made high schoolers more likely to drop out. As the authors say: “The fallout from the pandemic threatens to depress this generation’s prospects and constrict their opportunities far into adulthood. The ripple effects may undermine their chances of attending college and ultimately finding a fulfilling job that enables them to support a family.” Unless steps are taken to fill the pandemic learning gap, the authors say, these people will earn less over their lifetimes. The impact on the U.S. economy could range from $128 billion to $188 billion every year as the cohort enters the work force.

These findings constitute a scalding rebuke of those who have minimized the impact of the school shutdowns. Perhaps the most grotesque of these minimizing arguments holds that concerns about learning loss are being manufactured by educational testing companies with dollar signs in their eyes.

Children’s advocates at the United Nations got it right last month when they admonished governments around the globe for reacting to the pandemic by ending in-person schooling for long periods instead of using mitigation strategies to contain infection. This communiqué, issued by UNESCO and UNICEF, noted that the shutdown placed children at risk of developmental setbacks from which many of them might never recover, pointed out that primary and secondary schools are not among the main drivers of the pandemic and called for governments to resume in-person instruction as quickly as possible.

In the United States, a growing body of research shows that the suffering of poor children during the pandemic was compounded by the fact that their schools were more likely to remain closed than schools serving higher-income students. This left poor students more dependent on online education. A recent analysis by the National Center for Research on Education Access and Choice found that schools in districts with higher percentages of Black and Latino children were more likely to have remote schooling and that, with all other things being equal, districts with more people living in poverty “were more likely to have remote instruction.”

Remote instruction was clearly a factor in driving what researchers call disenrollment. For example, research by Thomas S. Dee, a professor at Stanford University, and his associates finds that schools that went strictly remote experienced a 42 percent increase in disenrollment compared with those that offered full-time in-person learning. Beyond that, as The Times recently reported, more than a million children who had been expected to enroll in local schools did not show up, either in person or online: “The missing students were concentrated in the younger grades, with the steepest drop in kindergarten — more than 340,000 students.”

Under the best of circumstances, this means that some of the country’s most vulnerable children will begin first grade without the benefit of having had a crucial preparatory year. Under a more ominous scenario, some of the children who lost connection to school in the upper grades may not return to class at all unless districts make a concerted effort to bring them back into the fold.

The learning catastrophe that has befallen the country’s most vulnerable children will take longer than one academic year to remedy. For starters, states and localities will need to create intensive plans for helping children catch up while moving them through new academic material and to devise systems for measuring progress toward clearly stated goals. This project will not be easy to accomplish. But pretending that everything is fine — and that no extraordinary measures are needed — is a recipe for disaster.