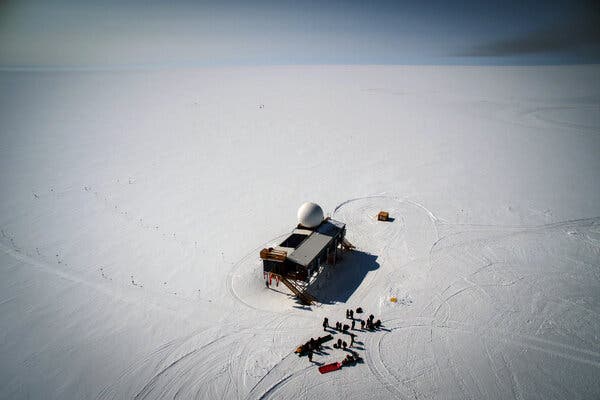 Something extraordinary happened last Saturday at the frigid high point of the Greenland ice sheet, two miles in the sky and more than 500 miles above the Arctic Circle: It rained for the first time.

The rain at a research station — not just a few drops or a drizzle but a stream for several hours, as temperatures rose slightly above freezing — is yet another troubling sign of a changing Arctic, which is warming faster than any other region on the planet. As reported by the New York Times.

“It’s incredible, because it does write a new chapter in the book of Greenland,” said Marco Tedesco, a researcher at Lamont-Doherty Earth Observatory of Columbia University. “This is really new.”

At the station, which is called Summit and is occupied year-round under the auspices of the National Science Foundation, there is no record of rain since observations began in the 1980s. And computer simulations show no evidence going back even further, said Thomas Mote, a climate scientist at the University of Georgia.

Above-freezing conditions at Summit are nearly as rare. Before this century, ice cores showed they had occurred only six times in the past 2,000 years, Martin Stendel, a senior researcher at the Danish Meteorological Institute, wrote in an email message.

But above-freezing temperatures have now occurred at Summit in 2012, 2019 and this year — three times in fewer than 10 years.

The Greenland ice sheet, which is up to two miles thick and covers about 650,000 square miles, has been losing more ice and contributing more to sea-level rise in recent decades as the Earth has warmed from human-caused emissions of carbon dioxide and other heat-trapping gases.

The surface of the ice sheet gains mass every year, because accumulation of snowfall is greater than surface melting. But overall, the sheet loses more ice through melting where it meets the ocean, and through the breaking-off of icebergs. On average over the past two decades, Greenland has lost more than 300 billion tons of ice each year.

This year will likely be an average one for surface accumulation, said Dr. Stendel, who is also coordinator of Polar Portal, a website that disseminates the results of Danish Arctic research. Heavy snowfall early in the year suggested it might be an above-average year for accumulation, but two periods of warming in July and another in early August changed that by causing widespread surface melting.

The warming that accompanied the rain last Saturday also caused melting over more than 50 percent of the ice sheet surface.

Dr. Mote said that these melting episodes were each “one-off” events. “But these events seem to be happening more and more frequently,” he said. “And that tells the story that we are seeing real evidence of climate change in Greenland.”

Something to think about!