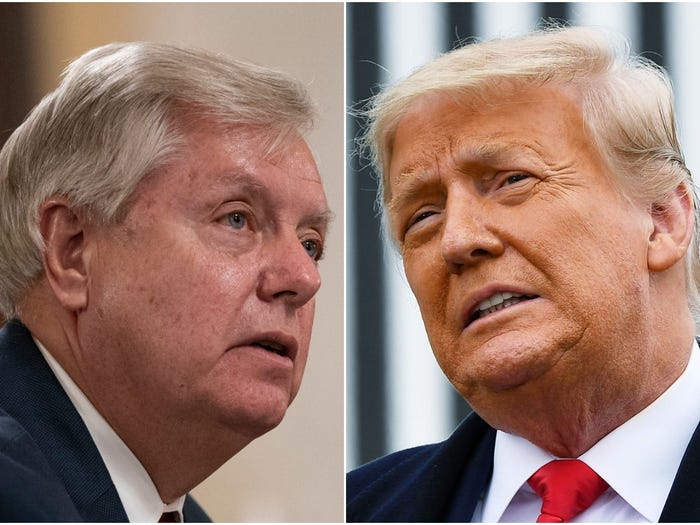 CNN’s Chris Cillizza had an op-ed entitled, The Titanic Hubris of Lindsey Graham, who thinks that he alone can fix Trump and make him a unifying figure for the Republican Party.  Here is the entire piece.

“The following two paragraphs were written about Graham in a lengthy New York Times profile over the weekend:

“He alone can fix the former president, he believes, and make him a unifying figure for Republicans to take back both houses of Congress next year and beyond. To that end, he says, he is determined to steer Mr. Trump away from a dangerous obsession with 2020.

“‘What I say to him is, ‘Do you want January the 6th to be your political obituary?’ he said. ‘Because if you don’t get over it, it’s going to be.'”

Lindsey Graham thinks he can “fix” Donald Trump, turning the former president from a narcissistic obsessive about nonexistent fraud in the 2020 election into a powerful force for good within the Republican Party.

There’s lots of reasons why Graham’s belief that he can fundamentally alter Trump is deeply misguided. Let’s go through them.

1) Trump remains totally focused on nonexistent election fraud: While the former president no longer has Twitter — he was permanently banned from the platform after his reaction to the January 6 riot at the US Capitol — he is still issuing a slew of statements every week via his “Save America” PAC. And the common theme in the majority of them is that the 2020 election was somehow stolen from him — and that the truth will emerge sometime soon.

“It is time for Joe Biden to resign in disgrace for what he has allowed to happen to Afghanistan, along with the tremendous surge in COVID, the Border catastrophe, the destruction of energy independence, and our crippled economy,” Trump said Sunday. “It shouldn’t be a big deal, because he wasn’t elected legitimately in the first place!”

“Why are RINOs standing in the way of a full Forensic Audit in Michigan?” Trump said late last week. “The voters are demanding it because they have no confidence in their elections after the Rigged 2020 Presidential Election Scam.”

Yeah, that totally seems like a guy who is ready to move on! He’s totally coming to terms with losing the 2020 election!

2) There is NO Trump 2.0: Remember when Trump promised — after it became clear he would be the Republican nominee in 2016 — that he would be “so presidential [that] you will be so bored. You’ll say, ‘Can’t he have a little more energy?'” How’s that promise looking with five years of hindsight?

The truth is — and always has been — that there is no pivot possible. There is not other gear that Trump can go to, some other side of his personality he hasn’t shown yet. He’s a 75-year-old man who has behaved the same way — boorishly, crudely and utterly without introspection — for his entire adult life. The idea that he will suddenly change — because Lindsey Graham told him to! — is beyond ridiculous.

3) Graham isn’t the boss of their relationship: Even if you discount the two points above — and you shouldn’t — there’s still no chance that Graham can bring his vision of Trump to fruition. Why? Because even by Graham’s own admission, he’s not that guy!

This, from the Times, is illuminating on that point:

“Mr. Graham, 66, has from his school days chosen to ally himself with protective figures he calls ‘alpha dogs,’ men more powerful than himself…

“…’To be part of a football team, you don’t have to be the quarterback, right?’ Mr. Graham said in the interview. ‘I mean, there’s a value in being part of something.'”

Sure! But the left guard doesn’t tell the quarterback what to do. Or suggest how the QB can change himself in order to be a better team player.

That Graham thinks he can change Trump, then, speaks to two things: His own towering sense of self-importance and his fundamental misreading of who Donald Trump is (and always has been). There is no “new” Trump waiting to be discovered by Graham (or anyone else). There’s just Trump. Take him or leave him.”

For those of us who live in New York, we have seen for decades the low character of Donald Trump.  For all his billions, his hotels, and his name in lights,  he was always regarded as a selfish, self-promoting boor.