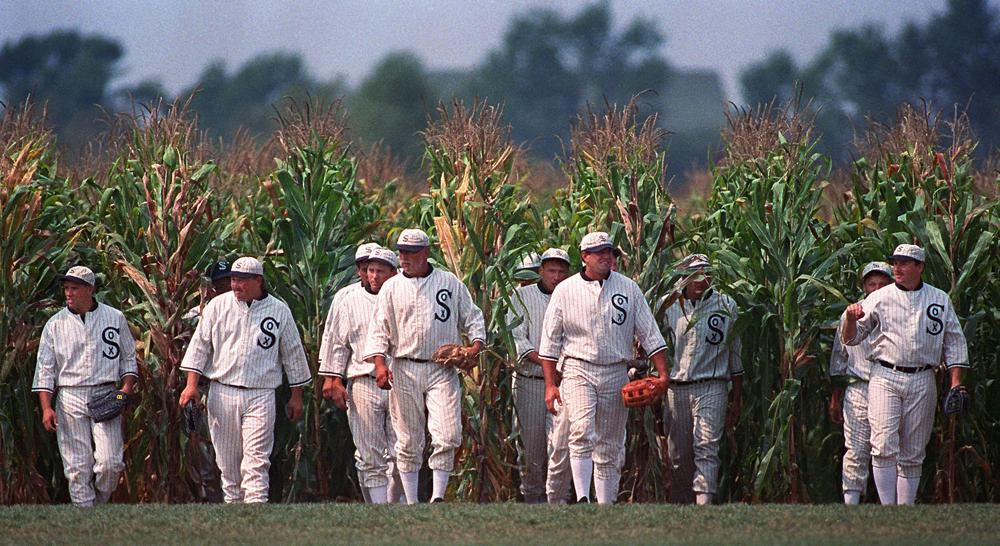 More than three decades after the movie “Field of Dreams” seeped into the country’s cultural consciousness, one of the most famous cornfields in Hollywood history finally gets the opportunity to host real major league ball.

“Is this heaven?” the ghost of John Kinsella asked in the movie that inspired the game to be played tonight between the Chicago White Sox and New York Yankees next to the actual site used in the 1989 film, which is maintained as a tourist attraction.

“No, it’s Iowa,” dutiful farmer Ray Kinsella — played by Kevin Costner — responded to his father with a smile before they played catch under the lights in the movie’s most poignant scene.

This week, the ball playing isn’t fiction.  As reported by AFP.

“Shoeless” Joe Jackson and other long-ago players who took the field in the movie will be replaced by José Abreu and Aaron Judge.

The proud and quintessential Midwestern state, usually only in the spotlight every four years during presidential campaigns, will be hosting a Major League Baseball game for the first time when the White Sox and Yankees play at a temporary venue built for about 8,000 fans in tiny Dyersville — population “about 4,400, we’re hoping for in the next census,” said mayor Jim Heavens.

The event, part of MLB’s increased effort to grow the game by setting up shop in places without in-person access to the highest level of the sport, has been in the works for years. The original plan to play in 2020 was postponed when the coronavirus forced a shortened schedule at mostly empty ballparks, but if the White Sox, the Yankees or the Iowans became impatient then they were out of step with the spirit of the film.

“The one constant through all the years,” as the sage author Terence Mann declared to Ray Kinsella in the film, “has been baseball.”

Dyersville found its place on the map through the movie that starred Costner, James Earl Jones, Ray Liotta and Amy Madigan, but the sport has been entrenched in the town for more than a century. Commercial Club Park is where the team from Beckman Catholic High School and the local semipro club play, a spot as much at the heart of the community as the well-kept farms around it.

About one-third of the crowd on Thursday is expected to be Iowa residents.

“I see a lot of people as I travel around the state, and when they find out you’re from Dyersville, they all know about this MLB game,” Heavens said. “I think there’s a real element of pride in Iowa that MLB is coming. It’s kind of warmed my heart to see that the people of Iowa are so honored that this is happening.”

The original movie site was quickly deemed too small for a standard game, so the made-for-the-moment ballpark required removal of 30,000 cubic yards of material and the installation of 4,000 tons of sand and 2,000 tons of gravel. The bullpens were designed to mimic those at old Comiskey Park, the former home of the White Sox. There’s even a just-for-fun corn maze beyond right field.

This has been an especially hot and dry summer in this part of the country, so an irrigation system was installed to keep the prime crop in good shape for its time to shine on national TV — between 10 and 12 feet high.

“We wanted to make sure we didn’t show up in the middle of August with brown corn,” said Chris Marinak, MLB’s chief operations and strategy officer.

Just about everything about this event is unique.

“When we first heard that this game would happen, I think everybody had that kind of initial rush of ‘Oh, this is going to be amazing to be a part of this broadcast,’” said Brad Zager, executive vice president of production and operations for Fox Sports. “When you start looking at it, there are very few events that we get a chance to produce that there’s no blueprint for.”

Both teams will wear throwback uniforms harkening back to 1919, when Jackson played for the White Sox and was one of eight players banned for fixing the World Series. The history of that team is one of the many themes woven into a film that transcends sports.

The White Sox and Yankees were also the two favorite teams of the  Kinsella character in the movie, at different points of his life.

This sounds like a fun game to watch this evening!