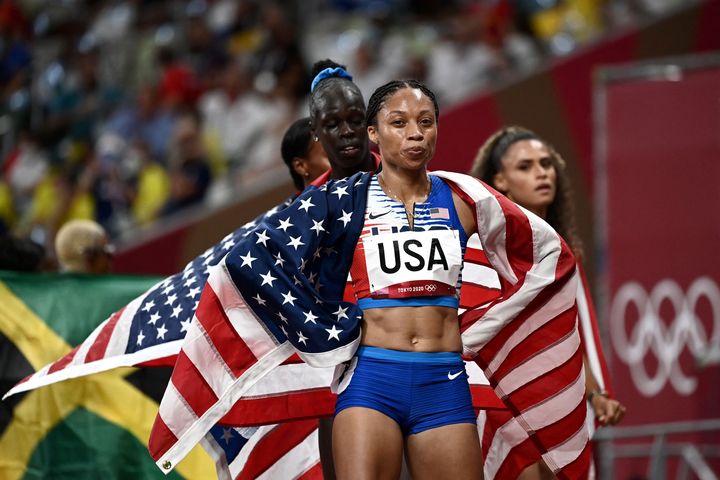 “I just came out really at peace, and wanting to soak it all in,” Felix said. “Obviously complete confidence in this team. I think this is a really special team because we’re not 400-meter runners — I don’t consider myself a 400 specialist, we all do different things and it was really cool to come together and to get to close out the Olympic Games and for me, my Olympic career in this way.”

The talent and star power of the U.S. quartet was nearly unprecedented. Felix received the baton from 400 hurdles world record holder and gold medalist Sydney McLaughlin and handed off to Dalilah Muhammad, who had the 400 hurdles world record before McLaughlin and won the silver medal here. The anchor was 19-year-old Athing Mu, who won the 800 gold and in June had the fastest 400 leg in NCAA history, 48.85 seconds.

“It’s an amazing group of women right here,” McLaughlin said. “Once in a lifetime opportunity, so I think we all just knew going in it was going to be fast and just have fun with it.”

“I was just honored,” Muhammad said of the chance to be part of Felix’s last Olympic race. “Of course [Felix] earned it, but she’s so deserving of it too and so definitely inspired by her throughout my entire career and I’m truly just honored to have been part of this team with her. I think we’re going to look back at this and think about how special this moment really was.”

It was the seventh straight Olympics the U.S. women have won the 4×400. Felix was a member of each of the last four, though she acknowledged that her role was different this time — where in the past she would have been one of the legs counted on to be fastest and really pull the team to a win, this time she saw herself as the veteran bringing experience.

The relay gold capped a stellar showing for the women of U.S. track and field. Of the 26 medals won by Americans during the meet, 15 were thanks to women, including five of the seven golds the U.S. claimed.

“I think it was awesome,” Felix said. “I think the women showed up; I think we’ve been showing up on the track, off the track, in all of the ways. To me, I loved it. I love seeing it.

“Sitting back and watching each woman perform, it was inspiring. It was like, ‘OK, who’s next?’ and it was kind of like a buzz.”

Standing on the podium, Felix said she closed her eyes and took a moment to take it all in.

“To be surrounded by these women in that moment was really special,” she said.

While Felix repeatedly said this was her last Olympics, when asked if it’s possible to see the same four women team up next year at the World Championships, which are being held in the United States for the first time, she didn’t say no. Instead, she said, “We’ll see.”

A champion for the ages!