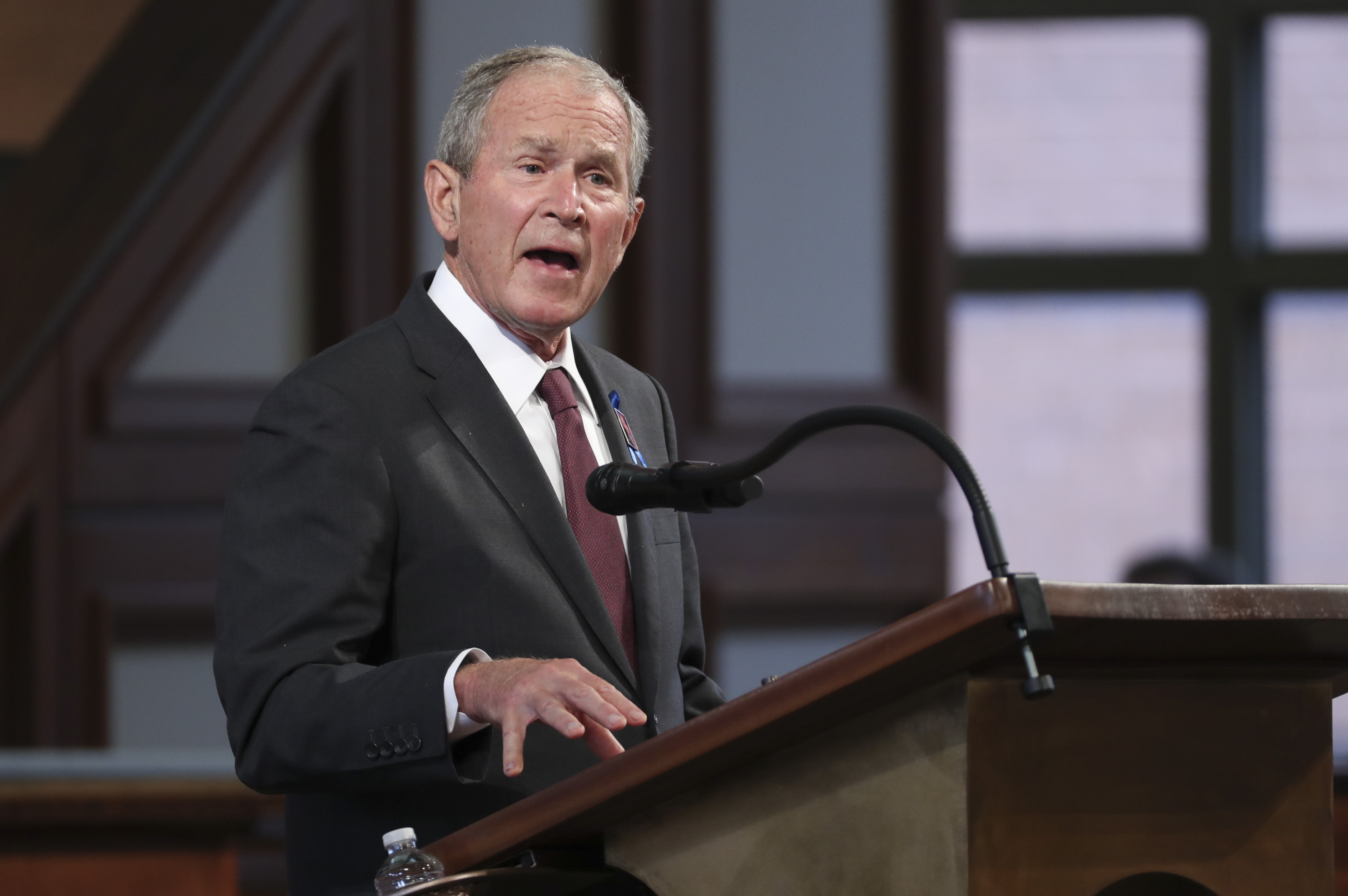 James Harding, former director of BBC News and editor of The Times newspaper in London, has a guest essay in today’s New York Times, recommending that President Joe Biden seek the help of former President George W. Bush to promote COVID-10 vaccination. While focused mostly on the international front, Harding makes the point that “Mr. Bush could mount a challenge to the anti-vax right that’s stoking vaccine hesitancy around the world. He could marshal some leaders in his party — Senator John Kennedy of Louisiana, an advocate of U.S. leadership on the global vaccine rollout, for example — to this cause and demonstrate that Americans, Republican or Democrat, can side with the science.”

I think Harding makes a good suggestion that Biden should seriously consider.

Below is the entire essay.

The World Needs a Heavy Hitter on the Pandemic.

The Biden administration says it wants to end the pandemic in 2022. If it’s serious about that goal, President Biden should relieve George W. Bush of his paintbrush and easel and draft him as America’s vaccine envoy.

The world remembers W. for Iraq. But Mr. Bush was also the first global health president. Millions of people know that they owe their lives, and the lives of loved ones, to PEPFAR — the U.S. President’s Emergency Plan for AIDS Relief — the effort led by the Bush White House to try to end the H.I.V./AIDS pandemic in Africa and around the world.

The global fight against Covid-19 is a race between vaccines and variants. It’s a race we are losing. Mr. Biden, singularly, has the authority to turn things around. But given that Covid is consuming the administration domestically, he will need a representative who, around the world, cannot be ignored. He needs someone who can use the bully pulpit and back-room pressure to get world leaders, pharmaceutical leaders and health agencies to urgently accelerate the funding, delivery and distribution of vaccines.

At its meeting in England last month, the Group of 7 overpromised and underdelivered on Covid. Prime Minister Boris Johnson of Britain, who had said that he wanted to unite world leaders in committing to vaccinate the world by the end of 2022, announced one billion additional vaccine doses. As of mid-June, the number of truly new doses was closer to 600 million. The World Health Organization estimates that the world needs 11 billion vaccine doses.

At the rate of vaccination in early June, the world won’t be vaccinated for many years. Things look set to speed up when the wealthy West has had its jabs, but even then, the optimistic estimates currently have the program of global Covid-19 vaccinations complete in 2023 or 2024. The more people we leave unvaccinated, the more time we give the pathogen to mutate into a variant that’s more transmissible than Delta or Alpha. And yet, we seem to be mouthing the words, “No one is safe until everyone is safe,” even as a third wave crashes over parts of Africa and Covid’s infectious new variants wash back on the shores of wealthy countries.

When people in those countries are no longer dying, we too often forget about the rest elsewhere. The shameful history of pandemics tells us as much. It was true for tuberculosis. True, too, for AIDS: long after H.I.V. stopped being a death sentence for the West’s citizens, AIDS-related illnesses kept killing millions around the world.

PEPFAR didn’t end AIDS, but in more than 50 countries around the world, it brought the crisis under control. Since Mr. Bush started PEPFAR in 2003, it has invested more than $85 billion in AIDS treatment, prevention and research; it has saved, at a conservative estimate, 20 million lives. It was the Marshall Plan of modern health care, the largest ever commitment to combat a single disease globally.

Many countries are looking to Mr. Biden for the sequel. Like AIDS treatment for whoever needed it, the case for a global Covid-19 vaccine program is a moral one. But there’s also a self-interested argument for America to play the leading role, too: An international vaccine program is an investment in the U.S. economy, an act of national security and a good bet on individual good health.

Everyone knows what needs to be done. Everyone is waiting for someone else to do it. To turn this diplomatic game of hot potato into an effective program, and if the United States is going to lead the global vaccine rollout, rather than allow China to take that role, the Biden administration will need a high-profile emissary.

Former President Bush fits the bill. He’s publicly committed to vaccines: “Roll up your sleeve and do your part,” Mr. Bush said in a public service announcement alongside Presidents Jimmy Carter, Bill Clinton and Barack Obama in March. He identifies, personally, with America’s efforts to save lives globally: I interviewed him after he left the White House and it was clear that he saw PEPFAR as one of the things that defined him and his presidency. It sounded self-serving, of course, but he rightly owns it.

As a presidential candidate, he seized on the idea when Condoleezza Rice first briefed him on U.S. policy priorities in Africa. In the 2003 State of the Union address, before he warmed to his theme of the war on terrorism and Iraq, Mr. Bush cataloged the course of the AIDS pandemic, the deaths in Africa and announced his plan for AIDS relief, saying, “This nation can lead the world in sparing innocent people from a plague of nature.” Mr. Bush convened, cajoled and co-opted a bipartisan U.S. coalition and an international, multifaceted effort behind PEPFAR. He’d be more than an ex-president doing the rounds of the world’s capitals; he has credentials on global health.

It’s true that Mr. Bush and Mr. Biden are hardly kindred spirits. It’s become clear that 43 doesn’t like the U.S. withdrawal from Afghanistan, 46’s biggest foreign policy decision to date, and Mr. Biden might be wary of bringing the architect of the Iraq war back onto the global stage.

But Mr. Bush could mount a challenge to the anti-vax right that’s stoking vaccine hesitancy around the world. He could marshal some leaders in his party — Senator John Kennedy of Louisiana, an advocate of U.S. leadership on the global vaccine rollout, for example — to this cause and demonstrate that Americans, Republican or Democrat, can side with the science.

People liked to say that Mr. Bush was pretty good at taking it easy when he was in office; since then, he’s made an art of it. He seems to like retirement.

But the global vaccine effort is a prime opportunity for Mr. Biden to restore U.S. leadership on the world stage. The president needs someone who can help convene a special U.S.-led summit on vaccine supply and distribution globally, amplify the international effort that Gayle Smith is orchestrating at the State Department and go to work on other world leaders, the Group of 7 and, particularly, the Group of 20, to fund and deliver. The administration needs someone who can get the pharmaceutical companies to earmark supplies now for the poorest countries in the world. And it needs someone who can speak to heads of government around the world to ensure that through the course of 2022, when the vaccines do arrive, they go into arms, not warehouses.

We are, globally, nearer to the beginning than to the end of this pandemic. We are on course to see more people die and more people incapacitated by illness. And if we keep giving the virus time to mutate, it can keep revisiting us, destroying lives and livelihoods. We’re in an arms race. Mr. Biden should continue a great American tradition of calling ex-presidents back into service for a crucial cause, and draft Mr. Bush for another necessary fight against a pandemic.