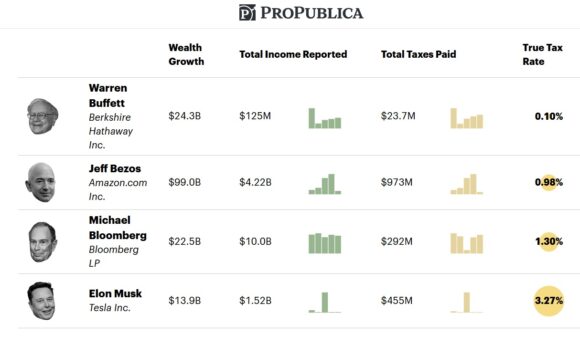 Maureen Dowd goes after  billionaires like Jeff Bezos and Elon Musk who pay little or no income taxes in her New York Times column this morning.  Entitled, Fat Cats on a Hot Tin Roof, she cites ProPublica’s “cracking open the vault on America’s biggest tax grifters” and revealing how the Midas men dip, dodge and duck, paying pennies on the dollar, if that, while we suckers have to pony up.  She comments: “Given what this country has been through with Covid, given all the corrupt bankers who got off scot-free after the economic collapse, and given how hard it is to earn a buck, this new glimpse into inequities is genuinely disgusting.”  She concludes:  “The richest of the rich want unspeakably high gains with unspeakably low costs. It may not be against the law but it certainly isn’t right.”

Her entire column is below!

WASHINGTON — I find this all quite taxing.

Infrastructure talks just collapsed, with Republicans scratching their heads, wondering where on earth we could find the money to save our cratering bridges and highways, among other things. This was the same crowd who happily helped Donald Trump slash tax rates for corporations and the ultrawealthy in 2017.

Meanwhile, ProPublica cracked open the vault on America’s biggest tax grifters, revealing how the Midas men dip, dodge and duck, paying pennies on the dollar, if that, while we suckers have to pony up.

“In 2007, Jeff Bezos, then a multibillionaire and now the world’s richest man, did not pay a penny in federal income taxes,” ProPublica reported. “He achieved the feat again in 2011. In 2018, Tesla founder Elon Musk, the second-richest person in the world, also paid no federal income taxes.

“Michael Bloomberg managed to do the same in recent years. Billionaire investor Carl Icahn did it twice. George Soros paid no federal income tax three years in a row.”

Grandfatherly shark Warren Buffett — who famously tut-tutted that his secretary paid a higher tax rate than he did — topped the list, among the 25 richest Americans, for avoiding the most taxes.

“Taken together,” ProPublica concluded, “it demolishes the cornerstone myth of the American tax system: that everyone pays their fair share and the richest Americans pay the most. The I.R.S. records show that the wealthiest can — perfectly legally — pay income taxes that are only a tiny fraction of the hundreds of millions, if not billions, their fortunes grow each year.”

It turns out Donald Trump was the canary in the gold mine. While everyone was outraged about the first modern president who refused to show his tax returns, real billionaires were skating.

Senator Patrick Toomey, Republican of Pennsylvania, who was one of the architects of the law that cut taxes by more than a trillion dollars, defended tax rates for “high income people” at a town hall, but in an interview with The Times sounded a more critical note.

“My intention as the author of the 2017 tax reform was not that multibillionaires ought to pay no taxes,” he said. “I believe dividends and capital gains should be taxed at a lower rate, but certainly not zero.”

Senator Ron Wyden, an Oregon Democrat and the chairman of the Finance Committee, said he was working on a bunch of proposals to force billionaires to pay their fair share, including some sort of minimum tax.

The Times story noted that ProPublica shed light on the fact that “the superrich earn virtually all their wealth from the constantly rising value of their assets, particularly in the stock market, and that the sales of those assets are taxed at a lower rate than ordinary income from a paycheck.” And while the value of those assets grows by the billion, untaxed, these rich folks can borrow against them, deducting the interest.

The revelations may renew calls for the wealth tax that Elizabeth Warren and Bernie Sanders have long pushed. In 2019, during a campaign debate, Sanders lamented the outrageous fact that three people own more wealth in America than the bottom half of society, and he railed against the “billionaire class whose greed and corruption has been at war with the working families in this country for 45 years.”

So the secret I.R.S. cache did not surprise him. “The rich have money, the rich have power, the rich have lobbyists, and the rich do not pay their fair share of taxes,” he said in a peak-Bernie moment.

Republicans talk a good game about adopting the winning parts of Trumpism, but you can’t be populists if you shield the rich and stick it to everybody else.

Even if they make the rich pay their fair share, it likely won’t be enough to fund most of what President Biden needs to do. They’ll have to raise the corporate tax rate, which began to plunge during the Reagan years, to an equitable level and stop corporations from tax-shopping to find countries with the lowest rates.

Look, rolling around in gobs of dough and displays of obscene consumption is a tradition as American as apple pie. But, Up to a point, Lord Copper. Forgive me if I don’t want to celebrate Jeff Bezos’ midlife crisis rocket ride.

Given what this country has been through with Covid, given all the corrupt bankers who got off scot-free after the economic collapse, and given how hard it is to earn a buck, this new glimpse into inequities is genuinely disgusting. Paging Madame Defarge: Where do you get your knitting needles?

Paying taxes is an expression of citizenship. You can’t belong to the club and not pay your dues.

You shouldn’t come into the world with the ambition to pay no taxes. Paying more taxes should be a sign that you made more money — and good for you. We don’t want to ding you for succeeding but we’re halfway to a plutocracy here.

The richest of the rich want unspeakably high gains with unspeakably low costs. It may not be against the law but it certainly isn’t right. It’s tacky.

Show some public spirit, Monopoly Men! Do not pass Go. Do not collect $200