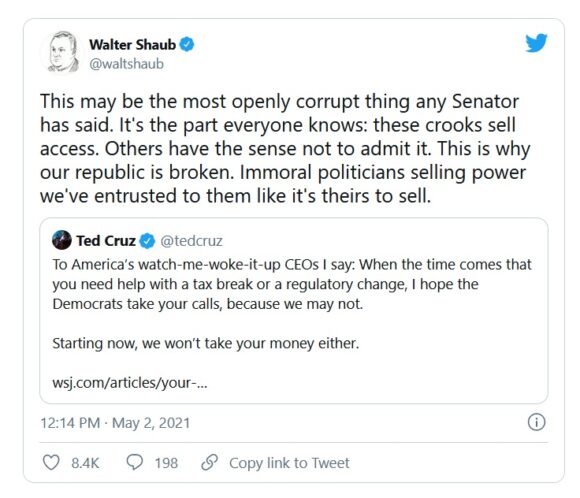 Sen. Ted Cruz’s (R-Texas) threat to “woke” CEOs was slammed yesterday as likely the “most openly corrupt” message ever from the Senate, wrote Walter Shaub, former head of the Government Office of Ethics.

In a Wall Street Journal column last week, Cruz warned that CEOs opposing Republican threats to voting rights will be excluded from his party’s pay-to-play legislative operation — because they’re no longer conservative enough for the GOP.

For example, Republicans will stop accepting donations in exchange for “looking the other way” when corporate bigwigs dodge taxes, Cruz wrote in a stunningly honest admission of his party’s current modus operandi.

“This time,” he wrote, “we won’t look the other way on Coca-Cola’s $12 billion in back taxes owed. This time, when Major League Baseball lobbies to preserve its multibillion-dollar antitrust exception, we’ll say no thank you. This time, when Boeing asks for billions in corporate welfare, we’ll simply let the Export-Import Bank expire.”

Shaub, who served under both Barack Obama and Donald Trump, called Cruz’s threat a blatant admission that Republicans are selling corporate donors “access to the government.” In a clear swipe at Cruz’s clueless self-exposure, Shaub noted that most lawmakers have too much “sense” to say it quite so brazenly.

“It’s the part everyone knows: these crooks sell access,” Shaub tweeted. “Others have the sense not to admit it. This is why our republic is broken: Immoral politicians selling power we’ve entrusted to them like it’s theirs to sell.”

Many others agreed, with one Twitter critic informing the Texas senator: “Announcing you will no longer take bribes isn’t the defense you think it is.”

Cruz is the dumbest corrupt politician in the Senate and is not afraid to demonstrate it!