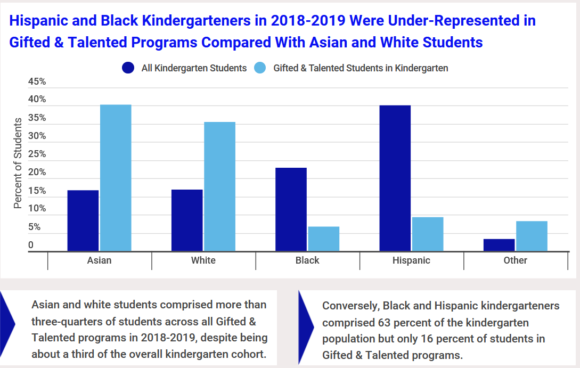 New York City’s Independent Budget Office has a brief report entitled, Were Black and Hispanic Kindergarteners Under-Represented and Racially Segregated in Gifted & Talented Programs in 2018-2019?  It presents stark numbers that illustrate the disparity in access to these programs among major groups in the City.  The chart above says it all.  Here is an excerpt from the study.

“The under-representation of Black and Hispanic students in Gifted & Talented programs in New York City public schools has been well documented. Admission to the programs had been based on a competitive test, but for next school year the Department of Education will use a lottery to select kindergarten students from among those recommended by their pre-k teachers or whose parents signed their children up for interviews. The education department has also said it will not use entrance exams for 4-year-olds in the future. A recently filed lawsuit charges the city’s admission processes for Gifted & Talented programs and selective schools worsens racial inequality in the school system…

Something has to be done!