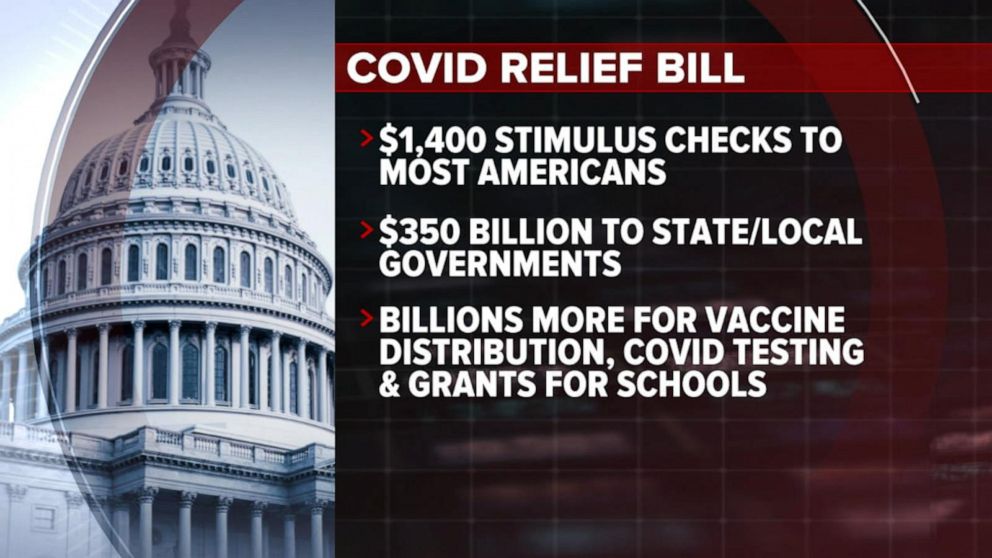 Yesterday, the US Senate passed a version of the Joe Biden COVID-19 relief package containing nearly $2 trillion in benefits. The bill passed on a strictly party line vote.  As reported by Yahoo and other news media.

Senate Democrats used the process of budget reconciliation to pass the bill with just 50 votes, circumventing the legislative filibuster that would have required ten Republicans to sign on as well. Democrats in Congress had set March 14 as the deadline for delivering the bill for Biden’s signature, the date when expanded unemployment benefits for millions of Americans are set to expire.

Despite some changes to the bill from the House version that infuriated progressives, it is expected to pass before reaching Biden’s desk. Vice President Kamala Harris did not have to cast the tie-breaking vote, as Alaska Republican Sen. Dan Sullivan was absent to attend a family funeral.

“The American Rescue Plan will go down as one of the most sweeping federal recovery efforts in history,” Senate Majority Leader Chuck Schumer, D-N.Y., said shortly before final passage, adding that he wanted the American people to know “help is on the way. That their government is going to give them one final push to get us over the finish line.”

After voting on amendments began late Friday morning, the process was delayed for hours over a disagreement on federal unemployment insurance benefits after Sen. Joe Manchin, D-W.V., pushed to decrease both the size of the weekly payments and how long they lasted. Eventually, Democrats settled on a plan that would extend the $300 per week benefits through Sept. 6 while providing tax relief on the first $10,200 in unemployment benefits for households making up to $150,000. There are concerns about the expanded benefits drying up with Congress in August recess and unable to extend them.

Manchin’s maneuvering flummoxed both fellow moderates in his caucus and the other half of the West Virginia Senate delegation.

“I don’t know,” said Sen. Jon Tester, D-Mt., when asked by Politico what Manchin’s issue was. “I really don’t.”

“I have no idea what he’s doing, to be quite frank,” said Sen. Shelley Moore Capito, R-W.Va. “Maybe you can tell me.”

Manchin had previously expressed concerns that extending benefits for too long would discourage people from returning to work as the economy reopened.  A study from Yale economists released last year found the benefits to not be a hindrance on returning to work. The economy added 379,000 jobs in February but there are still nearly 10 million fewer jobs than there were a year ago prior to the pandemic hitting.

“The president supports the compromise agreement, and is grateful to all the senators who worked so hard to reach this outcome,” White House press secretary Jen Psaki said in a statement. “It extends supplemental unemployment benefit into September, and helps the vast majority of unemployment insurance recipients avoid unanticipated tax bills. Most importantly, this agreement allows us to move forward on the urgently needed American Rescue Plan.”

Another change from the House bill was a reduction in the number of Americans receiving stimulus payments after they tightened income thresholds which was agreed to by the White House on Wednesday. Under the new plan, about 17 million fewer Americans will receive the checks than did under the previous guidelines, saving roughly $12 billion, .006 percent of the nearly $2 trillion package.

One provision that was stripped fully from the House bill was an increase of the federal minimum wage from $7.25 to $15. The White House declined to overrule the Senate parliamentarian’s guidance saying the increase didn’t qualify, but passage was unlikely unless Manchin and Sen. Kyrsten Sinema, D-Ariz., — who had opposed the measure — changed positions. Sen. Bernie Sanders, D-Vt., attempted to include the increased minimum wage in the bill anyway, but the procedural vote failed, with eight Democrats voting against (Sens. Sinema, Manchin, Tester, Angus King of Maine, Jeanne Shaheen and Maggie Hassan of New Hampshire, and Tom Carper and Chris Coons of Delaware).

Sinema drew particular ire for the exaggerated thumbs down she gave when voting no on a raise for millions of Americans, with one progressive group launching a radio ad hours after her vote. A spokesperson for the first-term Arizona Democrat called commentary on her actions “sexist.”

The bill contains funding for vaccine distribution, schools, nutrition assistance and rent relief, in addition to a temporary childhood allowance and a provision to lower Affordable Care Act premiums for some Americans.There is also $350 billion for state and local governments, a key sticking point in Republican opposition.

Democrats voted down a number of Republican amendments over the course of the “vote-a-rama,” including provisions that would have severely reduced the size of the package, cut the state and local funding, redistributed Amtrak funding to the Coast Guard and tied money for schools to reopening. GOP-proposed amendments on abortion, immigration and transgender sports participation also failed. Late Saturday morning, a bipartisan amendment proposed by Sen. Lisa Murkowski, R-Alas., that redirected some of the funding for schools to homeless children passed with bipartisan support.

An amendment supported by Manchin, Tester and the GOP that would have overturned an executive order to cancel the Keystone Pipeline failed to reach the 60 votes needed to override the budget rules.

Biden held meetings with Republicans but said from the beginning he would not delay the bill or drastically cut its size for the sake of earning their votes, citing his experience working on a stimulus bill as vice president in 2009. A group of GOP senators proposed legislation that was a third of the size of the American Rescue Plan but it never gained traction.

“The way I see it, the biggest risk is not going too big, it’s if we go too small,”Biden said last month. “We’ve been here before. When this nation hit the Great Recession that Barack and I inherited in 2009, I was asked to lead the effort on the economic recovery act to get it passed. It was a big recovery package, roughly $800 billion. I did everything I could to get it passed, including getting three Republicans to change their votes and vote for it. But it wasn’t enough. It wasn’t quite big enough. It stemmed the crisis, but the recovery could have been faster and even bigger. Today we need an answer that meets the challenge of this crisis, not one that falls short.”

White House messaging on the bill has been to declare it bipartisan due to its popularity in polling among Democrats, Republicans and independents alike, even as it garnered zero GOP votes in Congress. The Biden administration has also courted support from Republican governors and mayors.

Congratulations to President Biden and the Democrats!