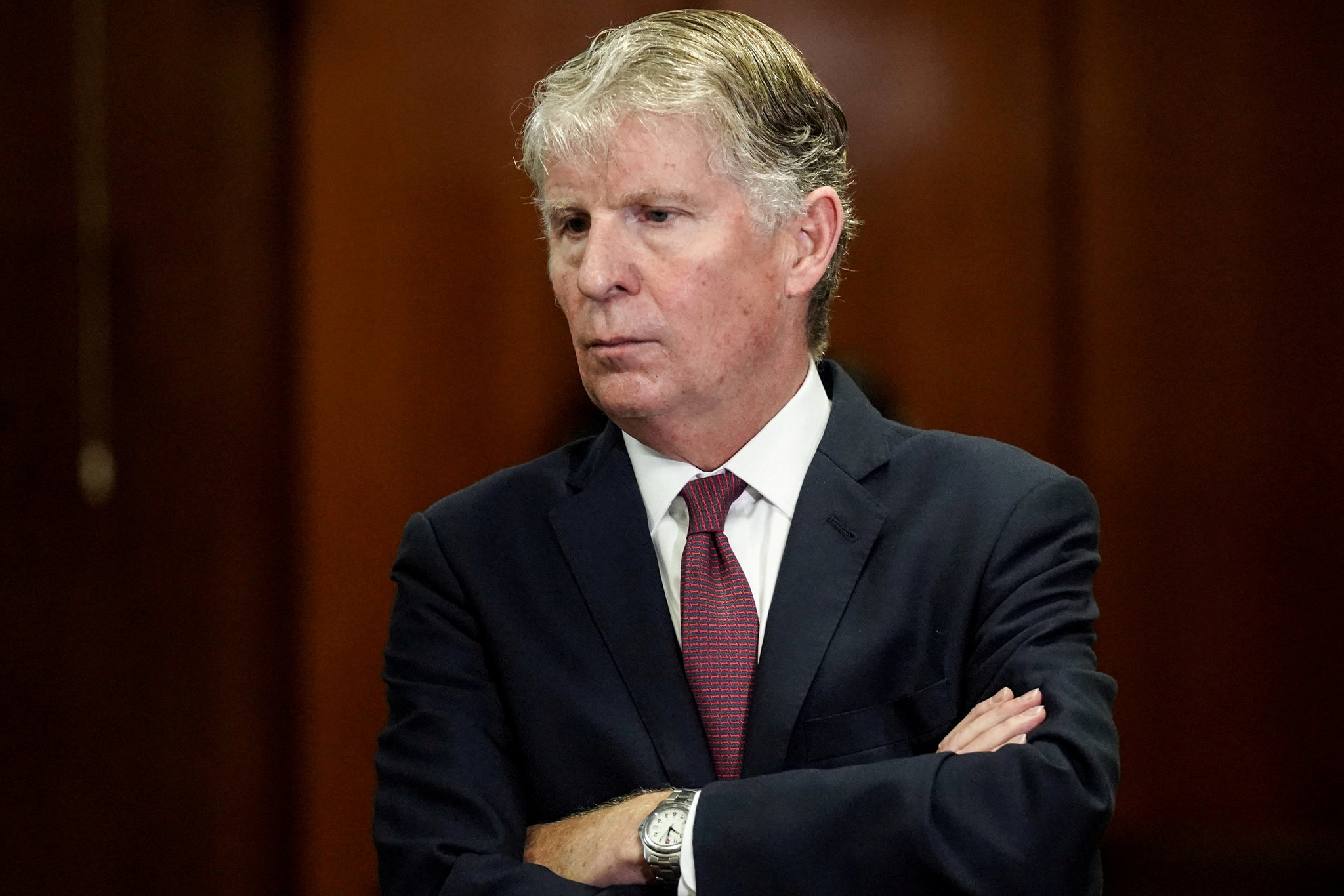 Yesterday, the U.S. Supreme Court issued a ruling that paves the way for prosecutors in New York to begin combing through Mr. Trump’s financial records.  This was a blow to Trump and his business organization.  The New York Times has an article this morning laying out what the Supreme Court ruling means to the investigation.  Here in New York, district attorney, Cyrus R. Vance Jr. is generally considered as someone not to mess with.  Below is the entire article.

This sounds like a lots of trouble for Trump!

Here’s What’s Next in the Trump Taxes Investigation

Terabytes of data. Dozens of prosecutors, investigators and forensic accountants sifting through millions of pages of financial documents. An outside consulting firm drilling down on the arcana of commercial real estate and tax strategies.

That is the monumental task that lies ahead in the Manhattan district attorney’s criminal investigation into former President Donald J. Trump and his family business after a United States Supreme Court order on Monday cleared the way for prosecutors to obtain eight years worth of Mr. Trump’s tax returns and other financial records.

The brief, unsigned order was a resounding victory for the prosecutors and defeat for Mr. Trump, capping his bitter and protracted legal battle to block the release of the records — an effort that twice reached the Supreme Court — and delivering a jolt to the prosecutors’ efforts after the lawsuit stalled them for more than a year.

The investigation is one of two known criminal inquiries into Mr. Trump, the other coming from prosecutors in Georgia scrutinizing Mr. Trump’s effort to persuade local officials to undo the election results there. When Mr. Trump left office, he lost the protection against indictment that the presidency afforded him.

The district attorney, Cyrus R. Vance Jr., issued a terse statement, saying: “The work continues.” A spokesman for his office declined to comment further on the investigation.

The crucial next phase in the Manhattan inquiry will begin in earnest this week when investigators for the district attorney’s office collect the records from the law firm that represents Mr. Trump’s accountants, Mazars USA, according to people with knowledge of the matter, as well as former prosecutors and other experts who described the next steps on the condition of anonymity.

The investigators, carrying a copy of the August 2019 grand jury subpoena that was at the heart of the lawsuit, will go to the law firm’s office in New York’s Westchester County. They will leave with a vast trove of digital copies of the returns, reams of financial statements and other records and communications relating to Mr. Trump’s taxes and those of his businesses.

Then, the investigators will deliver the mass of data to the office of Mr. Vance, where the team of prosecutors, forensic accountants and analysts have been investigating Mr. Trump and his companies for a wide range of possible financial crimes. Mr. Vance, a Democrat, has been examining whether Mr. Trump, his company and its employees committed insurance, tax and banking fraud, among other crimes, people with knowledge of the matter have said.

Even before the Supreme Court ruling, the investigation had heated up, with Mr. Vance’s office issuing more than a dozen subpoenas in recent months and interviewing witnesses, including employees of Deutsche Bank, one of Mr. Trump’s top lenders.

The subpoenas relate to a central aspect of Mr. Vance’s inquiry, which focuses on whether Mr. Trump’s company, the Trump Organization, inflated the value of some of his signature properties to obtain the best possible loans, while lowballing the values to reduce property taxes, people with knowledge of the matter have said. The prosecutors are also examining the Trump Organization’s statements to insurance companies about the value of various assets.

Now armed with the records from Mazars — including the tax returns, the business records on which they are based and communications between the Trump Organization and its accountants — prosecutors will be able to see a fuller picture of potential discrepancies between what the company told its lenders and tax authorities.

The prosecutors have also subpoenaed the Trump Organization for records related to tax write-offs on millions of dollars in consulting fees, some of which appear to have gone to the president’s elder daughter, Ivanka Trump, an arrangement first reported by The New York Times. The company turned over some of those records last month, two people with knowledge of the matter said, though the prosecutors have questioned whether the company has fully responded to the subpoena.

It remains unclear whether the prosecutors will ultimately file charges against Mr. Trump, the company, or any of its executives, including Mr. Trump’s two adult sons, Donald Trump Jr. and Eric Trump.

In a lengthy and angry statement that included a reiteration of many of his familiar grievances, Mr. Trump lashed out at the Supreme Court and the investigation, which he characterized as “a continuation of the greatest political Witch Hunt in the history of our Country.”

He added: “For more than two years, New York City has been looking at almost every transaction I’ve ever done, including seeking tax returns which were done by among the biggest and most prestigious law and accounting firms in the U.S.”

Mr. Trump’s lawyers are likely to argue to prosecutors that Mr. Trump could not have duped Deutsche Bank because the bank, a sophisticated financial player, conducted its own analysis of Mr. Trump’s properties.

Mazars said in a statement that it was aware of the new ruling. “As we have maintained throughout this process, Mazars remains committed to fulfilling all of our professional and legal obligations,” the statement said.

The biggest challenge for Mr. Vance’s prosecutors will be to piece together the jigsaw puzzle of tax records, financial statements and the supporting documents Mr. Trump’s companies provided to the accountants.

For additional help, Mr. Vance’s office has hired FTI, a large consulting company that can analyze some of the industries in which Mr. Trump’s companies operate, including commercial real estate, as well as tax issues, people with knowledge of the matter said.

The firm will also load the trove of records into a data analysis and document management system that it can use to explore them and seek patterns in support of the investigation, the people said.

The action by the Supreme Court justices, who without noted dissent denied Mr. Trump an emergency stay so the court could fully review issues in the case for a second time, will not put Mr. Trump’s tax returns in the hands of Congress or make them automatically public. Grand jury secrecy laws will keep the records private unless Mr. Vance’s office files charges and enters the documents into evidence at a trial.

The public has already learned a great deal about Mr. Trump’s taxes through other means.

The New York Times obtained tax-return data extending over more than two decades for Mr. Trump and the hundreds of companies that make up his business organization, including detailed information from his first two years in office.

The Times published a series of investigative articles last year based on an analysis of the data showing that Mr. Trump paid virtually no income tax for many years and that he is currently under an audit in which an adverse ruling could cost him more than $100 million. He and his companies file separate tax returns and employ complicated and sometimes aggressive tax strategies, the investigation found.

But the Supreme Court’s action set in motion a series of events that could lead to the extraordinary possibility of a criminal trial for former president. At a minimum, the ruling wrests from Mr. Trump control of his most closely held financial records and the power to decide when, if ever, they would be made available for public inspection.

Mr. Trump and his lawyers have long fought to keep the records secret. After promising during the 2016 campaign that he would release his tax returns, as every presidential candidate has done for at least 40 years, he refused to do so, providing a persistent line of criticism for Democrats and other adversaries.

In addition to fighting the subpoena from Mr. Vance’s office in court, Mr. Trump sued to block the congressional subpoena and successfully challenged a California law requiring presidential primary candidates to release their returns.

The Supreme Court’s ruling comes nearly 18 months after Mr. Trump first sued Mr. Vance, seeking to block the subpoena from his office and spurring a legal battle that reached the Supreme Court for the first time last summer. In a landmark decision in July, the court rejected Mr. Trump’s argument that as a sitting president, he was immune from investigation. The case was argued by Mr. Vance’s general counsel, Carey Dunne, who is helping lead the investigation.

But the court said Mr. Trump could challenge the subpoena on other grounds, such as its relevance and scope. Mr. Trump then launched a new legal fight, arguing that the subpoena was overly broad and amounted to political harassment. After losing that argument in the lower courts, Mr. Trump asked the Supreme Court to delay enforcement of Mr. Vance’s subpoena until it could decide whether to hear Mr. Trump’s appeal.

It was that request that the Supreme Court denied, effectively ending the former president’s legal quest, legal experts said.

“Trump will not be given deference as a former president,” said Anne Milgram, a former assistant district attorney in Manhattan who later served as New Jersey’s attorney general. “Under the eyes of the laws of the state of New York, he has the same rights as others in the state. Neither more nor less.”

Reed Brodsky, a longtime white-collar defense lawyer and former federal prosecutor, said that Mr. Trump’s lawyers will likely tell him that further attempts to block the subpoena could undermine their ability to argue the merits of his defense.

“They’re at risk, if they continue to make arguments that are frivolous, of undercutting their credibility,” Mr. Brodsky said.