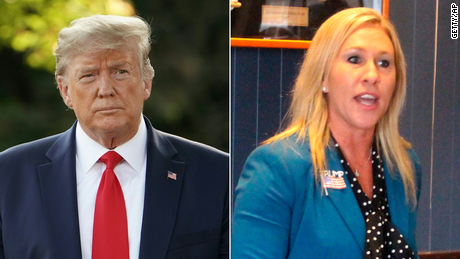 Conservative columnist Max Boot yesterday reminded the Republicans who are now getting “into a lather” about conspiracy theory-spouting Rep. Marjorie Taylor Greene (R.-Ga.) of their support and enabling of former President Donald Trump, which he said they “seem to have instantly forgotten.”

“They spent the past four years tolerating and even supporting ‘loony lies and conspiracy theories’ emanating not from a powerless House newcomer but from the most powerful man on the planet,” Boot wrote in his latest column for The Washington Post.

“Greene might be marginally kookier than former president Donald Trump — but only marginally,” the pundit said, noting how Trump’s “whole political career was defined by his advocacy of insane conspiracy theories.”

Boot recalled just some of Trump’s many, many “loony lies” — from his baseless birther conspiracy theory about former President Barack Obama to his false claim that the 2020 election was stolen from him, which led to the deadly attack on the U.S. Capitol by a mob of his supporters on Jan. 6.

Greene, meanwhile, faces censure in Congress over her support for the unhinged QAnon movement and her claims that mass school shootings were “false flags” and the 9/11 terror attacks were an inside job. The House will vote today over her removal from her committees.

Senate Minority Leader Mitch McConnell (R-Ky.) this week said that Greene’s support for conspiracy theories was a “cancer” on the GOP.

“Yes, Marjorie Taylor Greene is awful. But Trump — who called Greene a “real WINNER” and, according to Greene, recently called to offer her support — is far worse,” Boot concluded. “As long as Trump remains a force within the GOP, the cancer afflicting the party will continue to metastasize.”