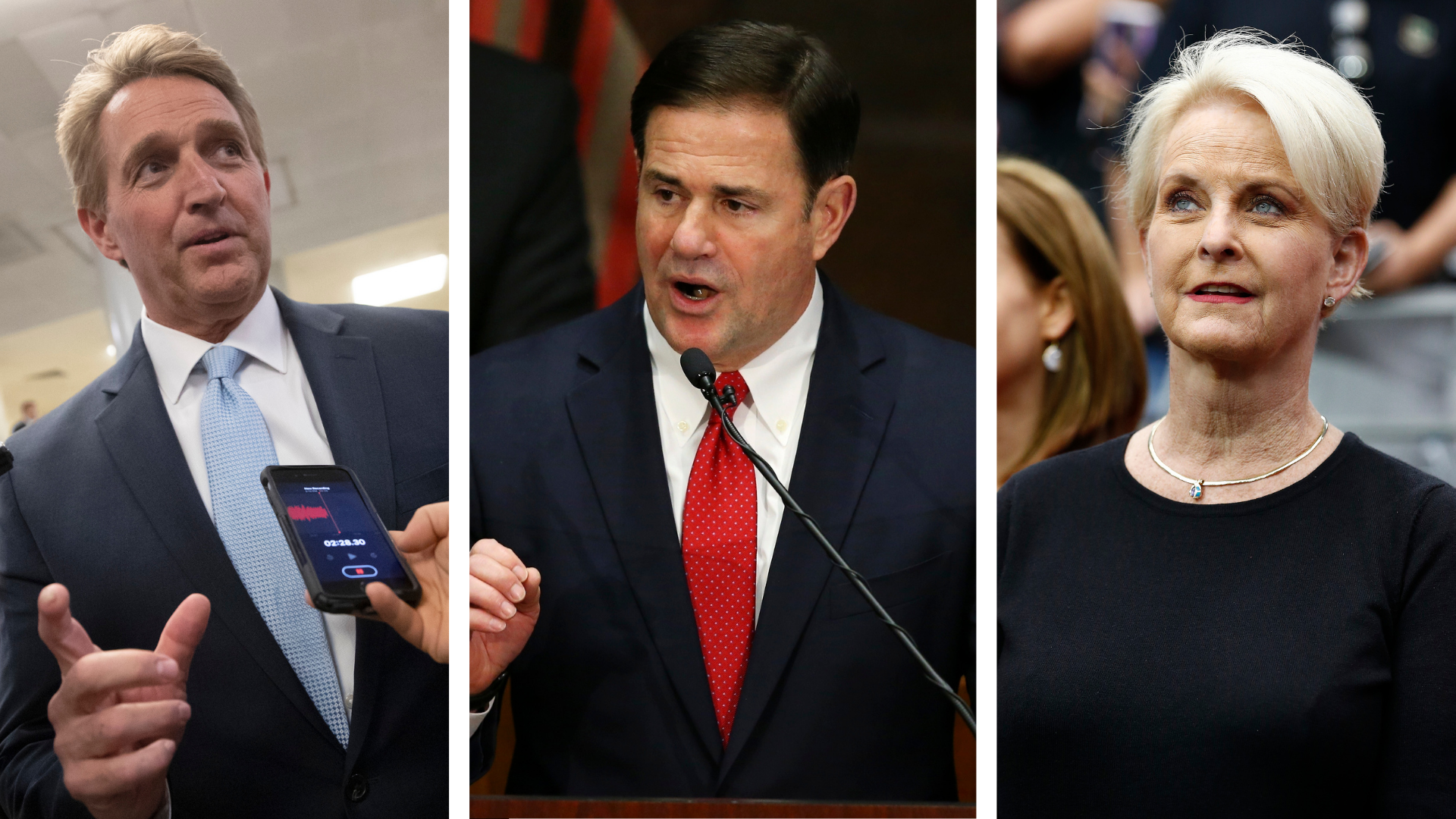 Though largely symbolic, the censuring during a meeting of the state G.O.P. on Saturday underscored a widening rift in Arizona between party officials who have made clear that their loyalty lies with former President Donald J. Trump and those in the party who refused to support him or his effort to overturn the election results in Arizona, which President Joseph R. Biden Jr. won.

The party cited Ms. McCain’s and Mr. Flake’s criticisms of Mr. Trump and Mr. Ducey’s use of emergency orders related to the pandemic, which gave him broad control to enact policies without the legislature’s approval such as closing “nonessential” businesses in the spring.

Both Mr. Flake and Ms. McCain endorsed Mr. Biden leading up to the November election. Though Mr. Ducey continually made it clear that he backed Mr. Trump, he drew ire from some Republicans by defending the state’s election process, rather than supporting efforts to challenge the November results in court.

Mr. McCain himself was censured by the state party in 2015 over his voting record, which some Republican officials there perceived as not sufficiently conservative.  As reported in the New York Times.

“The censures came at the end of a raucous seven-hour meeting. Kelli Ward, the state party chair who has long been a Trump loyalist and a polarizing figure in Arizona politics, was re-elected on Saturday after playing a recorded phone call of Mr. Trump enthusiastically endorsing her.

A few Republicans speaking out in support of Mr. Ducey were roundly booed, and nobody spoke in favor of Ms. McCain. All three resolutions were approved by a wide margin.

“These resolutions are of no consequence whatsoever, and the people behind them have lost whatever little moral authority they may have once had,” Sara Mueller, Mr. Ducey’s political director, wrote in a statement issued minutes after the vote.

The party also approved resolutions staking out hard-right positions such as calls for revoking birthright citizenship, ending the Deferred Action for Childhood Arrivals, or DACA, program, ceasing to provide translations for official government services to non-English speakers and one that “stands firm on the principles of only two genders.”

The vote to censure comes two and a half months after Mr. Biden became the first Democratic presidential candidate to carry Arizona in more than two decades, and only the second Democrat in 50 years. For decades, Republicans controlled both U.S. Senate seats, but they lost the first in 2018 and the second last year. Mr. Ducey, who was easily re-elected in 2018, is the most prominent Republican still in office who has won statewide.

Ms. McCain, Mr. Flake and Mr. Ducey each attended Mr. Biden’s inauguration on Wednesday and Ms. McCain served on the president’s transition advisory board. She has responded to the threat of censure with a sense of both annoyance and amusement, joking that she was in “good company” with her husband.

The censure resolution against Ms. McCain cited her support for “leftist causes such as gay marriage and growth of the administrative state,” and her endorsement of Mr. Biden, which was described as “in direct opposition to Republican values, the interests of the American people and the Constitution of the United States.”

On Twitter, Ms. McCain replied: “It is a high honor to be included in a group of Arizonans who have served our state and our nation so well…and who, like my late husband John, have been censured by the AZGOP. I’ll wear this as a badge of honor.”

And in an earlier interview with The Arizona Republic, Ms. McCain blasted the state party chair, Ms. Ward, for pushing for the rebukes.

She said that as the chairman of the party, Ms. Ward, “managed to turn Arizona blue in November for the first time since 1996.” She added: “Maybe she should be reminded that my husband never lost an Arizona election since his first win in 1982.”

Ms. Ward’s spokesperson declined to respond to a request for comment.

The party’s resolution against Mr. Flake said that he “once was a true Conservative, who supported freedom, Republican values, Republican candidates, and Americanism” but has since “abandoned true Republican values by professing support for progressive and globalist politicians.”

Mr. Flake wrote on Twitter that he, too, was unconcerned with the censure.

“If condoning the president’s behavior is required to stay in the party’s good graces, I’m just fine being on the outs,” he wrote.

Mr. Ducey, in an interview on Friday, said that he has given “little to no time to think” about the vote.

“I think we’re better and stronger as a party when we’re adding people rather than the alternative,” he said.

None of the three Republicans plan to formally object to the censure.

Many moderate Republican officials have dismissed the resolutions as a distraction, saying they will largely serve to alienate other moderates in a state where independent voters make up nearly a third of the electorate.

Like other Republicans who voted against the censures, Trey Terry, a state committeeman, laid the blame with Ms. Ward.

“She has set the party up for failure,” Mr. Terry said. “It’s her circus now, and the clowns have come out.”

The test of the Arizona Republican Party’s strength in the post-Trump era is not far-off — a U.S. Senate seat and all statewide offices will be up for grabs in 2022.”

Ms. Ward and her followers are indicative of a major problem in the Republican Party.  Too many of its leaders put the party before the country!