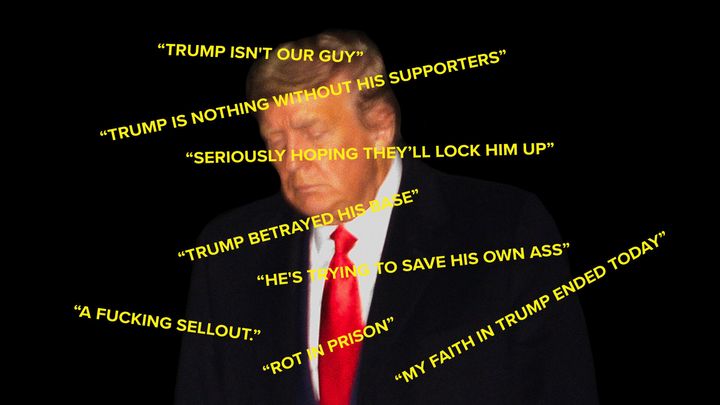 The Huffington Post has an article  this morning describing how some far-right Trump supporters are abandoning him.  For months, President Donald Trump’s message to his supporters was clear: The election was being stolen from him, and they needed to fight to take it back. Here is an extended excerpt from the article (Jesselyn Cook reporting).

“So on Jan. 6, during a Trump-promoted rally to “Stop the Steal,” thousands laid siege to the U.S. Capitol in a stunning attempt to do just that. The fallout of their failed insurrection, which resulted in five deaths, was swift: Trump was deplatformed from nearly every major social network and, on Wednesday, impeached for a historic second time.

When he emerged on camera a short while later, tail tucked between his legs, to condemn the rioters whom he himself had incited, and to call for a peaceful transfer of power to President-elect Joe Biden, his base felt betrayed.

“So he basically just sold out the patriots who got rounded up for him,” one person wrote in a 15,000-member pro-Trump Telegram group. “Just wow.”

In online havens for MAGA extremists, including Gab, CloutHub, MeWe, Telegram and far-right message boards such as 8kun, the tone toward Trump is shifting. HuffPost reviewed thousands of messages across these platforms and found that a growing minority of the president’s once-devout backers are now denouncing him and rejecting his recent pleas for peace. Some have called for his arrest or execution, labeling him a “traitor” and a “coward.” Alarmingly, many of those who are irate about Biden’s supposed electoral theft are still plotting to forcibly prevent him from taking office — with or without Trump’s help.

“We don’t follow you,” another Telegram user wrote, addressing Trump, after the president put out his video urging calm and order. “Be quiet and get out of our way.”

It has become apparent that now — after his mass radicalization campaign of voter-fraud disinformation and conspiracy-mongering — even Trump can’t stop the dangerous delusion he’s instilled across the country, or the next wave of violence it may soon bring.

Federal authorities are urgently warning of armed protests being planned in all 50 state capitals in the days leading up to Biden’s inauguration. Politically motivated extremists “will very likely pose the greatest domestic terrorism threats in 2021,” according to a new joint intelligence bulletin from the FBI, Department of Homeland Security and National Counter-terrorism Center. The document, first obtained by Yahoo News, attributes this threat to “false narratives” that Biden’s victory “was illegitimate, or fraudulent,” and the subsequent belief that the election results “should be contested or unrecognized.”

Ahead of last week’s riots, Trump supporters openly planned their attack on Facebook, Instagram, Twitter and other mainstream platforms, where they shared materials including flyers titled “Operation Occupy the Capitol.” These sites have since cracked down aggressively on such behavior, causing extremists to migrate to lesser-known corners of the internet to plan their next move.

While this has hindered their ability to spread propaganda and enlist new recruits, their new social channels are subject to less scrutiny and have already exploded in reach. CloutHub, MeWe and Telegram shot to the top of the charts of popular free apps on the App Store and Google PlayStore in the wake of the siege. Gab has also reported a massive surge in new users, with about 10,000 people signing up every hour.

In these spaces, HuffPost has observed calls to “burn down” the Capitol, launch “an armed revolt,” “pop some libtards” and “TAKE THIS COUNTRY BACK WHATEVER IT TAKES!!” Some posts are more specific: “Civil War is here. Group up locally. Take out the News stations,” one person declared. “LET’S HANG THEM ALL,” another implored. “LET’S FINISH THE DEMOCRATIC PARTY.”

The Boogaloo Bois, a far-right militia organizing to foment civil war, is capitalizing on the unrest to issue online a renewed call to arms. The FBI has warned specifically of potential Boogaloo violence during planned rallies at state Capitol buildings in Michigan and Minnesota on Sunday.

“There’s a war coming, and cowering in your home [while] real patriots march with rifles … will make you a traitor,” commented a member of an encrypted Boogaloo chat.

Some extremists, however, are urging each other not to attend any of the upcoming armed protests. The Proud Boys, a rabidly pro-Trump neo-fascist group that helped storm the Capitol, is cautioning its followers that such demonstrations could be “fed honeypot” events set up by authorities in order to seize attendees’ guns.

It seems that even the Proud Boys are losing faith in Trump: A Telegram channel run by the group reposted a message with Trump’s video along with the text “The Betrayal of Trumpist base by Trump himself continues.”

For four years, the president’s supporters have worshipped him like a god. His rallies have been likened to cult gatherings. Nearly half of his campaign donations came from small donors, trouncing Biden’s 39%. For most of his presidency, Trump enjoyed strong support from the Republican base, polling well above 90% with that group. But after the Jan. 6 riots, his support is plummeting at record rates.

MAGA world has stood unwaveringly by Trump’s side through multiple allegations of sexual assault (including rape), an impeachment for abuse of power, revelations that his administration literally caged children, a historic rise in national debt, countless lies, blatant self-enrichment by him and his family members, a pandemic that has claimed close to 400,000 American lives under his leadership — nearly a fifth of all deaths worldwide — and more.

So to see his “America First” army suddenly begin to turn on him is truly remarkable. It’s happening broadly among his supporters, and even among the far-right extremist communities that have flourished online during Trump’s presidency.

Among the recent messages excoriating Trump in dedicated pro-Trump networks:“tbh: I hope they hang Trump at this point”; “He deserves what’s coming to him”; “he is literally done he will die in jail”; “Seriously hoping they’ll lock him up or lynch [him]”; “Guy is the biggest cuck ever at this point”; “Can’t wait til the left locks up his bitch ass. Rot in prison.” Several people have proclaimed that at this point, Trump can only redeem himself by declaring martial law to maintain power by force.

After losing to Biden, Trump systematically attacked the allies that propped up his presidency in a desperate effort to keep his re-election fantasy alive.

He first turned his adherents against Fox News, which stoked his ire by accurately projecting Biden’s electoral victory in Arizona before a few other networks did so. Then, when some Republicans ― including Senate Majority Leader Mitch McConnell ― declined to play along with his unsupported claims of mass voter fraud, Trump sicced his base on them. After that came Trump’s own vice president, Mike Pence, who refused Trump’s unconstitutional demand to reject votes in favor of Biden. (“Mike Pence didn’t have the courage to do what should have been done to protect our Country and our Constitution,” Trump tweeted on the afternoon of Jan. 6, provoking chants of “Hang Pence” during the riots.)

Now that Trump himself appears to finally be backing away from his “Stop the Steal” hoax, a growing faction of his supporters is through with him, too.

But after the dramatic failure of his slow-motion coup, as he counts down the days until his return to life as a private citizen, Trump presumably has more pressing concerns than maintaining his followers’ devotion. Aside from the hundreds of millions of dollars in personal debt hanging over his head, it seems increasingly likely that he could face criminal prosecution, from which he will no longer be immune. And following his latest impeachment, if the Senate convicts him, it can also vote to disqualify him from ever running for office again.

With so much at stake and no sane hope of clinging to power, it’s now in the president’s best interest for his base to avoid further violence, which could increase his chances of conviction. But the reality is that the monster Trump created doesn’t need him anymore.

“He can promise and call for peace all he likes,” one Gab user wrote. “Won’t make a blind bit of difference.”

We could see this backlash coming.  I was surprised that the media did not make more of it especially at his rally, when he said he would walk with his followers to the Capital and then disappeared, leaving them to run on a rampage.