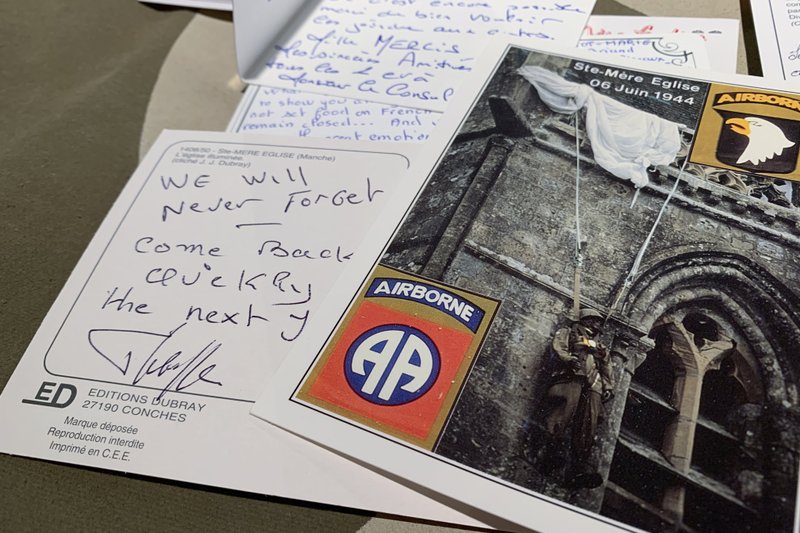 A handwritten post card from a resident of Sainte-Mere-Eglise, France thanks U.S. paratroopers for liberating their village from Nazi occupation.  The town sent 500 notes to Fort Bragg, North Carolina which were read by soldiers.  (AP Photo/Sarah Blake Morgan)

This heartfelt story appeared in The Associated Press on Christmas Eve and commemorates the sacrifice that American soldiers made on D-Day on June 6, 1944.  Read it and remember!

Lt. Col. Michael Burns didn’t know exactly what was inside the small brown box that arrived on his Fayetteville, North Carolina, doorstep but the return address in the left corner let him know he couldn’t open it right away.

The package had made the long journey from Sainte-Mere-Eglise, the first French village to be liberated from Nazi occupation by the U.S. Army’s storied 82nd Airborne Division on June 6, 1944. Every year since, division paratroopers travel to Normandy to commemorate the anniversary of D-Day, a trip that was canceled this year amid the coronavirus pandemic.

He’d assembled a group of paratroopers and a historian to take part in the unboxing as his team set up cameras and lights to capture the reveal.

History looms large over the men and women of the 82nd. This is the type of story they live for.

Capt. Darren Cinatl began pulling open the tightly wrapped package. The history buff jumped into Normandy for the commemoration three times. Each time he tries to imagine what it was like for the young men unknowingly on the verge of history.

“To stand in the door of a C-47 and think about what that jumpmaster saw on the night of June 5 as they departed England, into June 6,” Cinatl said. “You can’t put yourself quite in their shoes, but you can only imagine what motivated them to fight the way they did.”

Beneath the brown paper lay a keepsake box decorated with American decals — 500 handwritten postcards from the residents of Sainte-Mere-Eglise inside.

After the celebrations were canceled in June, town Mayor Alain Holley organized an effort alongside U.S. Army Europe to express their gratitude for the longstanding relationship they share with the division. Earlier in the year, the division had sent red and blue All American Division patches to the town’s children.

Holley grew up hearing D-Day stories from his grandparents.

“Nobody should forget the sacrifices that the American soldiers made for France,” he told The Associated Press.

While Holley watched by video call, the group took turns reading the cards out loud.

“I’m so glad to write a few words from the ground you know so well,” someone wrote. “Thanks to you I’m free to do so.”

Most were in English, but two soldiers sat by ready to translate the French cards.

A 9-year-old child named Gabriel told U.S. soldiers his birthday is June 6. He wanted to thank them for the sacrifice they made to make him free.

During his visits to Normandy, Cinatl is always struck by the local’s grasp of U.S. history, specifically how well they know the ins and outs of the 82nd. Children in France know much more about American military history, he admits, than kids in the United States do.

“To them, it’s their family story,” he said.

Twelve thousand men from the 82nd joined Allied forces on June 5 and 6, 1944, to liberate German-occupied France. Thousands parachuted blindly out of low-flying planes into unknown territory alongside the 101st Airborne Division.

The 82nd had 1,400 casualties during the campaign and the ones who survived are passing at a staggering rate, especially in a pandemic that is more deadly for older people.

Cinatl said keeping their stories alive is integral to the division’s future success.

“It is vitally important that this current generation carries on that history,” he said.

One final postcard came from Christophe, a waiter at a restaurant in Sainte-Mere-Eglise’s church square. He told the American soldiers to look for the tall guy in the Yankees cap when they return to Normandy next June.

“Show me this postcard and there will be a free beer in it for you,” he wrote.