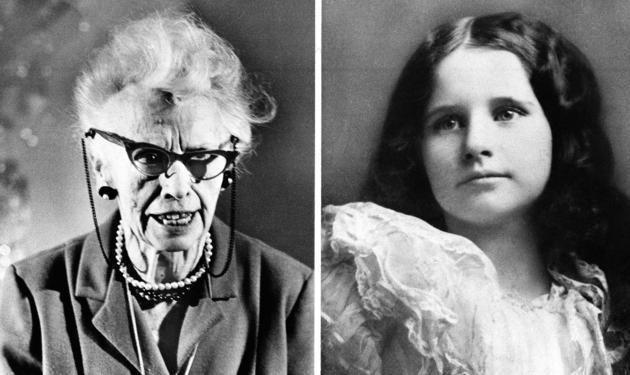 Virginia O’Hanlon Douglas, the woman who was told ‘Yes Virginia, there is a Santa Claus’ in a photo taken in 1966, and as a child. (ASSOCIATED PRESS)

Jennifer Raab, the President of Hunter College, has a most appropriate for the season op-ed in The Daily News retelling the story of Virginia O’Hanlon Douglas, who as child wrote to the New York Sun asking about Santa Claus.  The response from Francis Pharcellus Church:  “Yes, Virginia, there is a Santa Claus”  has become one of the best known sayings in newspaper history.  It is certainly one of the most cherished among those who celebrate Christmas.  It so happens that the Virginia in this case went to our own Hunter College and went on to be a teacher and junior principal in New York City schools.  Raab also comments on the importance of public education in Virginia’s case and for the present.

Below is the entire op-ed.

So yes, Virginia, there is a Santa Claus and he will be visiting all of us tonight!

“Yes, Virginia, there is a Santa Claus.” It may be the most famous sentence in the history of local journalism.

As we approach Christmas — and the traditional re-publication of the iconic 1897 New York Sun editorial featuring that classic line — it may be time to give the old phrase a new spin: Yes, Santa Claus, there was a Virginia. And she went to Hunter College.

Virginia O’Hanlon of 115 W. 95th St. was just 8 years old when she composed a letter to the editor, writing: “Some of my friends say there is no Santa Claus. Papa says, ‘If you see it in The Sun it’s so.’ Please tell me the truth; is there a Santa Claus?”

Yes, there is, the paper guaranteed her. “He exists as certainly as love and generosity and devotion exist, and you know that they abound and give to your life its highest beauty and joy.”

Those in the know must have been shocked to learn that the words came from the pen of veteran journalist Francis Pharcellus Church, brother of the Sun’s editor. Known to colleagues as a hard-boiled cynic, Church had never written so sentimentally. Now he tenderly assured young Virginia: “Nobody can conceive or imagine all the wonders that are unseen and unseeable in the world.”

Soon enough, thanks to free public higher education, Virginia saw those wonders for herself. Many of today’s newspaper readers know about the editorial. It has been widely reprinted, in the Daily News among many other papers, each year since it first appeared. It has inspired musical pageants.

But few know what happened to Virginia — or that her path in life actually followed Church’s advice to imagine the best.

The daughter of an NYPD coroner, young Virginia soon began harboring dreams that stretched beyond St. Nick’s annual visits. She aspired to teach — and motivate — children herself. So 10 years after writing to the Sun, Virginia O’Hanlon enrolled at Hunter College, which then, as now, educated many of the teachers employed by the New York City school system. Crucially, Hunter offered higher education to women of all races and religions — a rarity at the time of the school’s 1870 founding.

Graduating in 1910, Virginia went on to earn a Master’s and Ph.D., lived through the 1918 influenza pandemic, and taught grade school for decades. Eventually, she became junior principal of PS 401 in Brooklyn, a school renowned for providing an early version of “remote learning” to chronically sick children confined to the borough’s hospitals.

In 1949, Virginia O’Hanlon Douglas returned to Hunter to address students at her alma mater (and of course, retell her Santa Claus story). She retired in 1959, and died nearly 50 years ago, in 1971.

Her life — both the storybook version and the equally uplifting reality — serves as a reminder not only of faith questioned and reignited, but of the opportunities New York public education continues to provide, even now, amid the most stressful and prolonged crisis in city history.

In fact, when CollegeNET recently released its annual Social Mobility Index rankings of America’s colleges, it did not look at all like the usual “Best Colleges” lists topped by Ivy League names. The index, which analyzes colleges’ success at graduating low-income students into well-paying jobs, was front-loaded with public universities. Hunter ranked 9th out of 1,449 schools.

More than a century after Virginia matriculated, Hunter’s student population still offers a springboard to opportunity. Hunter has already served as the launchpad for, among others, Bella Abzug, Martina Arroyo, Ruby Dee, Pauli Murray, Dr. Rosalyn Yalow — and from our high school, such luminaries as Elena Kagan and Lin-Manuel Miranda

Always, we’ve taken particular pride in students, from here and overseas, who are the first in their families to attend college.

Just look what the most recent graduating class is up to. Elliot Natanov, the son of immigrants who fled anti-Semitism in Uzbekistan, is now pursuing a career in sports medicine. Ahmet Doymaz, who immigrated from Turkey as a child, studies cancer and cell regulation. Evelyn Tawil, daughter of Syrian refugees, is pursuing a graduate degree in landscape architecture. Jennifer Dikler, whose parents fled Russia, won a coveted Luce Scholarship to study trade policy in Asia.

Among recent grads, Margarita Labkovich became a Schwartzman Fellow in 2020 and will spend a year at Beijing’s Tsinghua University before returning to medical school and resuming her career as chief operating officer of Retina Technologies (she already holds two patents). And Thamara Jean, daughter of a Haitian-born synagogue superintendent, now attends Oxford University as Hunter’s first-ever Rhodes Scholar. These remarkable young people are soaring above their circumstances, with Hunter’s full support at their backs — and no debt collectors at their front doors.