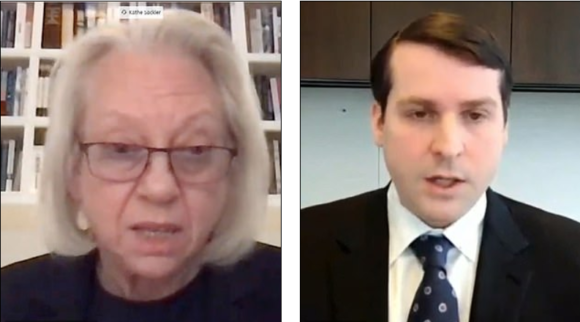 Two members of the Sackler family who served on the board of Purdue Pharma in 2018 testified before the U.S. House of Representatives under threat of subpoena yesterday, where they answered questions about their role in the opioid epidemic.  As reported by the New York Times and other news media.

Lawmakers on the Committee on Oversight and Reform peppered David and Dr. Kathe Sackler with questions in the  testy hearing.

While the Sacklers acknowledged the role Purdue’s painkiller OxyContin played in the epidemic, which has taken roughly 450,000 lives in the United States since 1999, they stopped short of apologizing or admitting any wrongdoing.

Asked if she’d apologize for her role in precipitating the crisis, Kathe Sackler said that after plenty of soul-searching, she’s not sure she’d have taken a different course.

The comment provoked a fiery retort from Rep. Kelly Armstrong (R-N.D.) who later replied, “Ms. Sackler, you wanted to ask what you could have done differently? Look at your own damn balance sheet!”

Purdue generated more than $30 billion after bringing OxyContin to market in 1996. The privately held company transferred $12 to $13 billion of that to the family, according to a deposition revealed in court filings in October.

The company pleaded guilty to three federal criminal charges last month and agreed to pay an $8.3 billion settlement. But the company filed for bankruptcy in September 2019, making it unlikely the money will be fully collected. The Sackler family also agreed to pay $225 million in civil damages ― less than roughly 2% of their net worth.

State attorneys general criticized the Department of Justice settlement as “a mere mirage of justice” that allowed “billionaires to keep their billions” while evading any real responsibility.

“Watching you testify makes my blood boil,” Rep. Jim Cooper, a Tennessee Democrat, told the Sacklers Thursday. “I’m not sure that I’m aware of any family in America that’s more evil than yours.”

In her closing remarks, Committee Chairwoman Carolyn Maloney (D-N.Y.) urged the Sacklers “to mitigate at least some of the damage you caused.”

“Please stop hiding and offshoring your assets,” she urged. “Stop nickle-and-diming the negotiators. Make a massive financial contribution that leaves no doubt about your commitment, and finally acknowledge your wrongdoing.”

“The families and communities whose lives have been ruined deserve at least that much,” she closed. ”[The Sacklers] have taken money out of the company so it would be forever beyond the legal reach of the people they were harming. They are the Bernie Madoffs of medicine.”

The Sacklers should be tried as criminals for their role in causing the deaths of 450,000 innocent Americans.