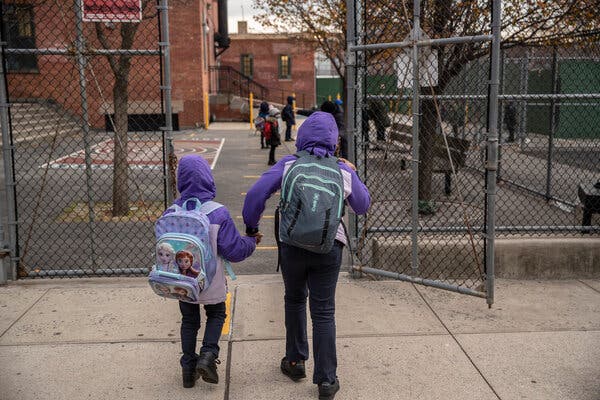 The New York Times has a featured article this morning focusing on whether vaccinating teachers will get students back to school.  Opinions vary with teachers’ unions largely supporting plans to put educators near the front of the vaccine line, but this might not be enough to open more schools in the spring. The authors of the article interviewed a number of education leaders throughout the country to get their views.  The entire article (see below) provides balance and insight into the complexity of the question.

If Teachers Get the Vaccine Quickly, Can Students Get Back to School?

States and cities across the country are moving to put teachers near the front of the line to receive a coronavirus vaccine, in an effort to make it safer to return to classrooms and provide relief to struggling students and weary parents.

In Arizona, where many schools have moved online in recent weeks amid a virus surge, Gov. Doug Ducey declared that teachers would be among the very first people inoculated. “Teachers are essential to our state,” he said. Utah’s governor talked about possibly getting shots to educators this month. And Los Angeles officials urged prioritizing teachers alongside firefighters and prison guards.

But in districts where children have spent much of the fall staring at laptop screens, including some of the nation’s largest, it may be too early for parents to get their hopes up that public schools will throw open their doors soon, or that students will be back in classrooms full time before next fall.

Given the limited number of vaccines available to states and the logistical hurdles to distribution, including the fact that two doses are needed several weeks apart, experts said that vaccinating the nation’s three million schoolteachers could be a slow process, taking well into the spring.

And even once enough educators are inoculated for school officials and teachers’ unions — which hold considerable power in many large districts — to consider it safe to reopen classrooms, schools will likely need to continue requiring masks and distancing students for many months, experts said, until community spread has sharply dropped, possibly by summer.

“I think some people have in their head that we’re going to start rolling out the vaccine and all this other stuff is going to go away,” said Marcus Plescia, the chief medical officer at the Association of State and Territorial Health Officials, which represents public health agencies.

But in schools, as in daily life, he said, there will be no quick fix. “My feeling is that we’re all going to be wearing masks and keeping our distance and trying to be careful around each other for probably most of 2021.”

Vaccination could have the largest impact on schools in places where teaching has remained entirely remote this fall, or where students have spent limited time in the classroom. That includes many big cities and districts in the Northeast and on the West Coast, which have been the most cautious about reopening despite little evidence of schools — and elementary schools in particular — stoking community transmission.

At the same time, there are many schools in the South, the Midwest and the Mountain States where a large percentage of teachers and students are already in classrooms, and where a vaccine would most likely not have as much impact on policy. But even in some of those parts of the country, such as Arizona, distance learning has resumed in recent weeks as coronavirus cases have surged, and vaccinating teachers could help reduce such disruptions.

The nation’s roughly three million full-time teachers are considered essential workers by the Centers for Disease Control and Prevention, which means that in states that follow federal recommendations, they would be eligible to receive the vaccine after hospital employees and nursing home residents.

But the essential worker group is huge — some 87 million Americans — and states will have flexibility in how they prioritize within that population. Many more people work in schools than just teachers, including nurses, janitors and cafeteria workers, and it is unclear how many of them would be included on the high-priority list.

Public health experts disagree on where teachers should fall, with some saying that in-person education is crucial and others noting that teachers generally have better protections and pay than many other essential workers, such as those in meatpacking plants and day cares. Many teachers have not been in their classrooms since March, either because their districts have not physically reopened, or because they have a medical waiver exempting them.

Groups that represent teachers, for the most part, are eager to see their members fast-tracked for vaccines. Last month, more than 10 educational organizations, including the nation’s two largest teachers’ unions, wrote to the C.D.C. asking that school employees be considered a priority group.

“Our students need to come back to school safely,” they wrote. “Educators want to welcome them back, and no one should have to risk their health to make this a reality.”

Teachers in districts that have already opened classrooms, like Houston and Miami, should be prioritized for shots, said Randi Weingarten, president of the American Federation of Teachers, which includes some of the country’s largest local chapters.

“Let’s have an alignment here of the schools that are reopening for in-person learning and availability of vaccine,” she said. As more teachers are vaccinated, she added, “we believe that more and more schools can open in person.”

In New York City, home to by far the country’s largest school system, Mayor Bill de Blasio has confidently predicted that many more of the city’s 1.1 million students will be able to return to classrooms this spring as the vaccine is distributed to educators.

Michael Mulgrew, who runs the United Federation of Teachers, the local union, said he thought that timeline might be overconfident — “I don’t think it’s around the corner,” he said of full reopening — but agreed that the thousands of teachers in New York City who were working in person should be among the first educators to get their shots.

Mayor Bill de Blasio has predicted that many more of New York City’s 1.1 million students will be able to return to classrooms this spring as the vaccine is distributed to educators. Credit…Victor J. Blue for The New York Times

Other union leaders, however, were wary about efforts to prioritize within their ranks.

“We don’t want to be in the business of putting a hierarchy in place,” said Becky Pringle, who runs the country’s largest teachers’ union, the National Education Association, “because some of our members are being bullied into returning back to classrooms. That’s not safe, we don’t want to support that.”

Teacher health concerns and union political power have played a significant role in states and cities that have not yet opened their schools, including Los Angeles and Chicago, the nation’s largest districts after New York. In California, where teachers’ unions hold great sway, state and local health rules will not allow the Los Angeles Unified School District to reopen classrooms until the rates of known cases drop significantly, regardless of the vaccine.

Austin Beutner, the superintendent, said he would like to use the district’s extensive testing infrastructure to systematically vaccinate teachers, school nurses and others. But he does not expect a return to pre-pandemic conditions — dozens of children in classrooms five days a week, without social distancing or masks — until the end of 2021.

“If we were able to provide those who work in a school with a vaccine tomorrow, great. They themselves are protected. But they could also be a silent spreader,” he said, referring to the fact that it has not yet been determined if vaccinated people can still carry and spread the coronavirus. And students are unlikely to receive shots before the fall because pediatric trials have only recently begun.

In Chicago, the teachers’ union is fighting a plan to begin returning some students to schools early next year. “Obviously, if school is continuing remote, there’s less urgency around the vaccination,” said the Chicago Teachers Union’s president, Jesse Sharkey.

Asked if he could imagine schools opening before fall 2021, Mr. Sharkey said yes, but he suggested it would have more to do with controlling the spread of the virus than vaccinating teachers. “With mitigation strategies in place, and with a reasonably low level of community spread, I do think that we could get to open schools,” he said.

Not every union leader expects all of their members to eagerly line up for inoculation. “Some don’t want to go back unless there is a vaccine, and others absolutely don’t believe in it,” said Marie Neisess, president of the Clark County Education Association, which represents more than 18,000 educators in Nevada.

In California, E. Toby Boyd, president of the state’s largest teachers’ union, said educators have been told they will be in the second wave of vaccinations. But some teachers may be reluctant to be among the first recipients.

“My members are anxious to get back to the classroom, but they’re skeptical,” said Mr. Boyd, whose organization, the California Teachers Association, represents some 300,000 members. “We need to be sure it’s safe and there are no lasting side effects.”

Teachers in California also continue to push for other safety measures that they think need to be addressed before normal school can resume. “We view the vaccine as one important layer in preventing school outbreaks,” said Bethany Meyer, a special-education teacher and union leader in Oakland, Calif.

“We also need testing and tracing and other mitigation measures, and that’s going to be the case for some time,” Ms. Meyer said, adding, “A vaccine is important, but our thinking is longer term than that.”

In places like Miami, where public schools have been open for much of the fall, vaccinations could have a different effect. Karla Hernandez-Mats, the leader of United Teachers of Dade, said she believed that widespread vaccination among educators there would help reduce the chaos caused by frequent quarantines and classroom closures.

The vaccine, she said, “would create more of a sense of normalcy, and it would bring a lot of relief to a lot of teachers working in person right now.”