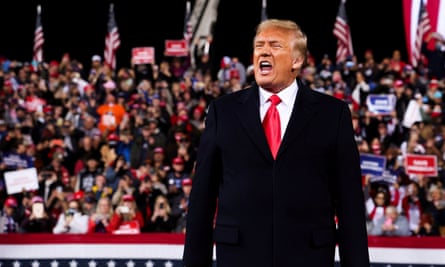 Last night,  I was curious enough to watch television coverage of  Donald Trump’s rally in Georgia to see if he would really focus on supporting Republican senatorial candidates David Perdue and Kelly Loeffler.   I should have known better.

Before about 4,000 plus Trump fans, most not wearing masks,  the rally started with Melania Trump reading off a teleprompter about how “President Trump did this and President Trump did that…”  She then introduced her husband at which point, Trump commented on what a popular first lady Melania was.  Trump opened with how he won Florida, Ohio and the presidential election.  He then criticized Georgia Governor Brian Kemp for not calling a special session of the Georgia Legislature to investigate and order another audit of the presidential election.

After fifteen minutes of this, I shut the television off and went for a walk in the cold winter air.  When I returned, I watched “The Maltese Falcon” on Turner Classic Movies, and then finished reading The Tyranny of Merit by Michael J. Sindal.

It was a most enjoyable evening without the disgraceful Trump.

Below is a recap of his address, courtesy of the Associated Press.

President Donald Trump pressed his grievances over losing the presidential election Saturday, using a rally to spread baseless allegations of misconduct in last month’s voting in Georgia and beyond even as he pushed supporters to turn out for a pair of Republican Senate candidates in a runoff election in January.

“Let them steal Georgia again, you’ll never be able to look yourself in the mirror,” Trump told rallygoers.

Trump’s 100-minute rally before thousands of largely maskless supporters came not long after he was rebuffed by Georgia’s Republican governor in his astounding call for a special legislative session to give him the state’s electoral votes, even though President-elect Joe Biden won the majority of the vote.

The Jan. 5 Senate runoffs in Georgia will determine the balance of power in Washington after Biden takes office. Republicans in the state are worried that Trump is stoking so much suspicion about Georgia elections that voters will think the system is rigged and decide to sit out the two races.

Republicans need one victory to maintain their Senate majority. Democrats need a Georgia sweep to force a 50-50 Senate and position Vice President-elect Kamala Harris as the tiebreaking vote. Party officials had hoped the president would dedicate his energy to imploring supporters to vote in the runoff, when Perdue and Loeffler try to hold off Democrats Jon Ossoff and Raphael Warnock, respectively.

Trump did echo Republican rhetoric that the races amounted to “the most important congressional runoff, probably in American history.” That is only true because he lost.

But after Air Force One landed, it quickly became apparent that Trump was intent on airing his own complaints and stoking baseless doubts about the conduct of last month’s vote, rather than boosting his party.

“I want to stay on presidential,” Trumps said minutes into his speech. “But I got to get to these two.” He praised the GOP lawmakers, Perdue for his support for military spending and Loeffler for pushing for early coronavirus relief spending. But he quickly pivoted back to his own defeat.

Trump pulled out a piece of paper and read a list of his electoral achievements, including falsely asserting he won Georgia and the White House. Biden carried the state by 12,670 votes and won a record 81 million votes nationally. Trump continued to reiterate his unsubstantiated claims of fraud, despite his own administration assessing the election to have been conducted without any major issues.

Chants of “Fight for Trump” drowned out the two senators as they briefly spoke to the crowd.

Hours before the event, Trump asked Georgia Gov. Brian Kemp in a phone call to order the legislative session; the governor refused, according to a senior government official in Georgia with knowledge of the call who was not authorized to discuss the private conversation and spoke on the condition of anonymity. A person close to the White House who was briefed on the matter verified that account of the call.

Kemp, in a tweet, said Trump also asked him to order an audit of signatures on absentee ballot envelopes in his state, a step Kemp is not empowered to take because he has no authority to interfere in the electoral process on Trump’s behalf.

Trump, though, vented his frustrations with Kemp on Twitter and at the rally.

“Your people are refusing to do what you ask,” he complained in a tweet, as if speaking with Kemp. “What are they hiding? At least immediately ask for a Special Session of the Legislature. That you can easily, and immediately, do.”

At the rally, he took aim once again at Kemp, saying he could assure him victory “if he knew what the hell he was doing.”

Trump’s personal contact with the governor demonstrated he is intent on amplifying his conspiratorial and debunked theories of electoral fraud even as Georgia Republicans want him to turn his focus to the runoff and encourage their supporters to get out and vote.

In his tweet, Kemp said: “As I told the President this morning, I’ve publicly called for a signature audit three times (11/20, 11/24, 12/3) to restore confidence in our election process and to ensure that only legal votes are counted in Georgia.”

While the governor does not have the authority to order a signature audit, an audit was initiated by Secretary of State Brad Raffensperger and it triggered a full hand recount that confirmed Biden’s victory in Georgia. The race has been certified for Biden and affirmed by the state’s Republican election officials as a fairly conducted and counted vote, with none of the systemic errors Trump alleges.

But after two pro-Trump lawyers this past week questioned whether voting again is even worth it — in echoes of the president’s baseless accusations of widespread voter fraud — even Vice President Mike Pence betrayed concerns that the Republican coalition could crack under the force of Trump’s grievances.

“I know we’ve all got our doubts about the last election, and I hear some of you saying, ‘Just don’t vote,’” Pence said Friday while campaigning with Perdue in Savannah. “If you don’t vote, they win.”

Few Republicans in Washington or Georgia believe wide swaths of the electorate in this newfound battleground would opt out of voting because of Trump’s false claims or his denigration of the Georgia governor and secretary of state for certifying Biden’s victory in the state.

The risk for the GOP is that it wouldn’t take much of a drop-off to matter if the runoffs are as close as the presidential contest: Biden won Georgia by about 12,500 votes out of 5 million cast. There’s enough noise to explain why Pence felt the need to confront the matter head on after two Trump loyalists floated the idea of the president’s supporters bailing on Perdue and Loeffler.

Trump’s false claims have resonated with voters such as Barry Mann, a 61-year-old business owner who came to hear Pence in Savannah. Mann hasn’t decided whether he’ll vote for his senators a second time.

“I think there’s some issues with our election and more investigation needs to be done,” Mann said, adding that he doesn’t think Perdue and Loeffler have done enough to support Trump’s efforts to overturn the results. “I want to see what happens between now and January,” Mann said.