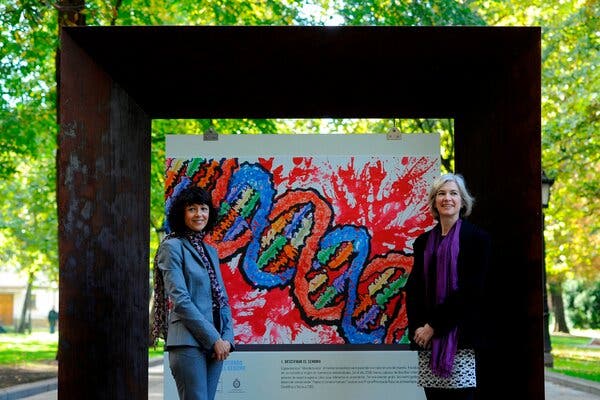 Emmanuelle Charpentier and Jennifer A. Doudna

The Nobel Prize in Chemistry was jointly awarded this morning to Emmanuelle Charpentier and Jennifer A. Doudna for their 2012 work on the development of Crispr-Cas9, a method for genome editing. The announcement marks the first time a science Nobel has been awarded to two women.

Dr. Charpentier, who is French, is the director of the Max Planck Unit for the Science of Pathogens in Berlin. Dr. Doudna  is a professor at the University of California, Berkeley. They are the third and fourth women to be awarded the Nobel Prize in Chemistry in the 21st century, out of more than 50 recipients.

“This year’s prize is about rewriting the code of life,” Goran K. Hansson, the secretary-general of the Royal Swedish Academy of Sciences, said as he announced the names of the laureates.

Dr. Charpentier and Dr. Doudna, only the sixth and seventh women to receive the chemistry prize, pioneered early work on Crispr-Cas9, a kind of genetic scissors that allows researchers to alter the DNA of animals, plants and microorganisms with extremely high precision. Since then, it has been used in numerous scientific applications, from genetically modifying crops to developing cures-in-progress for conditions like sickle cell disease and hereditary blindness.

Fast, efficient and economic, Crispr “solves problems in every field of biology,” said Angela Zhou, an information scientist at the CAS at the American Chemical Society.

“This technology has utterly transformed the way we do research in basic science,” said Dr. Francis Collins, director of the National Institutes of Health. “I am thrilled to see Crispr-Cas getting the recognition we have all been waiting for, and seeing two women being recognized as Nobel Laureates.”

Claes Gustafsson, chair of the Nobel Committee for Chemistry, said, “There is enormous power in this genetic tool, which affects us all.”

Congratulations to the winners!