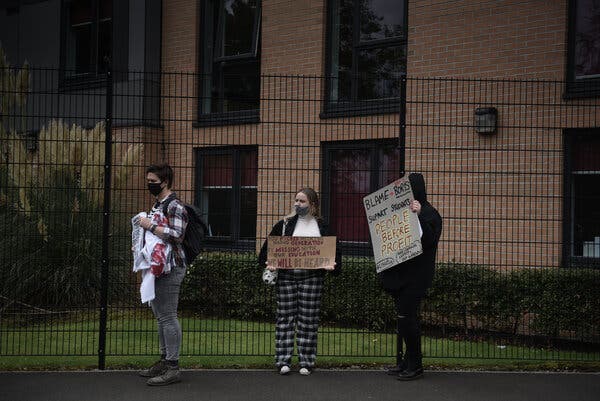 The New York Times has an article this morning entitled, “It Really Was Abandonment:  Virus Crisis Grips British Universities”, that reports on the rapid and uncontrolled spread of coronavirus in UK universities.  To date, roughly 90 British universities have reported coronavirus cases. Thousands of students are confined to their halls, some in suites with infected classmates, and many are struggling to get tested. The government, fearful of students seeding outbreaks far from campus, has warned that they may need to quarantine before returning home for Christmas.  As reported.

“Britain had ample warning: The reopening of American colleges weeks earlier reportedly swelled the country’s case count by 3,000 a day and left several students dead. But British universities beckoned students to campus anyway, fueling outbreaks that are seeping into surrounding towns. The infection rate in Manchester is ten times as high as it was in August.

The outbreaks have shone a harsh light on Britain’s decade-long campaign to turn higher education into a ruthless market. By cutting state grants and leaving schools dependent on tuition fees and room rents, the government encouraged them to jam more students onto campuses.

The pandemic threatened to dry out that income stream. But Prime Minister Boris Johnson’s Conservative government largely withheld the rescue money it gave to other industries, so universities carried on as normal, whatever the risks.

To academics, the government’s policies reflect not only its erratic and fumbling approach to the coronavirus, but also its longstanding suspicions of universities. Echoing American ideas about the supposed coddling of left-wing students, some Conservative lawmakers in Britain have accused universities of stifling politically incorrect speech, and threatened a crackdown.

“There’s a lot of money being splashed around on other parts of the economy, but the government isn’t offering universities any money,” said Steven Fielding, a professor of political history at the University of Nottingham. “The relevant people in government see universities as antagonists, political antagonists, and people like me as the enemy.”

… Supplied with little more than a single mask each, some first-year students watched their food supplies dwindle and trash and laundry accumulate when coronavirus cases forced their suites into isolation. Lucia Dorado, a freshman, recalled leaving meals and tea at a suitemate’s door, and watching students keep partying in the courtyard.

“It really was abandonment,” Ms. Dorado said of the university. “They put in barely anything to battle this, and it’s come at the expense of our mental and physical health, really.”