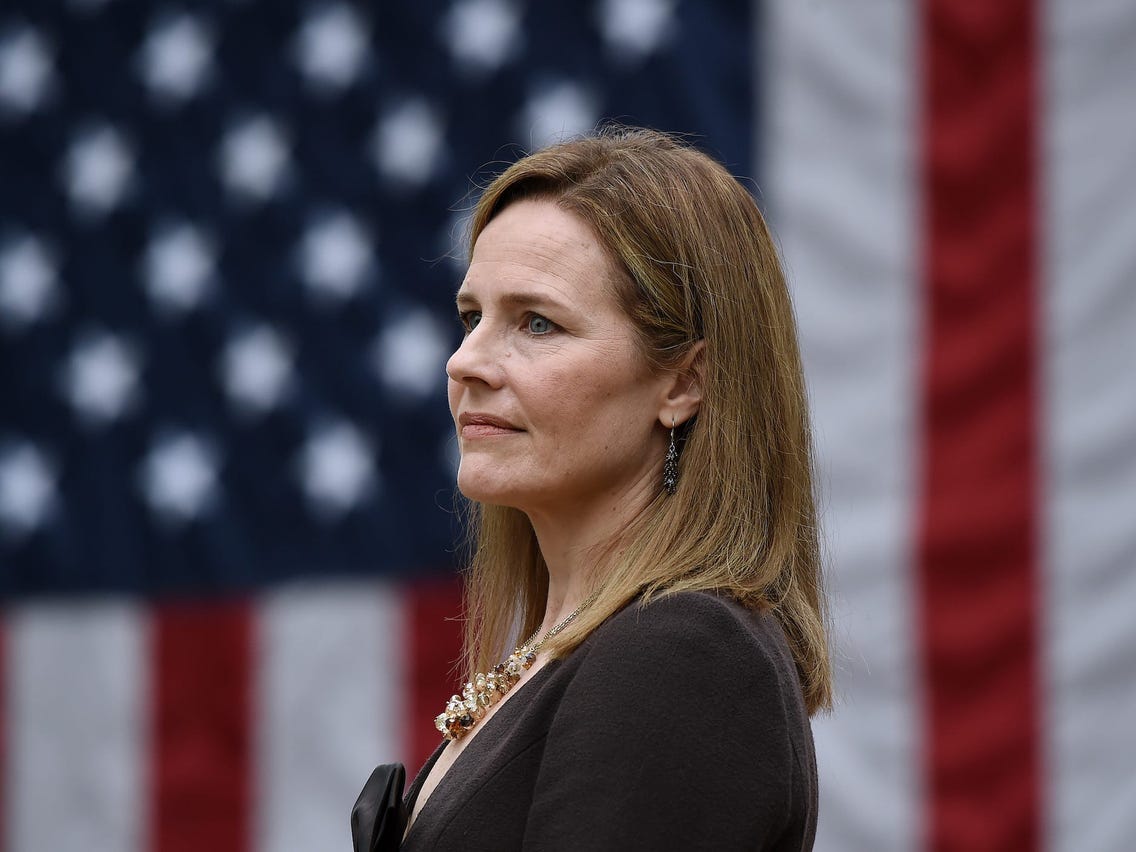 “Judge Barrett, who is on the U.S. Court of Appeals for the Seventh Circuit, has impeccable intellectual credentials — and a record that stands in stark contrast to Justice Ginsburg’s. She has written that abortion is “always immoral,” and joined two dissents against decisions supporting the right to choose.”

Bazelon likens Barrett’s nomination to Justice Clarence Thomas who replaced Thurgood Marshall and who “has become famous for his hostility to civil rights; affirmative action; and most of the claims raised by criminal defendants, who are disproportionately people of color.”

Bazelon concludes:  “Make no mistake: Judge Barrett’s confirmation will be the wrecking ball that finally smashes Roe v. Wade and undoes the Affordable Care Act. Her crucial vote on these cases and so many others will undo decades of the progress that Justice Ginsburg worked her whole life to achieve.”

President Trump’s promise to name a woman to replace Ruth Bader Ginsburg, who died on Sept. 18 at 87, was cynical and insulting to the millions of women who view the late Supreme Court justice as a feminist icon. Senator John Barrasso, a Wyoming Republican, praised the decision as a “powerful positive statement” to young women, who would embrace the president’s nominee as a “role model.” The message to women is clear: Nothing to see here, ladies! One of you is as good as any other.

Women aren’t gym socks, purchased in bulk so that a replacement can be seamlessly substituted into the rotation when one goes missing in the washing machine. The next Supreme Court justice will cast crucial votes that affect women’s fundamental rights, including the right to control their own bodies and to gain access to affordable health care for themselves and their families. The fact that President Trump’s nominee is a woman matters less if she does not support the causes at the heart of the long, continuing march for gender equality that Justice Ginsburg championed.

The Democratic presidential nominee, Joe Biden, has also vowed to pick a Black woman as his first nominee to the Supreme Court. But he’s not going to gaslight us by choosing someone who will share the judicial philosophy of the court’s conservative wing, just as no one believed that Mr. Biden’s vice-presidential pick — whom he also promised would be female — would be a Republican who repudiated every plank of his platform. (Indeed, Biden’s running mate, Kamala Harris — fairly or not — has been denounced by the Trump campaign as the most liberal member of the U.S. Senate.)

Judge Barrett, who is on the U.S. Court of Appeals for the Seventh Circuit, has impeccable intellectual credentials — and a record that stands in stark contrast to Justice Ginsburg’s. She has written that abortion is “always immoral,” and joined two dissents against decisions supporting the right to choose. One decision stopped the enforcement of a state law that would have required a minor — regardless of her maturity or family situation — to notify her parents of her decision to have an abortion, giving them veto power, unless a judge found this was not in her best interests.

Another decision struck down a state law banning abortions at any stage of pregnancy based on fetal disabilities, including those that were life-threatening. (The law also banned abortions based on race, ethnicity and gender.) Judge Barrett dissented from a ruling banning people with felony convictions from possessing firearms, and publicly criticized Chief Justice John G. Roberts Jr. for voting with the high court’s liberal bloc to uphold the Affordable Care Act, saying he pushed the statute “beyond its plausible meaning” to save it.

Make no mistake: Judge Barrett’s confirmation will be the wrecking ball that finally smashes Roe v. Wade and undoes the Affordable Care Act. Her crucial vote on these cases and so many others will undo decades of the progress that Justice Ginsburg worked her whole life to achieve.

Justice Ginsburg’s most important legacy is that she was a forward-thinking, canny and unabashed feminist. Beginning in the 1970s, as a co-founder of the A.C.L.U.’s Women’s Rights Project, she argued six sex-discrimination cases before the U.S. Supreme Court and won five. In several of them, she sought to invalidate laws that barred men from taking advantage of certain benefits, driving home the point — to an all-male court — that unequal treatment hurts everyone equally.

She built on that work as a justice. In 2016, she called out Texas’ claim that a law sharply curtailing women’s access to abortion was actually safeguarding women’s health as “beyond rational belief.” (The court struck down the law 5-4.) Justice Ginsburg was known as much for the power of her dissents as for the majority opinions she wrote. When the Supreme Court ruled 5 to 4 that a female supervisor at a tire company had waited too long to sue her employer for paying her less than her male colleagues, Justice Ginsburg noted that the secrecy shrouding employee compensation made a timely filing impossible and urged Congress to act. Congress did, and in 2009 President Barack Obama signed the Lilly Ledbetter Fair Pay Act, which did away with stringent and unrealistic time requirements.

Republicans would have us believe that ramming through Justice Ginsburg’s replacement less than two months before the election — and after denying President Obama, who had 11 months left in his second term, the chance to replace Justice Antonin Scalia — is fine and dandy because, well, the new justice is a woman. When it comes to the Supreme Court, we’ve been to this identity politics movie before, and we know how it ends.

In 1991, President George H.W. Bush nominated Clarence Thomas, a federal appellate judge, to replace Thurgood Marshall, a civil rights warrior who had argued Brown v. Board of Education and then as a justice had written many decisions expanding civil rights and criminal justice protections for racial minorities. (Justice Ginsburg was known as the “Thurgood Marshall of gender equality law.”) Republicans predicted, correctly, that Democrats would find themselves in a difficult position because, like Justice Marshall, the nominee was Black.

Although nothing about Judge Thomas’s career and judicial record suggested he would be anything like Justice Marshall, and though he faced credible allegations of sexual harassment from Anita Hill, he was confirmed 52 to 48, after accusing Democrats of orchestrating a “high-tech lynching.” (In another twist, many blame Mr. Biden — then chairman of the Senate Judiciary Committee — for his bungling of the confirmation hearing and his poor treatment of Ms. Hill.) In his decades on the court, Justice Thomas has become famous for his hostility to civil rights; affirmative action; and most of the claims raised by criminal defendants, who are disproportionately people of color.

On her deathbed, Justice Ginsburg wrote that her “most fervent wish” was that a new justice would not be installed until after the election. It is a cold calculation by the president, a master misogynist, that the nomination of a woman, in and of itself, would be enough to soften any opposition to the ugliness of a rushed, hypocritical and nakedly political charade. Think again Mr. President: We aren’t stupid.