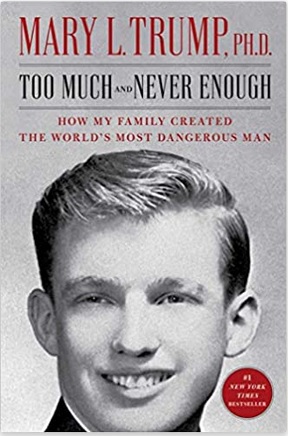 I just finished reading Mary Trump’s memoir, Too Much and Never Enough,  about her dysfunctional family.  It is a short book that one can easily get through during one rainy weekend.  Ms. Trump, a clinical psychologist with a Ph.D, focuses a lot on the personality characteristics of the president and his father, Fred, both of whom were driven by money, greed, winning, and hurting anyone who stands in their way.   She analyzes how these two men destroyed her father, Fred Jr.,  who succumbed to alcoholism and died at the age forty-two.

She takes deep cuts at Donald and describes him as having  the emotional maturity of a 3-year-old and burdened by what she calls an insatiable “black hole of need.” He was trained to hunger endlessly for daddy’s approval.

Her book is unlikely to change anybody’s mind about Trump but it is an interesting read as we head into the presidential election. She fears he will bring the entire country down if re-elected.

A full review of this book, courtesy of the New York Times is below.

All in the Family Dynamics: Donald Trump’s Niece on the President’s Clan

Robert Trump, baby brother of Donald Trump, has had a curious turn in the spotlight these last couple of weeks, as he has repeatedly tried to prevent the publication of “Too Much and Never Enough,” a new memoir by his and the president’s niece, Mary L. Trump. In the book, it turns out that Uncle Rob has only a bit part to play — the youngest child of five who took the path of least resistance, sliding into the executive chair of his father’s business, a mostly passive bystander to the central drama between Donald and Mary’s father, Freddy. Still, Mary doesn’t strip Rob of all personality. She remembers him as a teenager, not much older than she was, leaning against the refrigerator as he peeled back the foil on a block of Philadelphia cream cheese and ate it “as if it were a candy bar.”

It’s the kind of detail — memorably specific, fundamentally human and decidedly weird — that gives this book an undeniable power, even if its narrative is bookended by Mary’s strenuous efforts to put her training as a clinical psychologist to use. She has no problem calling Donald Trump a narcissist, and she also identifies additional signs of antisocial personality disorder (the vaingloriousness), dependent personality disorder (the neediness) and a substance-induced sleep disorder (the dozen daily Diet Cokes). When she writes in her prologue that “Donald has been institutionalized for most of his adult life,” she isn’t referring to anything so salubrious as mental health treatment. “Institutionalization” here refers to the gilded cosseting provided by the family name and fortune that ensured Donald would never have to survive by his own wits in the real world.

But will the real world survive Donald Trump? Mary says that American democracy will not if he gets a second term. The story she describes in “Too Much and Never Enough” is presented as a cautionary tale. Donald, she says, can’t help recreating a familial psychodrama that destroyed everyone it touched. She recalls waking up at 5 a.m. the morning after the 2016 election: “It felt as though 62,979,636 voters had chosen to turn this country into a macro version of my malignantly dysfunctional family.”

That dysfunction is abundantly chronicled in this book, as Mary describes how the five Trump children of her father’s generation all struggled to make do in a household where their mother’s chronic health problems left them at the mercy of a patriarch who was both uncaring and controlling. The oldest, Maryanne, was the uptight good girl; Freddy was the laid-back rebel; Elizabeth was the unassuming middle child; Rob was the baby, quiet and eager to please. And Donald, the second-youngest, was Donald: ingratiating to his father, disobedient to his mother and bullying to his younger brother, stealing little Rob’s favorite toy trucks and goading him into kicking a hole in the bathroom door.

The sanitized version of the family myth is that Fred Trump valorized the importance of hard work, but Mary says this simply isn’t true. Fred’s real estate business depended on political connections and government largess; what he taught the Trump children to revere was not so much effort as dominance. “The person with the power (no matter how arbitrarily that power was conferred or attained) got to decide what was right and wrong,” Mary writes. The world was a zero-sum death match between winners and losers. Mary explains how a child would experience such life lessons as confusing, terrifying and stultifying. Her father, the eldest son, tried to resist, becoming a commercial pilot for a time before despair and alcoholism crushed his career, his marriage and his health; he died of a heart attack at 42, when Mary was a teenager.

Donald, though — he thrived in the world that his father created, even if, as Mary argues, his personality was ultimately deformed by the experience. The psychologist in her is sympathetic. She says her uncle has the emotional maturity of a 3-year-old and has “suffered mightily,” burdened by what she calls an insatiable “black hole of need.” He was trained to hunger endlessly for daddy’s approval; it’s just that now, as president of the United States, she says, the figures who remind him of home are Vladimir Putin and Kim Jong-un.

Of course, her book is unlikely to change anybody’s mind. One imagines that a number of the president’s supporters may not even consider his upbringing to be that disturbing, considering how he himself continuously re-enacts Fred’s grab bag of parenting methods — the belittling, the “toxic positivity” of saying everything’s great even as it collapses — on the national stage. But Mary, who was also a graduate student of comparative literature, knows how to tell a story and choose an anecdote.

A section on the gifts that her family received from Donald and his first wife, Ivana, suggests that their feints at generosity were bizarrely cheap and therefore rich with symbolism. Her brother received a handsome leather-bound journal that was two years out of date; Mary received a cellophane-wrapped food basket consisting of crackers and salami and an indentation on the tissue paper where a jar of caviar had been removed. Her mother got a fancy handbag that contained a used Kleenex.

Mary recounts the battle over her grandfather Fred Trump’s will, countering her family’s depiction of her as disgruntled and money-grubbing: “Wills are about money, but in a family that has only one currency, wills are about love.” But how could it be about love when her book suggests there wasn’t any? It might be more accurate to say that wills are about power, and that the family also traded in humiliation. Just as Donald couldn’t bear being poor, he couldn’t tolerate feeling shame.

This is a book that’s been written from pain and is designed to hurt. Recalling her decision to share financial documents with a team of New York Times reporters who would write a 14,000-word article on the Trumps’ tax schemes in 2018, Mary describes feeling so damaged by her grandfather’s cruelty “that only a grand gesture would set it right.” Forget the psychologist’s vocabulary of childhood attachment and personality disorders; it’s when Mary talks about her need “to take Donald down” that she starts speaking the only language her family truly understands.