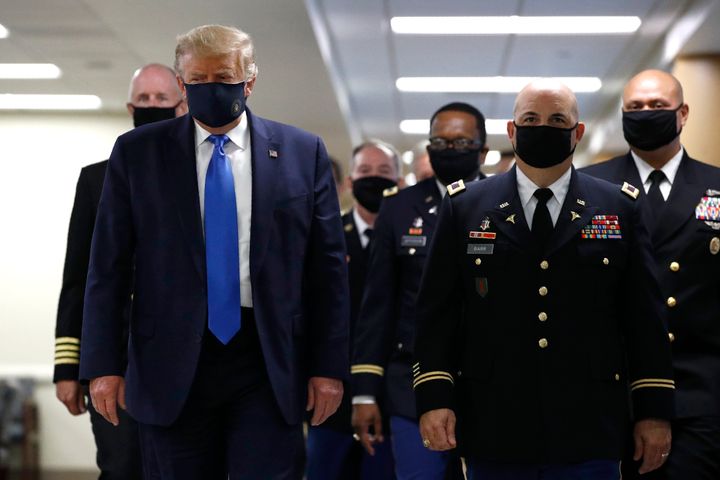 It took four months into the coronavirus pandemic and 134,000 Americans dead for President Donald Trump to get the message to wear a face mask.  For the first time in public, on a visit to Walter Reed National Military Medical Center yesterday, Trump was seen with a face mask.

The Centers for Disease Control and Prevention in early April began recommending that people wear them when they cannot maintain social distance. The agency even released a helpful guide to show you how to make one.

Pressure has mounted for weeks on Trump to set a good example by wearing a mask for the cameras because of skyrocketing case counts in much of the country. Until today, he resisted the idea. Trump was required to put on a mask during a visit to a Ford plant in May, but he made a point to take it off right away.

“I didn’t want to give the press the pleasure of seeing it,” Trump said at the time.

He began to change his tone in late June, saying he had no problem with masks and was actually a fan of them. On July 1, Trump claimed that he liked the way he looked in a mask, believing it made him look like the Lone Ranger.  [Note: the Lone Ranger covered his eyes with a mask not his nostrils and mouth.]

But at the few rallies and speeches Trump has held since the crisis started, crowds appeared to take their cues from the president ― leaving their masks at home.

Now Trump has taken one baby step to encourage widespread mask usage in the deadly pandemic.

“I think it’s a great thing to wear a mask,” Trump said yesterday, adding, “They have a time and place.”

The time is now. The place is anywhere there are people you don’t live with.

Sorry, Trump, the time was four months ago.  Smart people understood that and accepted the advice of experts like Anthony Fauci.